Home Politics US Activists against Bennett’s Visit to Washington 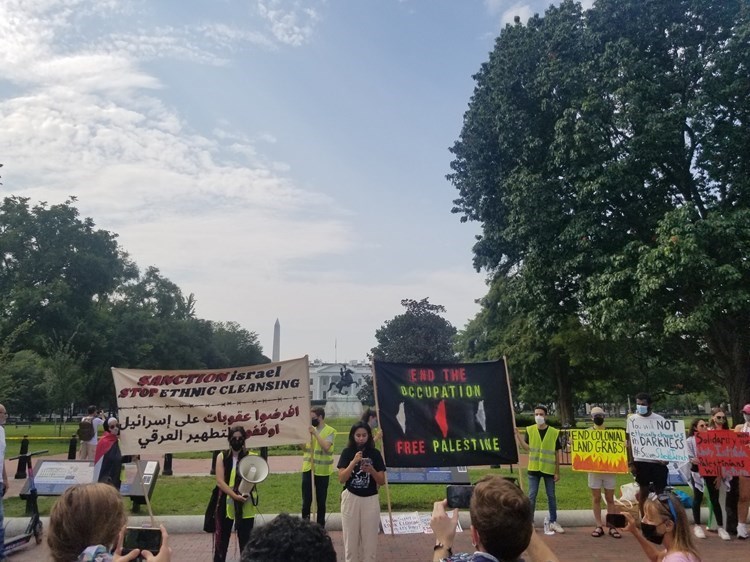 Dozens of American activists gathered in front of the White House yesterday, Thursday, to protest against Israeli Prime Minister Naftali Bennett’s scheduled visit to meet with US President Joe Biden before the meeting got postponed due to the recent events in Afghanistan.

Who is against the visit?

A group of US organizations organized the demonstration, including Americans for Justice in Palestinian Action, the American Campaign for Palestinian Rights, the Justice Project, and the Youth Movement.

Activists called on Biden to pressure “Israel” to stop its violations and arbitrary measures against the Palestinians, to abandon support for the apartheid regime, and to freeze Israeli expansion and settlement in the Palestinian territories.

In an electronic petition, the activists proposed stopping the annual military aid for the occupation forces estimated at $3.8 billion, not making new arms contracts, including abandoning the “Iron Dome” support, and investigating the occupation force’s use of US weapons in killing and wounding Palestinians in violation of international law and US laws.

What’s on the table?

The US President will meet with the Israeli Prime Minister at the White House to discuss several issues, the most important of which is the Iranian nuclear project.

On the other hand, Bennett’s advisers confirmed that the Prime Minister does not plan to discuss the resumption of negotiations concerning the establishment of a Palestinian state on the territories annexed by “Israel” in 1967.

Bennett believes that the first task of his visit is to pressure Washington to block a return to the nuclear agreement, pledging to present a “systematic plan” to Biden on the Iranian issue.

The postponement of the meeting and the killing of about 13 US soldiers in Afghanistan during the Kabul bombings will, according to Haaretz newspaper, “reduce the possibility that Bennett will reap political gains from the meeting.”