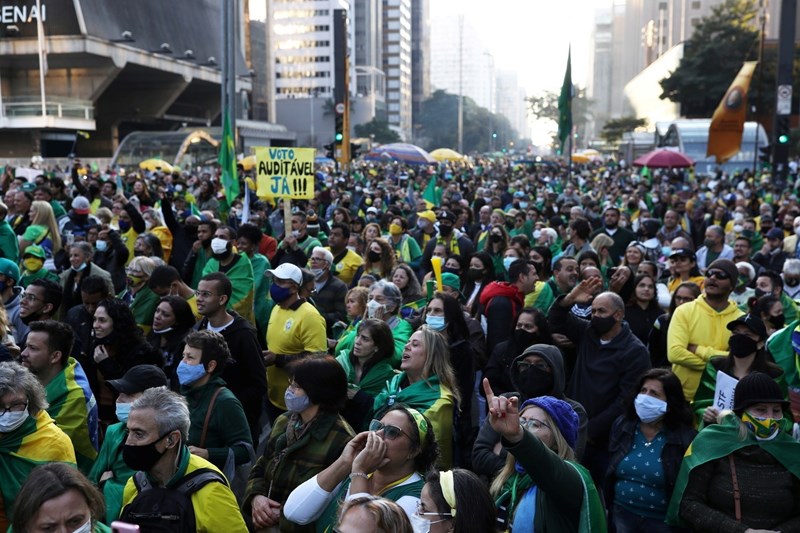 Supporters of Brazilian President Jair Bolsonaro crossed police barriers to advance towards Congress in Brasilia, yesterday, Monday evening, in support of the right-wing leader in his dispute against the judiciary, according to Reuters.

Videos posted on social media showed trucks sounding their horns, as hundreds of Bolsonaro supporters, dressed in green and yellow, were chanting. However, the protestors failed to reach their goal of surrounding the Supreme Court, which some protesters planned to invade, unlike former US President Donald Trump’s supporters who managed to enter the US Capitol last January 6.

The city’s security department stated that the courtyard of the Supreme Court building is still closed with barriers and a police line.

Today, Tuesday, thousands of protesters are expected to march in the capital on Brazil’s Independence Day and in Sao Paulo’s financial center to support Bolsonaro in his dispute against the judiciary over changes implemented to the voting system. Critics fear the president’s encouragement might lead his supporters to try to storm the court.

In this context, more than 150 left-leaning former presidents and party leaders from around the world have signed an open letter criticizing Bolsonaro for encouraging what they described as “a tradition” of storming the Capitol. He refers to the January 6 incident, which was organized by Trump supporters in the US.

The letter also stated that the demonstrations raise fears of a coup in the third-largest democracy in the world.

On Friday, the Brazilian president said that the demonstrations will be a warning to Supreme Court judges who have taken “unconstitutional” decisions against his government.