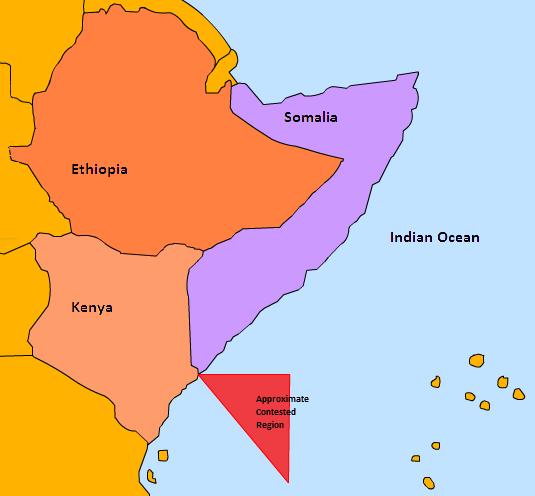 The International Court of Justice (ICJ) has ruled in Somalia’s favor in a major territorial row over a tract of sea believed rich in oil and gas, after a years-long dispute with Kenya, which has refused to recognize the decision.

In a lengthy 79-page judgement, the UN’s top court ruled largely on the side of Mogadishu on Tuesday, backing most of its claim to a 100,000 square-kilometer (38,000 square-mile) area off the East African coast, which is thought to contain large petroleum reserves. The judges determined there was “no agreed maritime boundary” set in the area, and drew a border line mostly consistent with Somalia’s territorial claims.

While the ruling came as a blow to Nairobi, the ICJ did adjust the border line slightly north, partially fulfilling Kenya’s request, and unanimously rejected a claim by Somalia that Kenya had previously violated international law and the “sovereign rights and jurisdiction of Somalia.” Mogadishu had demanded damages over the spat, but was denied any compensation by the court.

Somalia brought the case to the ICJ in 2014 after failing to resolve the dispute through other mechanisms, but it has seen a long series of delays and postponements since. Kenya has strongly objected to Mogadishu’s claims all along, and effectively withdrew itself from the legal proceedings last March, claiming it was not given enough time to prepare its case and that the ICJ judgement would be biased given the presence of a Somali national, Abdulqawi Yusuf, on the legal panel overseeing the case.

Though the court said on Tuesday that it “regrets Kenya’s decision not to participate in the oral proceedings held in March 2021,” it noted that it nevertheless had “extensive information about Kenya’s views” and could therefore decide on the case. Summarizing the ruling, chief judge Joan Donoghue said the ICJ “is thus satisfied that the adjusted line… achieves an equitable solution” despite Nairobi’s objections.

In a statement circulated in local media, Kenya’s president, Uhuru Kenyatta, denounced the ruling, insisting that Nairobi would not accept the court’s decision, as “international tribunals have jurisdiction only to the extent of consent by a state.”

“At the outset, Kenya wishes to indicate that it rejects in totality and does not recognize the findings in the decision,” the statement read, adding, “The decision embodies a perpetuation of the ICJ’s jurisdictional overreach and raises a fundamental question on the respect of the sovereignty and consent of states to international judicial processes.”

” This decision… will strain the relations between the two countries. It will also reverse the social, political and economic gains; and potentially aggravate the peace and security situation in the fragile Horn of Africa Region. “

The Kenyan leader vowed to continue to pursue the matter “through institutions of the African Union,” rather than the United Nations-led mechanism under the ICJ.

Mogadishu, for its part, called on its neighbor to “respect the international rule of law” and abide by the court’s ruling, with Somali President Mohamed Abdullahi Mohamed deeming the decision “fair” and an “opportunity to strengthen the relationship of the two countries.” Kenya’s vocal objections, however, have already signaled further drama over the issue in the future.

While the ICJ judgement is final, allowing Kenya no ability to appeal, the body has no way to enforce its rulings, effectively relying on member states to participate voluntarily. Members can, however, bring disputes to the UN’s Security Council to seek an enforceable resolution in the event another state fails to obey a judgement. Somalia has yet to launch a formal process in the UNSC, and it remains unclear how the country will proceed should Kenya disregard the ICJ’s ruling.

The contested area is thought to contain large oil and gas deposits, and is a lucrative site for fishing vessels. Kenya has exercised de facto control over the region since 1979, insisting it falls within its formal territory, and has already granted exploration permits to European energy firms despite Somalia’s repeated objections. Given the ICJ’s ruling, the fate of any potential drilling deals with overseas companies is now in limbo.