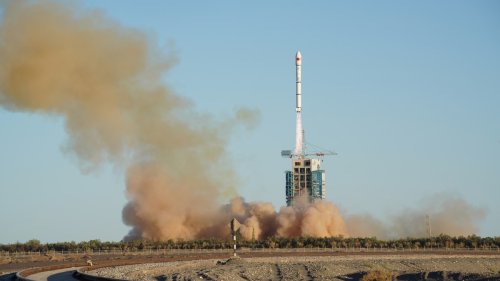 China said Monday its launch of a new spacecraft in August was merely a test to see whether the vehicle could be re-used, denying a Financial Times report that they had tested a rocket carrying a hypersonic missile, as the US expressed concern about hypersonic missile technology and its potential military applications by China and Russia.

China‘s Foreign Ministry spokesperson Zhao Lijian said on Monday the August launch involved a spacecraft rather than a missile and was of “great significance for reducing the use-cost of spacecraft and could provide a convenient and affordable way to make a round trip for mankind’s peaceful use of space”.

The Chinese official comments came after the Financial Times reported on Saturday that China had launched in August a rocket carrying a hypersonic glide vehicle that flew through space, circling the globe before cruising down toward its target, which it missed by about two dozen miles.

Hypersonic missiles travel at more than five times the speed of sound in the upper atmosphere, or about 6,200 km per hour (3,850 mph). This is slower than an intercontinental ballistic missile, but the shape of a hypersonic glide vehicle allows it to manoeuvre toward a target or away from defences.

Combining a glide vehicle with a missile that can launch it partially into orbit — a so-called fractional orbital bombardment system (FOBS) — could strip adversaries of reaction time and traditional defence mechanisms.

China’s space program is run by its military and is closely tied to its agenda of building hypersonic missiles and other technologies that could alter the balance of power with the United States. Zhao’s comments on the August test came days after China launched a second three-person crew to staff its space station on a six-month mission.

“China will work together with other countries in the world for the peaceful use of space and the benefit of mankind,” Zhao said.

The US expressed concerns over the Chinese so-called “routine tests”.

“We have concerns about what China is doing on hypersonic,” US disarmament ambassador Robert Wood told reporters in Geneva on Monday after a report that Beijing had tested a nuclear-capable hypersonic missile.

“We just don’t know how we can defend against that type of technology, neither does China or Russia,” he said, referring to the difficulty of missile defence systems tracking such high-speed weapons that can manoeuvre and evade shields.

Alongside its space program, China’s expansion into hypersonic missile technology and other advanced fields has raised concerns as Beijing becomes increasingly assertive over its claims to seas and islands in the South China and East China Seas, and to large chunks of territory along its disputed high-mountain border with India.

Japan, one of China’s chief regional rivals, said it would boost its defences against what it interpreted as a new offensive Chinese weapon.

Chief Cabinet Secretary Hirokazu Matsuno on Monday called it a “new threat” that conventional equipment would have difficulty dealing with. He said Japan will step up its detection, tracking and shooting-down capability of “any aerial threat”.

China appears to be rapidly pushing development of hypersonic nuclear weapons to gain strike capability that can break through missile defences, Matsuno said.

He criticized China for increasing its defence spending, particularly for nuclear and missile capabilities, without explaining its intentions.

“China’s rapidly expanding and increased military activity at sea and airspace has become a strong security concern for the region including Japan and the international society,” Matsuno said.