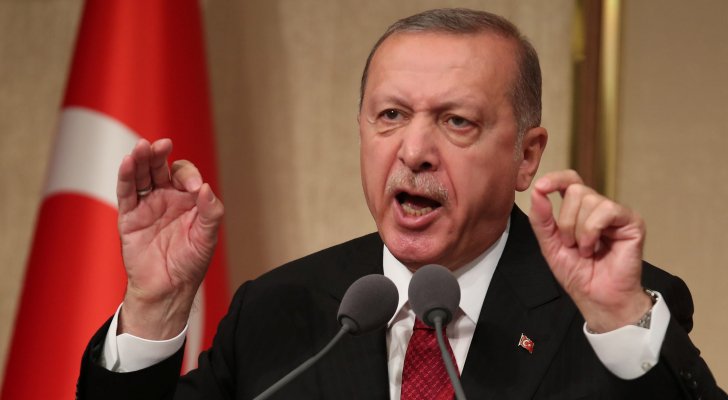 Erdogan threatens use of heavy weapons against Syrian army in Idlib

Turkish President Recep Tayyip Erdogan has reiterated support for terrorist groups in Syria’s northwestern province of Idlib, warning that if necessary Ankara can use heavy weapons against Syrian government forces in the area.

“Operations are going on in very sensitive locations in our region,” Erdogan was quoted by Turkish broadcaster Haberturk as saying on Thursday. “We will not back down. We continue the process in Syria. … We will do whatever is needed in Idlib, we will respond with all our heavy weapons. We will not leave the situation as it is.”

Erdogan’s warning cames as Syrian media reports said Ankara, which has been backing a number of anti-Damascus militant groups, had brought in a new convoy that included dozens of vehicles loaded with military equipment and logistical materials to support terrorist groups in Idlib and some areas in its countryside.

“The Turkish occupation forces brought in two batches of vehicles, including 31 trucks and military vehicles loaded with logistical equipment, ammunition, weapons and cement blocks, through Kafr Lusin village, adjacent to the Turkish border, to support terrorist mercenaries in Idlib city and several areas in the countryside of the province,” Syria’s official news agency SANA cited local sources as saying.

Syria has been gripped by foreign-backed militancy since March 2011.

Idlib is in the last major stronghold of the foreign-backed terrorists fighting against the legitimate government of Syrian President Bashar al-Assad.

The Syrian army has already regained almost all territories once controlled by terrorists, except portions of Aleppo and large swaths of Idlib, home to Takfiri terrorists, particularly the Hayat Tahrir al-Sham.

The terrorist group is a coalition of different factions of al-Qaeda-linked outfits largely composed of Jabhat Fateh al-Sham, formerly known as al-Nusra Front.

Damascus says Western governments and their regional allies are aiding the terrorist groups wreaking havoc in the Arab country.

The Turkish president requested on Wednesday a two-year-long authorization from parliament to deploy occupation forces to Syria and Iraq amid Ankara’s renewed military threats against Kurdish militants in the two countries.

Erdogan claimed that land borders with Iraq and Syria were still carrying risks and threats against Turkey’s national security.

The Turkish president said that Kurdish People’s Protection Units (YPG) militants had been continuing “separatist” activities in Syria, and Ankara had been taking additional measures to maintain the peace and stability in the areas where they operate.

“We have no patience left in some areas that are a source of terror attacks aimed at our country from Syria,” Erdogan said after chairing a cabinet meeting. “We are determined to eliminate the threats emanating from Syria with our own means. We will take the necessary steps in Syria as soon as possible.”

In 2019, Turkish troops carried out a cross-border offensive in northeastern Syria — the third such operation since 2016 — in an attempt to clear YPG militants from border areas and establish a “safe zone” there.

Ankara views the YPG as a terrorist organization tied to the homegrown Kurdistan Workers’ Party (PKK), which has been seeking an autonomous Kurdish region in Turkey since 1984.

The Kurdish-led administration in northeastern Syria says the Turkish offensive has killed hundreds of civilians, including dozens of children since it started.

The Damascus government has repeatedly slammed violations of the Arab country’s sovereignty, calling on the Turkish military to withdraw its forces and end its occupation of the Syrian soil.