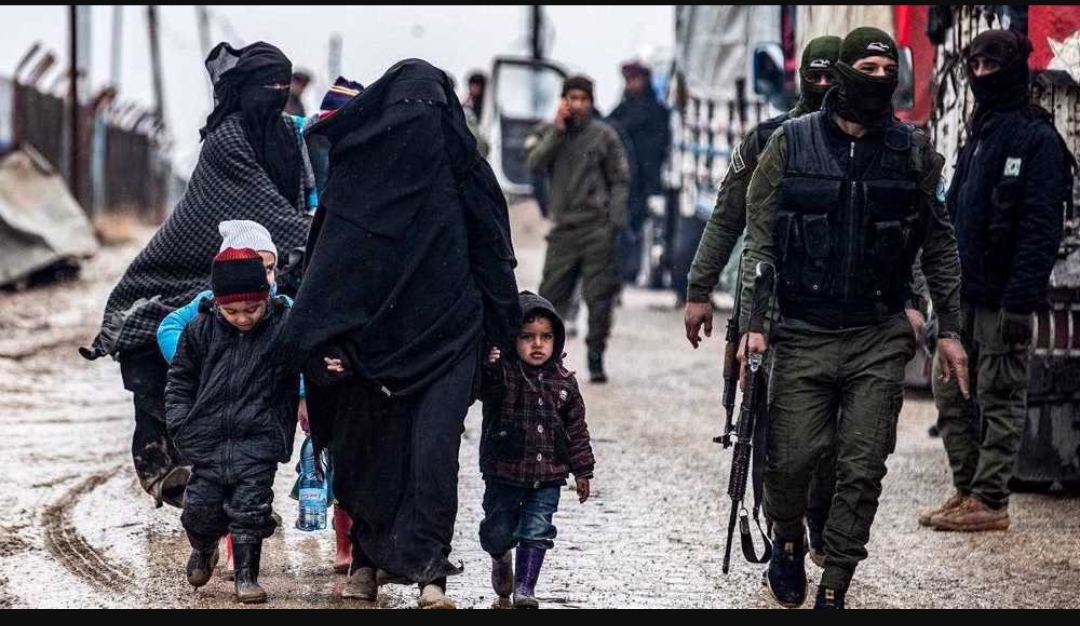 The Asayish is the US-backed Kurdish intelligence agents in Syria.  They report to the US forces illegally occupying Syria the locations of armed groups backed by Iran who is fighting ISIS in Syria.  The US uses this information by targeting the groups that fight ISIS in Syria.

US forces relocated ISIS members from the al-Hawl camp in Syria to Iraq in early October.  The camp, which acts as a prison occupied by thousands of ISIS men, and their women and children, is run by the US-backed Kurdish militias SDF and YPG.

The transfers took place under the supervision of the Asayish from the so-called Autonomous Administration of North and East Syria  (AANES), also known as Rojava.

Last April, Russian Foreign Minister Sergei Lavrov said the US was using ISIS to block a political solution to the crisis in Syria and supporting separatist militants in a flagrant violation of international resolutions.

The US military transfer of ISIS prisoners to the Iraqi-Syrian border provides a pretext for the US’s continued occupation in Syria.

In May 2020, several captured ISIS terrorists confessed to close cooperation with US military forces stationed at the al-Tanf base in the central Syrian province of Homs on carrying out various acts of terror and sabotage.

Televised confessions revealed the terrorists were instructed by US forces to target Syrian government troops in and around the ancient city of Palmyra, the Tiyas Military Airbase – also known as the T-4 Airbase, the Shaer gas field as well as nearby oil wells.

“Once a close aide to our commander Hassan Alqam al-Jazrawi came to me and said he was in contact with the Americans at the al-Tanf base. The man, whose name was Hassan al-Wali, added it was necessary to target Palmyra and T4 Airbase, and that US forces would provide us with rocket launchers and machine guns, besides financial support, cars, and whatever we needed,” one of the terrorists said on TV.

The US attacks on Iran in Syria

In February, US aircraft bombed a border-control point in Syria used by Kataib Hezbollah and Kataib Sayyid al-Shuhada, who are Iranian-backed militias fighting ISIS. The airstrike was the first military action undertaken by the Biden administration.

“I’m confident in the target that we went after, we know what we hit,” said Defense Secretary Lloyd Austin to reporters flying with him to Washington.

Mary Ellen O’Connell, a professor at Notre Dame Law School, criticized the US attack as a violation of international law.  “The United Nations Charter makes absolutely clear that the use of military force on the territory of a foreign sovereign state is lawful only in response to an armed attack on the defending state for which the target state is responsible,” she said. None of those elements is met in the Syria strike.

In June, the US said it had carried out airstrikes against Iranian-backed militias near the Iraq-Syria border. A Pentagon spokesman said the strikes targeted “operational and weapons storage facilities” at three locations.

A powerful Iraqi militia alliance, the Popular Mobilization Forces (PMF), said four members of one faction were killed. The PMF is a coalition of mostly Iranian-backed militias that was formed in 2014 to fight ISIS and was incorporated into the Iraqi Government Security Forces three years ago.  The US airstrikes killed four fighters carrying out an officially sanctioned mission to prevent ISIS militants from infiltrating Iraq.

Syrian state media reported that a child was killed in the US airstrike near the Syrian border town of Albu Kamal, and accused the US of seeking to undermine efforts to improve stability in the area.

The Syrian government has had support from Iranian-backed militias during the Syrian crisis, and they have a significant presence in the border region preventing ISIS from re-emergence.

The Syrian Observatory for Human Rights (SOHR), a UK-based monitoring group, said seven militia fighters were killed in US airstrikes near Albu Kamal, where facilities were targeted at two locations in Syria and one inside Iraq that were used by several Iranian-backed groups, including Kataib Hezbollah and Kataib Sayyid al-Shuhada.

US media reported that the strikes were the second round targeting Iranian-backed militias in Syria ordered by President Biden, and were carried out by US Air Force F-15s and F-16s using satellite-guided munitions.  The locations of the strikes were provided by the Asayish.

Who are the Asayish?

The Asayish is the Kurdish intelligence agents operating in the Kurdistan region in Iraq. The organization was established in September 1993.  Their counterpart is located in North-East Syria, in the so-called Rojava area.  The Asayish in Syria operates primarily as the secret agents for the US occupation forces.  They report all locations of the Iranian-backed groups fighting to keep ISIS from re-emerging.

In November 2019, it was reported that Asayish agents had detained an Assyrian journalist named William Bnyameen Adam for nearly two weeks following a report on his trip to Northern Syria. Adam claimed that Asayish had confiscated his equipment, beaten him, and interrogated him about his reporting. An earlier API statement claimed that Adam and his family had previously received death threats from members of the Kurdistan Democratic Party as a result of his criticism of high-ranking Kurdistan Region officials.

In January, the Asayish besieged the area in Al-Qamishli and Al-Hasakah cities. SOHR activists said that the Asayish continued to prevent food and goods from entering the security zone in Al-Hasakah city and imposed a fine on anyone who violated this decision. The SOHR added that dozens of civil servants of the Damascus-based government staged a protest outside the justice department in the city of Hasakeh, in protest against the continued siege imposed by Asayish for the fifth day in a row preventing the entry of goods and food.

The market of Al-Qamishli city was closed due to clashes which left four Syrian government soldiers injured, while Asayish snipers were stationed on houses’ roofs.

The AANES, also known as Rojava, is a region in northeastern Syria. It consists of the areas of Afrin, Jazira, Euphrates, Raqqa, Tabqa, Manbij, and Deir Ez-Zor. The region claimed its de facto autonomy in 2012, during the Syrian conflict.  Its’ official military force, the Syrian Democratic Forces (SDF) became the US partner in the fight to defeat ISIS.  Rojava is not officially recognized as autonomous by the government of Syria or any state or organization, including the US and the UN.

AANES and the SDF are based on a socialist political ideology, while their alliance with the PKK recalls their communist ideology foundation. The leadership claim they want to be part of a partitioned Syria, rather than have outright independence.

Why is the US in Syria illegally?

The US military invaded Syria under the guise of fighting ISIS.  The US occupation serves political goals:  it prevents the Syrian government in Damascus from repairing their relationship with the Kurds, maintains control over the largest oil fields in Syria, thus preventing Syria from rebuilding after the devastation of a 10-year war, and the oil revenues stolen from the oil field provides financial support for the US-backed “Rojava”, instead of asking the US Congress for funds.  The US occupation prevents the Syrian war from concluding and prolongs the suffering of the Syrian people, both inside the borders, and outside.  The US occupation of Syria is a project aimed at ‘regime change, which after 10-years of effort, the US has failed at.