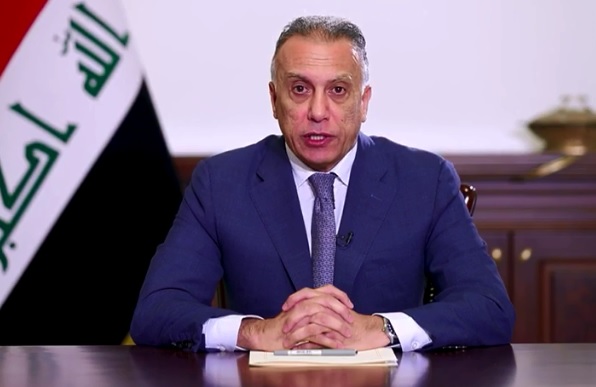 Iraq’s National Security Council formed a committee to investigate the assassination attempt on Iraqi Prime Minister Mustafa Al-Kadhimi, who was targeted on early Sunday morning by three explosives-laden drones, two of which were intercepted.

Kadhimi appeared only lightly injured, wearing a bandage on his wrist, in a video soon after the attack on his residence in the Green Zone.

According to sources who spoke to Reuters on Monday, the attack was carried out by at least one Iranian-backed militia group and said the drones and explosives used in the assault were Iranian-made.

Two Iraqi security officials said that the powerful Kataib Hezbollah and Asaib Ahl al-Haq groups carried it out in tandem, while one militia source said that Kataib Hezbollah was involved and that he could not confirm the role of Asaib. It was reported Kadhimi had been threatened before the attack by Qais Al-Khazali of the Asa’ib Ahl Al-Haq militia.

The political wings of the Iraqi militias suffered heavy losses in October’s parliamentary elections and hundreds of supporters have protested outside Baghdad’s fortified Green Zone in recent days, with protests turning deadly on Friday where at least one protester was killed, with a further 120 injured.

Abu Ali al-Askari, the leader of the Kataib Hezbollah militia, denied his group’s involvement in the attack.

Iran and Iraq both have majority Shiite populations. The failed assassination attempt follows last month’s parliamentary elections, in which the Iran-backed militias were the biggest losers. Several activists, both Shiite and Sunni, were killed after calling for the end of Iranian interference in Iraq.

Kadhimi has warned of the dangers of allowing the development of a state within a state and has sought closer ties with Iraq’s Arab neighbors, especially Saudi Arabia and the UAE.

Kadhimi told the Council of Ministers that he knew who had tried to kill him. “We will pursue the perpetrators of Sunday’s crime. We know them very well and we will expose them,” he said.

The Commander of Iran’s Quds Force, Brig-Gen Esmael Qaani, flew to Baghdad on Sunday afternoon and met Kadhimi and President Barham Salih, according to two government officials. Iran has denied any involvement in the attack.

The attack has raised tension in Iraq after a general election was disputed by Iran-backed militias including Kataib Hezbollah and Asaib. The political parties that represent Iran-aligned paramilitary groups in parliament suffered crushing defeats at the polls on Oct. 10, losing dozens of the seats they have controlled for several years.

The State of Law bloc led by former Prime Minister Nouri al-Maliki came third with 34 seats in parliament, followed by the Kurdistan Democratic Party with 32 seats, the results showed. According to the results, the Azem Alliance of Iraqi millionaire Khamis Khanjar won 12 seats, the Patriotic Union of Kurdistan got 16 seats, the Al-Fatah Coalition won 17 seats, the Imtidad Movement and the New Generation Movement got 9 seats each, while independents won 40 seats. The election commission said turnout in the vote reached 43%.

The polls saw 3,249 candidates representing 21 coalitions and 109 parties vying for seats in the assembly. The elections were originally scheduled for 2022 but were moved up following mass protests that erupted in 2019 against deep-seated corruption and poor governance.

Kadhimi has opened an investigation into violent protests against last month’s election, with at least four people killed on Friday after security forces opened fire to clear demonstrators in Baghdad.

The electoral commission began a recount and so far, the results have not changed, while people are increasingly frustrated at Iraq’s political system.

The elections held on Oct. 10 decided the Council of Representatives who will, in turn, elect the Iraqi president and confirm the prime minister. 25 million voters were eligible to take part in Iraq’s fifth parliamentary election since the 2003 US-led invasion.

The 2021 elections were conducted under a single non-transferable vote in 83 multi-member constituencies.  Seats are divided by religious sect, ethnicity, and gender. The Commission reported voter turnout was 41.05%, based on 9,077,779 voters out of 22,116,368 eligible.

The Kurdistan Democratic Party, which ran independently rather than as part of a multi-party coalition list, won a total of 33 seats, making it Iraq’s single largest political party.

Iraq was destroyed politically, physically, and socially by the US attack on Iraq for the sole purpose of ‘regime change’.  The country’s infrastructure has never been repaired, and many Iraqis do not have adequate electricity, water, food, or medicines.  The political chaos in Iraq is a direct result of the sectarian system the US imposed on Iraq after the initial invasion in 2003.  America has a secular government, where lawmakers are voted into office based on popularity, and not which religion they were born into.  Iran is the Islamic Republic and is Iraq’s Eastern neighbor, while Syria sits to the West and is the only secular government in the Middle East.  Syria also was attacked by the US-NATO war machine for ‘regime change’ starting in March 2011.  However, Syria was able to resist the onslaught of Radical Islamic terrorists, formerly supported by the US, EU, and NATO.  Iraq is in the middle, and the painful process of a fledgling democracy tainted by a sectarian influence.