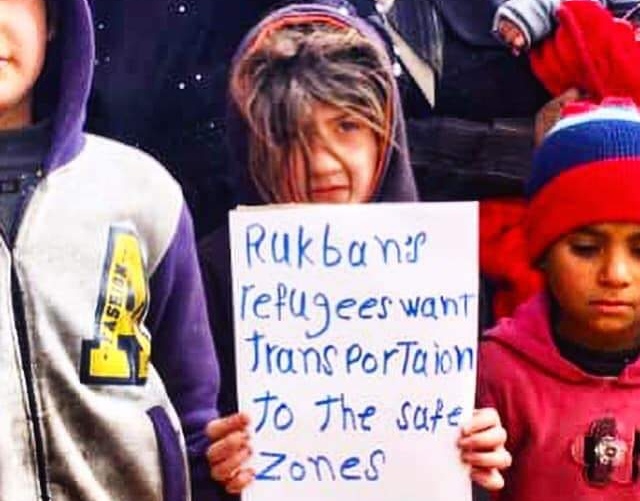 On the Syrian-Jordanian border, just miles from the illegal US military base at Tanf, about 10,000 civilians are being held as captives to be used as leverage in the political solution to the Syrian conflict.  In April, the US Ambassador to the UN, Linda Thomas-Greenfield, condemned the situation when she said, “deep moral wrong happening in Rukban.”

The Syrian government has offered safe passage for civilians from Rukban to return to areas in Syria that are safe, and hundreds have taken up the offer. However, the US has not assisted in the process because the US policy in Syria centers on using Syrian residents as bargaining chips.

James Jeffrey, the US special representative for Syria, has explained that the US has no intention of providing food or medical supplies for the people detained in the Rukban camp.

Rukban has no surgeon, and pregnant women who may need a cesarean section are in danger, while the US garrison nearby at Tanf has medical personnel and supplies.  A Rukban resident who asked to be identified as Abu Khaled said, “But when one of our children or women gets sick, they die in front of the American army, even though they have a medical team equipped with everything.”

The illegal US garrison at Tanf was established in 2016 at the intersection of Syria’s borders with Jordan and Iraq and is home to about 200 US service members. The base serves as leverage in the long-running negotiations over Syria’s future and sits along one of the main highways between Baghdad and Damascus. Syrians were lured to the Rukban camp thinking they would benefit from the 34-mile US-protected ‘deconfliction zone’.   At its height, Rukban was home to over 50,000 Syrian internally displaced persons, though this number has dwindled to around 10,000 as residents returned to safe areas under Syrian control.

Tanf has been a training base for a Syrian armed opposition group.  Madhawir al-Thawra (MaT) are armed fighters who were from the Deir Ez Zor area, and they number about 300, while their wives and children are housed at Rukban and live among the displaced people. The MaT is on the US military payroll and is in control of the humanitarian aid which is to be dispersed among the residents at Rukban; however, in practice, the US-backed mercenaries’ horde supplies for their families, while depriving the others in the camp and have been selling some goods to those who have cash.  The humanitarian aid does not come from the US government, but the UN and other aid agencies. The US military has been criticized by Syrian aid groups for not providing the most basic supplies from their base nearby.

Jordan has said that the residents in Rukban are mostly from areas such as Raqqa, and Deir Ez Zor, which had been occupied by ISIS, and that ISIS sleeper cells are among these displaced persons.

On June 21, 2016, a car crossed over from Rukban and reached a Jordanian army outpost designated for the distribution of humanitarian aid to Syrian refugees. The car exploded, killing 6 and injuring 14 Jordanian soldiers.

Nasser Judeh, Jordanian minister of foreign affairs, said, “We don’t need a hideous terrorist attack like this one to prove to the world the legitimacy of our security concerns”. He added, “we will not put the lives of our soldiers and our country at risk because this is not Jordan’s problem alone, this is an international responsibility.”

On August 23, 2018, Russian spokeswoman Maria Zakharova, said that hundreds of ISIS and Jabhat al-Nusra members were hiding among the residents of Rukban and using them as human shields, with the knowledge of the US military at Tanf.  In September 2016, Alice Wells, the US Ambassador to Jordan, said that the Rukban camp housed a variety of different people possibly including armed groups and terrorists.

Jordan has warned of the terrorism threat posed by the Rukban camp, while at the same time using Rukban as a dumping-ground for Syrian asylum seekers it has deemed deportable.

The US allies Kurds and stealing oil

The US has looted Syria’s oil resources in the northeast where the largest oil fields are located, such as the Conoco, al-Omar, and al-Tanak on the left bank of the Euphrates, which lie in the area under the occupation of the US Kurdish allies, the SDF, who are actively involved in smuggling oil from Syria, and in exchange, the US supply the SDF with weapons.

The activities of pro-US mercenaries in a smuggling business taken by Washington from ISIS have exacerbated the situation in the war-torn region. In this strategy, the US is using the revenues from illegal oil sales to finance the SDF militants loyal to them, and the MaT.  The US is bleeding the Syrian economy by maintaining a fuel crisis in the oil-producing country.

On November 8, a long convoy of stolen Syrian oil was spotted in SDF territory, which stretched for several kilometers.  A drone camera captured the convoy of oil tankers in Qamishli heading east into Iraq. Earlier, another convoy of 40 trucks was spotted carrying weapons for the SDF.

Rukban is a completely arid remote area that became inhabited by many Syrian refugees in 2014 and has an estimated 3,000 children now. Most earlier residents arrived at the tented camp in late 2015 after fleeing parts of central Syria then under ISIS control.

“President Assad met with the Presidential Commissioner for Children’s Affairs Maria Lvova-Belova and the Russian delegation. During the meeting, the sides condemned the plight of children in the Al Hol and Roj camps, and (discussed) the joint efforts of Russia and Syria to evacuate children from these camps despite obstacles set by some Western countries,” the official statement read.

President Assad explained that Western countries continue to politicize humanitarian issues, aiming to turn the camps into breeding grounds for terrorism, and he called for the evacuation of children from these camps and their total closure.

Lvova-Belova pointed to the importance of developing mechanisms for interaction between organizations and committees in Syria and Russia to help rehabilitate children who left the camps.

In August, the United Nations estimated that about 59,000 people are staying at Al Hol, and noted that the camp faces major security issues.

There are hundreds of camps in Syria, most of them located in territories not controlled by the official government. Moscow and Damascus have consistently urged the US to facilitate the closure of the two largest, Rukban and Al Hol, over terrible conditions and potential terrorist activities.