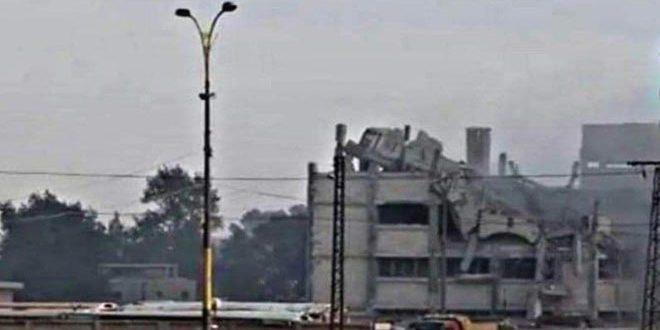 Hasaka, SANA- The US occupation warplanes completely destroyed the Technical Institute building in Hasaka city under the pretext that a number of the escapees from the Industrial Secondary prison have hidden in it, meanwhile QSD militia imposed a curfew on the city.

SANA reporter said that US helicopters were still flying as clashes in the vicinity of the prison, al-Zohour and Ghwairan neighborhoods between QSD militia and members of Daesh terrorist organization and the escapees from prison went on.

The militia’s repressive practices against locals while storming houses of the neighborhoods, with the help of the US aircraft, forced them to flee the area.

Meanwhile, Russian Defense Ministry warned that the US occupation forces resort to warplanes while hunting escapees from the prison would threaten the lives of civilians as well as infrastructure.