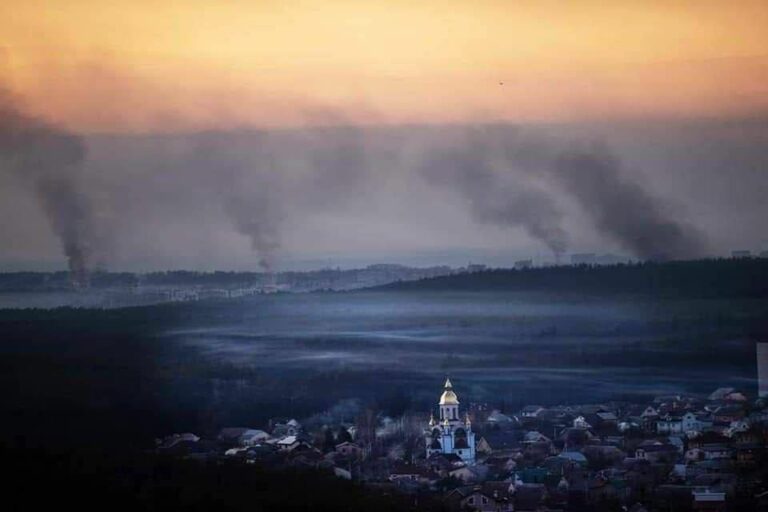 March 24 marked a month of the Russian military operations in Ukraine. After the Russian blitzkrieg thrust in the first days and Kiev’s incapacity to negotiate with Moscow, Russian troops together with DPR and LPR forces have moved to the implementation of their goals by military means, orderly destructing military infrastructure all around Ukraine and eliminating the AFU grouping in the eastern regions.

The speed of Russian advance raises doubts about the success of the Russian tactics. On the other hand, the AFU are yet to claim any strategic victories. While the most powerful AFU groupings are surrounded or risk to be surrounded in the near future, the attrition war seems to be working in Russia’s favor.

By the morning of March 24, the units of the Russian army took control of the city of Izyum in the Kharkiv region. The claims were confirmed by the Russian Ministry of Defence. Fierce clashes continue in the village of Kamenka, where the AFU is trying to prevent the Russian advance to the Slavyansk-Kramatorsk region and Barvenkovo town. After Russian forces break through the Ukrainian defence in the region, they could cut off the road and advance dozens of kilometres to the southern direction.

In their turn, LPR forces are trying to encircle the Severodonetsk-Lisichansk region, continuing their offensive in the direction of Popasnaya, Bakhmut, and Soledar with the aim of flanking the AFU grouping in Severodonetsk from the south and the southwest. After the town of Rubezhnoe, located in the north-western outskirts of Severodonetsk was taken by the LPR, no other successes were confirmed in the region.

The units of the DPR People’s Militia are advancing in the town of Maryinka. They are slowly advancing street by street, pushing Ukrainian soldiers to the western outskirts of the town. Local military reporters confirm that numerous foreign-made weapons, as well as bodies foreign mercenaries killed in the clashes, were discovered in the area. The full control over the town by the DPR is yet to be claimed.

Another important battlefield for the DPR forces is the village of Avdiivka, from where the AFU have shelling civilians in Donetsk and nearby villages for years. Taking into account that the AFU positions in the region have been fortified during the years of war, DPR troops avoid entering the town  and are slowly encircling Avdiivka from the north. Meanwhile, the Russian Aerospace Forces (VKS) and DPR artillery continue shelling of the AFU positions near Avdiivka nonstop.

While Russian troops are encircling the whole AFU grouping in the Donbass region, DPR forces deployed in Donetsk with support of the Russian VKS are suppressing enemy positions on the city’s outskirts in order to stop shelling by Ukrainian forces on local civilians.

According to the DPR representative in the JCCC, in 35 days, 62 civilians were killed, another 466 were injured, including children.

In the city of Mariupol, DPR forces continue the mop up operation. So far, about 70% of the city were taken under the control of the joint Russian and DPR forces.

In the other regions of Ukraine, Russian ground forces are not actively moving.

In the Kiev region, Russian troops are conducting tactical-level operations in order to deplete the AFU military potential in the region. The AFU command is forced to keep troops there and attempt counterattacks, which lead to heavy losses.

In order to prevent the AFU from moving their military from Nikolaev, Odessa, Zaporozhie, Russian forces do not enter the cities.

Mine clearance in the Kherson region:

Meanwhile, military facilities of the Ukrainian armed forces are being constantly destroyed by high-precision long-range naval and air-based weapons.

On the evening of March 23 and the night of March 24, 13 launchers of anti-aircraft missile systems were destroyed as a result of the strikes, including nine S-300 and four Buk-M1 in the settlement of Danilovka, south of Kiev, the headquarters of the compound and a warehouse of rocket and artillery weapons in the settlement of Bakhmut in the Donetsk region, as well as a temporary deployment point of the nationalist battalion in the city of Lisichansk.

In general, overnight 60 military facilities of Ukraine were hit, including two command posts, two multiple rocket launchers, four ammunition depots, 47 areas of accumulation of weapons and military equipment of the Armed Forces of Ukraine. Russian air defense systems destroyed 2 Ukrainian unmanned aerial vehicles in the areas of the cities of Staraya Markovka and Kharkiv. According to the Russian Ministry of Defense.