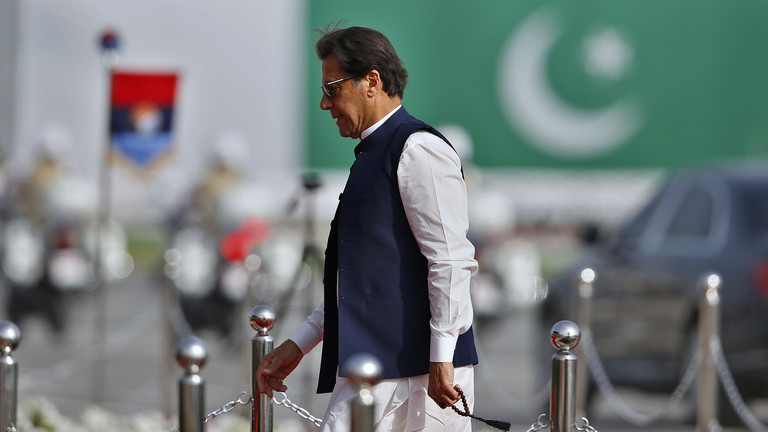 No country will be “respected” unless it “stands on its own two feet,” Imran Khan said

Pakistani Prime Minister Imran Khan has complimented regional rival India for maintaining an “independent foreign policy” amid US and allied pressure to adopt a harsher stance toward Russia.

Speaking Friday after accusing Washington of “interference” in Pakistan’s internal affairs, Khan went on to praise New Delhi’s unwillingness to go along with a barrage of sanctions and economic restrictions against Moscow.

“They protect their independent foreign policy which is centered on its people,” he said, as cited by local media.

Facing a no-confidence vote on Sunday after losing his parliamentary majority following multiple defections from his party, Khan’s remark was quickly denounced by political opponents, with the leader of the opposition National Assembly, Shehbaz Sharif, blasting him for talking up the policy approach of Pakistan’s top adversary.

“His recurring praise for [Indian Prime Minister] Narendra Modi’s foreign policy is an insult to the sacrifices of valiant Kashmiris braving Hindutva,” he tweeted, referring to a Muslim-majority population in northern India and a form of Hindu nationalism. “Among other things, the damage done to our foreign policy is incalculable,” Sharif added.

Khan, however, quickly shot back, saying that his rivals believe his “statements will anger America” and that “Pakistan cannot survive without its support.”

“They [the United States] order us. They say that if the no-confidence motion does not become successful, there will be consequences for Pakistan,” the PM went on, arguing that his administration will not join the “bloc politics to achieve the same objectives” against Russia.

The Pakistani leader previously said a “foreign country” was seeking to remove him from office and is driving the no-confidence vote, openly naming that nation as “America,” ostensibly by accident, during a televised address on Thursday. The government also summoned the acting US envoy in Islamabad over the alleged political meddling on Friday, which it denounced as “blatant interference.”

Khan previously praised India’s “independent” policy in late March, stating that his own country, like New Delhi, would not “bow” to Western pressure to join the sanctions spree against Moscow. Despite international pressure and criticism for staying neutral, India adopted a pragmatic approach and continued purchasing Russian oil, even at a discount, to ensure the country’s own energy security.