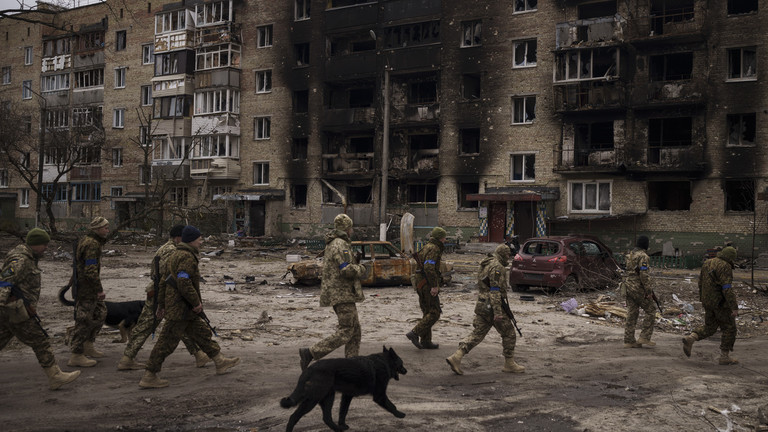 Ukraine to use POWs for false flag op – Russia

The Russian Defense Ministry claimed on Saturday that Ukraine will use the bodies of captured Russian soldiers to manipulate Western reporters in Irpin, a town near Kiev. Ukraine previously accused Moscow of killing hundreds of civilians in the area around the capital, which Russia denies.

Konashenkov claimed that Security Service of Ukraine (SBU) officials are planning to take the bodies of people who “died from Ukrainian artillery” from a morgue to the basement of one of the buildings on the eastern outskirts of Irpin.

“The SBU will then stage the ‘neutralization’ of a ‘Russian reconnaissance unit’ at the Pushcha-Vodytsia forest, which will [according to Kiev] arrive in Irpin to ‘kill the witnesses of Russia’s war crimes.’”

The spokesman claimed that the Ukrainian forces will present the “bodies of captured Russian soldiers, who had been tortured and killed by nationalists” as “evidence” to the Western media.

Ukraine earlier accused Russian troops of killing more than 400 civilians in Bucha, also near the capital. EU officials and foreign reporters were shown what Kiev said were mass graves and bodies of people shot execution style. Moscow has denied any involvement in the deaths, insisting that the killings happened after its forces retreated from the area late last month.

Earlier, Moscow launched an investigation after several videos emerged online, purportedly showing Ukrainian fighters torturing and executing Russian soldiers. Kiev claimed the videos were staged and said that its soldiers do not violate the rules of war.

Moscow attacked the neighboring state in late February, following Ukraine’s failure to implement the terms of the Minsk agreements signed in 2014, and Russia’s eventual recognition of the Donbass republics of Donetsk and Lugansk.

The German and French brokered Minsk Protocol was designed to give the breakaway regions special status within the Ukrainian state.