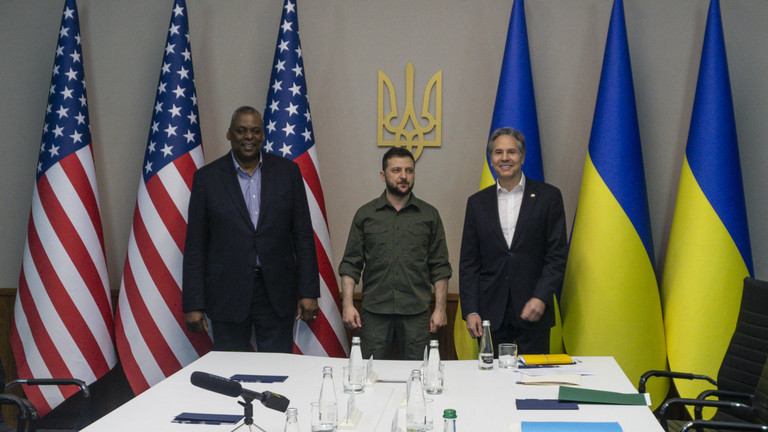 US Secretary of State Antony Blinken and Secretary of Defense Lloyd Austin made an unannounced visit to Ukraine on Sunday, where they promised additional military funding and diplomatic support to the country amid the Russian offensive.

News outlets said that, due to security concerns, reporters accompanying Washington’s top diplomat and defense chief were barred from reporting on the trip until the officials left Ukraine.

President Volodymyr Zelensky announced the visit during a press conference on Saturday, but the US publicly confirmed that it had happened only on Monday.

The strategy that we’ve put in place, massive support for Ukraine, massive pressure against Russia, solidarity with more than 30 countries engaged in these efforts, is having real results.

Austin said that the US has “the mindset” to help Ukraine win the fight against Russia.

“It will provide support for capabilities Ukraine needs, especially the fight in the Donbass,” a US official was quoted by Reuters as saying.

The media quoted a State Department official as saying that US diplomats will return to the of city Lviv in western Ukraine as the first step to reopen the embassy in Kiev “as soon as possible.”

The US and its NATO allies are supplying Ukraine weapons, ranging from anti-tank and anti-aircraft missile systems to armored vehicles and howitzers. They also imposed economic sanctions on Moscow.

Russia attacked Ukraine late February, following Kiev’s failure to implement the terms of the Minsk agreements, first signed in 2014, and Moscow’s eventual recognition of the Donbass republics of Donetsk and Lugansk. The German and French brokered protocols were designed to give the breakaway regions special status within the Ukrainian state.