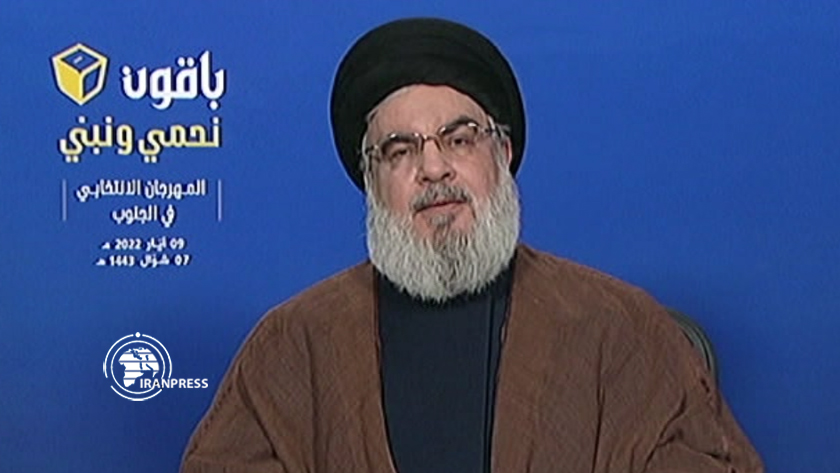 “Those who claim that Israel only attacked Lebanon in retaliation to attacks from Lebanon on them are liars! The suffering of the people of the South began from the very first days of the Zionist occupation!,” Sayyed Hassan Nasrallah said on Monday.

Speaking at the Tyre and Nabatiye election campaign ceremony, Hezbollah Secretary-General Hassan Nasrallah said: “The people of the South resorted to Resistance as a result of the Lebanese state’s abandonment of the South. I say to those who call for the disarmament of the Resistance, do not even dream of disarming the Resistance!”

“They wanted to distinguish the Shias of the Resistance, and they resorted to spreading lies and misinformation, especially against the leaderships and scholars, Imam Sayyed Musa Sadr, Ayatollah Sayyed Mohammad Hussein Fadlallah, and Imam Sheikh Mohamad Mahdi Chamseddine,” he added.

He further referred to Israel’s crimes against the Lebanese people and the supporters of Israel in Lebanon and said: “Those people are speaking in such a lowly manner. There is one particular party that is the most vocal on this. He claims that Israel did not even attack Lebanon, and thus there is no need for the weapons of the Resistance!”

“Israel conducted massacres and killed tens and tens of men, women, and children in the villages in the South along the bordering line! This was between 1948 and 1968 when he claims there were no attacks! He is either ignorant or purposely turning a blind eye!,” the Secretary-General noted.

“No one has spoken or set the tone as high as Imam Sayyed Musa Sadr, not the Amal Resistance, not the Hezbollah Resistance, no one! He truly is the first founder of the Resistance who set the founding stones of it from the moment he came to Lebanon until his kidnapping,” he highlighted.

“Imam Musa Sadr would say that owning weapons for Resistance is an obligation! He would say: “Sell your furniture and buy weapons!” He insisted and stressed the necessity of eradicating Israel from existence,” noted Nasrallah.

“Imam Musa Sadr moved from one Arab capital to another. I spent ten years asking the state to defend the South, but they would not listen to me. He asked them if they did not have enough soldiers. He’d tell them: “Come, I am the scholar who will help you!,” Nasrallah added.

“The Lebanese army is a brave army, but the politics are what do not allow them to take a definitive decision. O, Lebanese people, the state has been studying its defense plan against Israel since 1975!,” Nasrallah underscored.