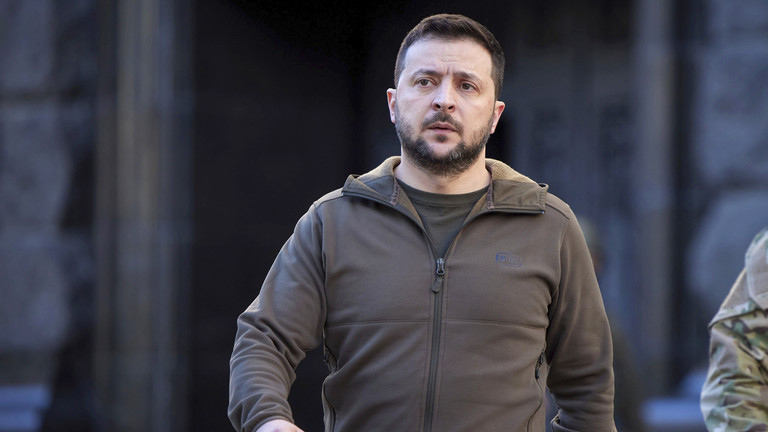 Volodymyr Zelensky arrives for a meeting with US Speaker of the House Nancy Pelosi in Kiev, Ukraine, April 30, 2022 © AP / Ukrainian Presidential Press Office

As Russia celebrated the defeat of fascism in WWII, President Zelensky of Ukraine shared an image of a soldier wearing an SS patch

Ukrainian President Volodymyr Zelensky marked World War II Victory Day by sharing an image of a Ukrainian soldier wearing the ‘death’s head’ patch of an elite Nazi Waffen SS unit. While the picture was soon deleted from his social media, the Ministry of Defense in Kiev also posted the photo.

The offending item was placed on Instagram and Telegram by Zelensky, on Monday. In it, a soldier next to an artillery gun wears the ‘death’s head,’ or “totenkopf” insignia of the 3rd SS Panzer Division, a unit of elite Nazi soldiers infamous for committing numerous war crimes and massacres of French civilians and Polish Jews. Zelensky himself is of Jewish heritage.

While the photo was soon removed, it was also posted to Twitter by Ukraine’s Ministry of Defense, under a quote by Zelensky acknowledging May 9 as the “Day of Victory over Nazism.”

In a speech commemorating Victory Day, which marks the defeat of Nazi Germany by the Soviet Union, Zelensky on Sunday accused Russia of imposing “a bloody reconstruction of Nazism” upon Ukraine.

In Moscow, however, Russian President Vladimir Putin slammed the US and its NATO allies for supporting “Nazis” in Ukraine, and described the military operation there as a “pre-emptive strike at the aggression.”

Ukraine is the only country in the world that has integrated openly neo-Nazi militias into its national military, and while these militias were once described by Western media as “neo-Nazi,” they are now referred to as “far-right groups.” Since Russian troops entered Ukraine in February, stashes of Nazi paraphernalia have been found in the houses and bases of these militia members, and social media accounts run by the Ukrainian government have posted similar images of soldiers wearing Nazi and far-right symbols.