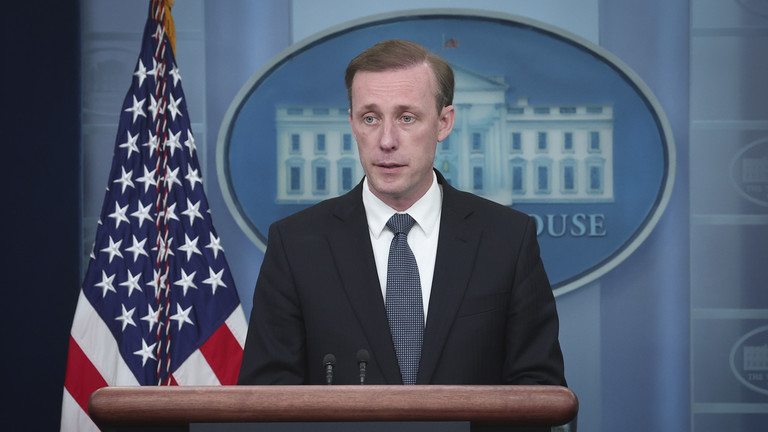 Washington has followed the EU by announcing it would upgrade trade ties with Taipei, a move that has angered Beijing

Washington is seeking to deepen its economic cooperation with Taiwan, US National Security Advisor Jake Sullivan has told journalists.

Speaking en route to Japan on board Air Force One on Sunday, Sullivan said the US was “looking to deepen our economic partnership with Taiwan including on high technology issues, including on semiconductors and supply chains.”

He noted that America did “not want to see unilateral changes to the status quo,” nor “military aggression.” Sullivan added that Washington expects its “allies and partners, both in the region and beyond,” to amplify that message.

The national security adviser is heading to Japan with President Joe Biden to take part in a summit of the Quadrilateral Security Dialogue group, also known as the Quad, which comprises the US, Japan, India and Australia. According to Reuters, the leaders of the four nations will discuss, among other things, issues of regional security.

Sullivan’s remarks came shortly after EU Trade Commissioner Valdis Dombrovskis told the European Parliament earlier this month that the bloc was planning to launch a “modernized” trade and investment dialogue with Taiwan on June 2.

The plans, which were first reported by the South China Morning Post in November, are nothing new. However, the level of cooperation has apparently been upgraded since then, with EU Director-General for Trade Sabine Weyand and Taiwanese minister for Economic Affairs Wang Mei-hua expected to lead the talks, according to the paper.

The news outlet claimed that the plans for establishing closer ties between the EU and Taiwan had been shot down last year by European Commission President Ursula von der Leyen over fears that this could worsen the bloc’s relations with mainland China.

However, according to the report, Brussels has since changed tack, with Dombrovskis announcing recently that the EU wants to “develop our trade and investment partnership with Taiwan in areas where our interests intersect.”

The European official highlighted Taiwan’s “role as a hi-tech leader,” with the South China Morning Post inferring from that remark that Brussels was banking on Taipei’s semiconductor industry to prop up its own ambitious European Chips Act, which was unveiled by von der Leyen in February.

Taiwan’s envoy to the EU, Ming-yen Tsai, welcomed Dombrovskis’ announcement, while a spokesperson for China’s mission to the EU called on Brussels “not to gamble on this issue, abide by the One China principle, earnestly respect China’s sovereignty and honor its political commitments with concrete actions.”

Beijing’s representative added that China opposed “any form of official interactions or any discussion and signing of an agreement with implications of sovereignty and of an official nature between countries or organizations and the Taiwan region,” describing the issue as one concerning the “political foundation of China-EU relations.”

Taiwan is a self-governing territory, which has been de facto ruled by its own government since 1949, when the losing side in the Chinese civil war fled to the island and set up its own administration there. China considers the Taiwanese authorities to be separatists, insisting that the island is an inalienable part of China.

In recent years, Beijing has intensified its military activities in the Taiwan Strait, separating mainland China from the island. Top Chinese officials, including President Xi Jinping, have openly said that the use of force is one of the options on the table to ensure the ‘reunification’ of Taiwan with the People’s Republic of China.

Under the so-called ‘One China’ principle, the vast majority of countries refrain from officially recognizing Taiwan’s independence.

Taiwan has, however, for years enjoyed extensive diplomatic and military support from the US, which maintains unofficial relations with the island. Washington has repeatedly warned Beijing of severe consequences if it attempts to take over Taiwan by force.