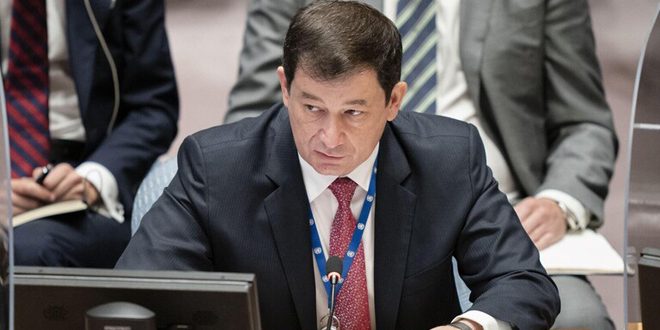 Russia’s first Deputy Permanent Representative to the United Nations, Dmitry Polyansky, has affirmed that the US is held responsible for the crisis of food and fuel in Syria.

“Information about the food and fuel crisis in Syria, for which the United States bears responsibility raises more concern given the sanctions imposed by Washington and the occupation of the northeast of the country,” RT Website quoted Polyansky as saying during a session of UN security council.

Polyansky went on saying that the statements by Washington and many other capitals that the unilateral sanctions are complying with its international commitments, and the allegations about their precise nature are not only false and unconvincing, but also show the inhumane attitude towards the civilians in Syria.

Regarding the repeated Israeli acts of aggression on the Syrian territory, the latest of which was on Damascus International Airport on June 10th, Polyansky stressed that these acts are unacceptable and cause dangerous repercussions that would threaten citizens’ lives and would escalate the situation in Syria and the whole region.

In another context, the Russian diplomat revealed that the weapons that Western countries are supplying to the Kyiv regime to fight Russian forces in Ukraine are increasingly appearing in Idleb, where they are being sold to terrorists there by corrupt Ukrainian officials.

He added that the black market for weapons in Europe has become as treasure not only for those officials, but also for the extremist terrorist organizations in the Middle East as a whole.