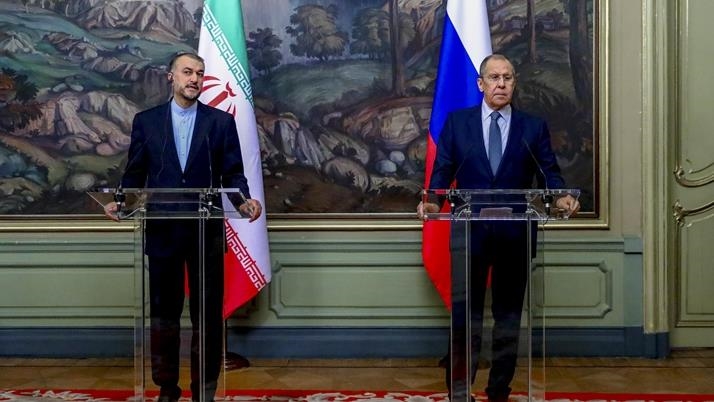 The US is putting obstacles in the process of the JCPOA revival, said Sergei Lavrov in response to a question from Iran Press on Thursday in his joint presser with Iran’s Foreign Minister, stressing his country’s support for Iran’s position towards the sanctions removal talks in Vienna “without any deductions or additions.”

Sergei Lavrov, who is on a two-day visit to Tehran at the invitation of Hossein Amir-Abdollahian, met with Iran’s President Ebrahim Raisi last night and held talks with the Iranian Foreign Minister.

The visit by the Russian Foreign Minister to Tehran is his first under the new Iranian administration.

Discussions on some international issues, including the Joint Comprehensive Plan of Action (JCPOA), the latest developments in Ukraine, Syria, Yemen, and Afghanistan, as well as economic cooperation between the two countries, are among the issues Sergei Lavrov and Amir-Abdollahian discussed.

Speaking to reporters, the Russian Foreign Minister also said that despite the sanctions, the trade volume with Iran rose by 80% to $4 billion, which is unprecedented.

He went on to say that cooperation between Iran and Russia is increasing despite sanctions and will have a positive trend this year, especially in the energy, agriculture and transportation sectors.

Lavrov said that Iran and Russia are cooperating on the Bushehr nuclear power plant project in the second and third phases and equipping it.

Russia’s top diplomat further explained that Tehran and Moscow will hold a meeting of the Joint Economic and Trade Commission in the future.

“Iran and Russia continue to support each other in all areas of politics and diplomacy,” said Lavrov.

He also stated that Iran and Russia will expand their cooperation in oil and gas exploration and technical and scientific cooperation.

“We should not allow the United States to change international principles and the UN Charter. All sanctions imposed by the United States on Iran are against this charter and we condemn it,” the Russian foreign minister noted.

“We welcome Iran’s entry into the Shanghai Cooperation Organization, and Iran, as a permanent member, will play an important role in strengthening this organization,” he added.

Pointing to the JCPOA, he said the United States has violated international law by withdrawing from JCPOA.

“JCPOA must be revived without deductions and additions, and we hope that Washington will make a rational choice.”

Iran and Russia will help implement joint projects in Syria, and this will be discussed at the Astana summit.

Referring to the Caspian Sea, Lavrov stated that the five countries of the Caspian region will have a meeting next week in Ashgabat.