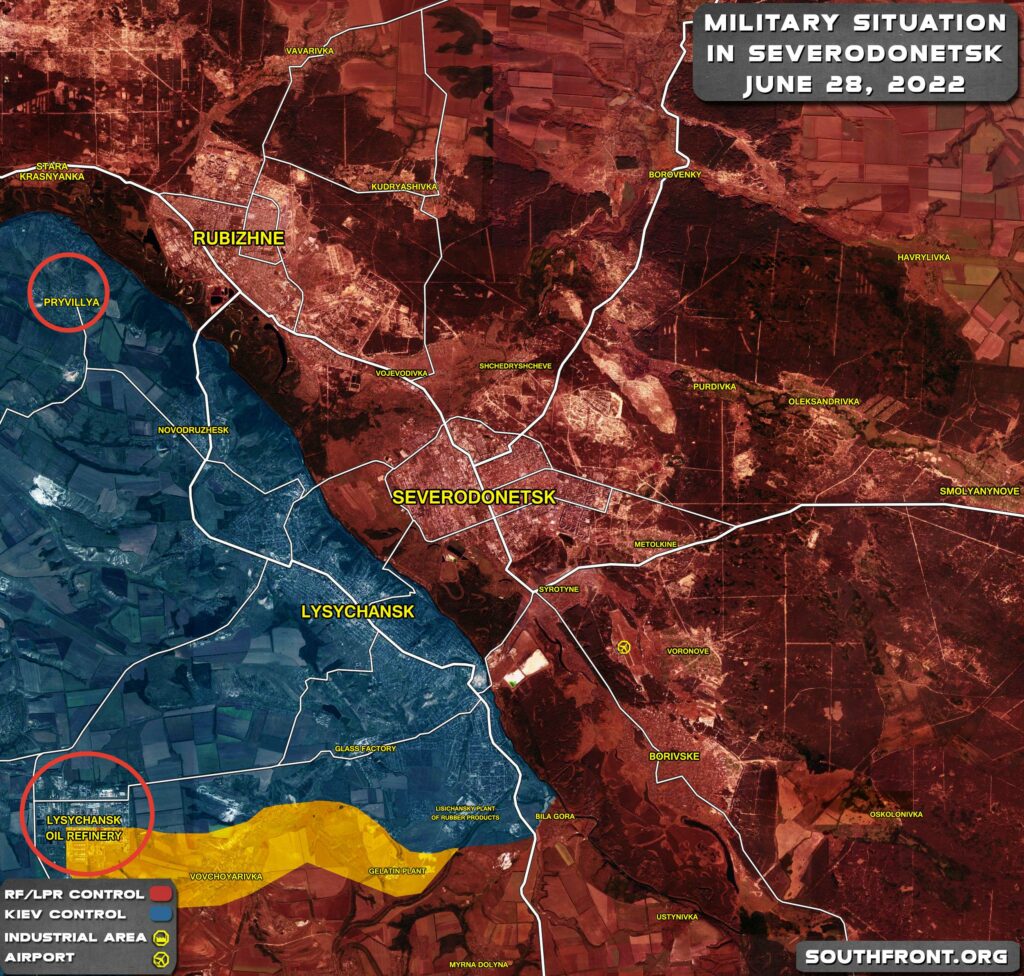 June 29th was marked by advances of joint forces of the Russian Federation, Luhansk and Donetsk People’s Republics in several directions  in the Luhangsk-Severodonetsk metropolitan area. According to various reports, about 1,500 Ukrainian fighters and foreign militants are currently deployed in the city of Lisichansk.

According to first reports from the front line, Russian-led forces took control of the town of Privolie in the Luhansk People’s Republic. The town is located on the north-western outskirts of the Severodonetsk-Lisichansk metropolitan area. Russian success was possible after the advancing units crossed the Seversky Donets River and established a foothold on the right bank on June 28th.

Russian control over the town of Privolie cut off another road of retreat for the Armed Forces of Ukraine (AFU) from Lisichansk to  Seversk.

The key goal of Russian-led troops is to take control of a larger town of Novodruzhevsk where the control point of the entire AFU grouping in the agglomeration is located, as well as the coordination center of the Foreign Legion.

Another advance of Russian-led forces was reported in the area of the Lisichansk Oil Refinery located to the west of the city. This was once of the main hubs, warehouses and supply base of the AFU in the area.

After several days of fighting, the facility reportedly came under Russian control on June 29th. The 108th Battalion of the Armed Forces of Ukraine was almost completely destroyed during the fighting at the Lisichansk oil refinery. According to the Russian Ministry of Defence, out of 350 people, only 30 survived.

Fighting has already reached the streets of the city of Lisichansk. Battles broke out in the southern and south-western parts of the city. Russian-led units are advancing from the town of Volcheyarovka along the Oktyabrskaya avenue and in the area of the village of the Matrosskaya mine along the Heroes of Stalingrad.

Some separate groups of the AFU attempt to flee from the besieged Lisichansk towards Seversk. The AFU military command transferred additional forces to the Seversk area, including the combat group of the 25th separate brigade from the Avdeevka front lines, which is aimed at preventing the advancing Russian forces from closing the trap.

In the area of Seversk, the AFU are reinforcing their defences preparing for the upcoming Russian advance after the loss of Lisichansk.

As a result of fierce fighting, the both sides are suffering heavy losses. According to the Russian Ministry of Defence, there is a critical food crisis in the units of the 115th Mechanized, 79th Airborne Assault and 25th Airborne Brigades of the Armed Forces of Ukraine operating in the Lysychansk direction. Due to hunger, numerous cases of abandonment of positions and desertion of military personnel are recorded.

Some Kiev’s fighters surrender, including foreign mercenaries deployed in the area.

On June 28th, LPR forces took hostage 10 foreign mercenaries near Lisichansk, the Ministry of Internal Affairs of the Republic reported. The foreign fighter are not granted with the status of prisoners of war.

Amid the advance of Russian-led forces in the Severodonetsk-Lisichansk metropolitan area, new cases of war crimes are recorded in newly taken areas.

Foreign journalist Patrick Lancaster reported the murder of a civilian man in the Lisichansk area by Ukrainian soldiers.

Being near Lisichansk on the “Lisichansk Cauldron”, where thousands of Ukrainian soldiers were allegedly surrounded by Russian and LPR forces, we found a number of small military positions near the bridge that Ukraine blew up to try to stop Russia’s advance.

In this area we also found the body of what turned out to be a civilian with three bullet holes in his head. There was a black plastic bag wrapped with sticky tape next to the man’s head. It should be noted that the forces of Russia and the LPR took control of this area only 2 days ago, and the corpse clearly decomposed for several weeks, if not months.

Taking into account all the evidence that we saw there and documented in this report, the logical conclusion is that the Ukrainian forces arrested a civilian for an unknown reason, then put a bag on his head and shot him 3 times in the upper part of the head.

I call on all government officials and journalists to conduct a full investigation into this apparent war crime committed by Ukrainian troops.

Another case of murder of civilians was reported in the industrial area. Bodies of civilians killed by Ukrainian neo-Nazis were found on the outskirts of Lisichansk. Their bodies were thrown into storage tanks for petroleum products. The bodies with their hands tied behind their backs are in civilian clothes. Apparently, there was a neo-Nazi checkpoint nearby, and this is the way they treated civilians.