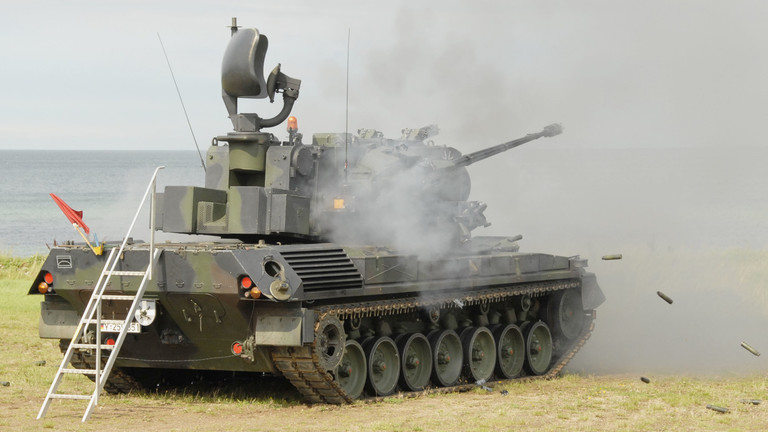 ‘Gepard’ anti-aircraft systems and ammunition have been delivered to Ukraine, the country’s defense minister says

Ukraine has received its first shipment of German ‘Gepard’ anti-aircraft systems, as well as thousands of rounds of suitable ammunition, according to a statement made by Defense Minister Aleksey Reznikov on Monday.

“We are waiting for the first 15 Gepards. Three have arrived in Ukraine today. They are already at the disposal of the Armed Forces of Ukraine,” Reznikov said on national television. “These are anti-aircraft systems, for which tens of thousands of rounds of ammunition have been transferred to us.”

Germany had previously promised to deliver at least 30 ‘Gepard’ air-defense tanks to Ukraine. The first shipment of 15 tanks is expected to have arrived before the end of this month, while another 15 are to be delivered in August.

Monday’s delivery marks the second time Germany has handed over heavy weapons to Ukraine after it transferred seven Panzerhaubitze (PzH) 2000 self-propelled armored howitzers along with other military hardware back in mid-June.

So far, Berlin has supplied the Ukrainian Armed Forces with 3,000 Panzerfaust 3 man-portable anti-tank rocket launchers, 14,900 anti-tank mines, 500 US-designed Stingers, and 2,700 Soviet-designed Strela man-portable anti-aircraft missiles. On top of that, 100 MG3 machine guns, 50 bunker-busting rockets for launchers, 21.8 million rounds of ammunition for light weapons, and 100,000 hand grenades have also been delivered, among other items.

Despite Berlin consistently providing Kiev with assorted weaponry since the beginning of Russia’s military operation in February, however, some Ukrainian officials have continued to criticize the German government for lagging behind the US and the UK in terms of arms deliveries.

Meanwhile, German Defense Minister Christine Lambrecht has insisted that Berlin can’t “give away much more,” and that it would not send Kiev weapons at the expense of its own defense capabilities.

Russia has repeatedly warned the West against sending weapons to Kiev, saying this would only prolong the conflict, increase the number of casualties, and result in long-term consequences.

Moscow sent troops into Ukraine on February 24, citing Kiev’s failure to implement the Minsk agreements, designed to give the regions of Donetsk and Lugansk special status within the Ukrainian state. The protocols, brokered by Germany and France, were first signed in 2014. Former Ukrainian president Pyotr Poroshenko has since admitted that Kiev’s main goal was to use the ceasefire to buy time and “create powerful armed forces.”