Home Politics Kiev assassinated dozens of its own Azov heroes (18+) 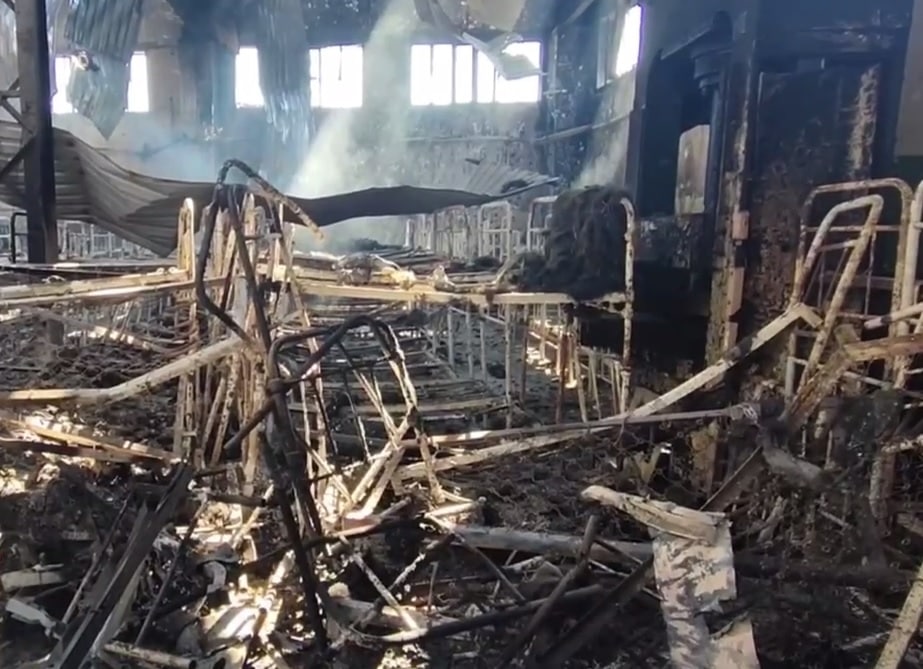 In the early morning of July 29, Kiev’s forces shelled a detention center for Ukrainian prisoners of war (POWs) in the village of Elenovka in the Donetsk People’s Republic. The blow was struck precisely at the barracks in which the captured soldiers of the Ukrainian Nazi Azov regiment were held.

The Russian Ministry of Defence confirmed the attack. According to the Russia’s Defense Ministry and local authorities, Ukrainian troops used US-supplied HIMARS multiple rocket launchers to strike the detention center.

Initially, the Russian Ministry of Defense reported that 40 Ukrainian POWs were killed and 75 others were injured. Later, the DPR territorial defense headquarters reported that the death toll in the missile strike has grown to 53.  DPR forces continue clear the debris, so the number of casualties may grow. Eight employees of the detention center received injuries of varying severity.

The attack was carried out at about two o’clock in the morning. The targets were barracks, where only militants from Azov were held. The target was successfully hit, which means that the reconnaissance and determination of the target were carried out in advance.

Fragments of shells for HIMARS found on the spot:

The Russian Ministry of Defence claimed that “the blatant provocation was committed with the aim of intimidating Ukrainian servicemen and preventing their surrender.” A large number of Ukrainian servicemen voluntarily lay down their weapons, as they know about the humane attitude towards prisoners of war by the Russian side.

Another reason for killing of dozens of Ukrainian fighters was that after months of silence, Azov fighters started to testify on war crimes ordered by the Kiev regime and committed by Ukrainian Nazis and servicemen of the Armed Forces of Ukraine, including against Russian POWs and civilians.

“The shelling of the pre-trial detention center in Elenovka began because the captured “Azov” began to speak,” said Head of the DPR Denis Pushilin.

The number of interviews with prisoners from the Azov regiment shared by the DPR authorities has recently increased. Ukrainian Nazis were not talkative. They were sure that the Kiev regime would soon exchange them as they were glorified as heroes during the siege of the Azovstal plant. In recent weeks they likely lost their hope. More and more members of the Azov regiment confirmed the war crimes committed by “Ukrainian heroes”.

For example, during the last week, the following interviews were shared online:

Pilyavsky Andrey Evgenievich, born on April 22, 1973, sergeant of military unit 3057 of the Azov regiment, described how they killed civilians in Mariupol.

Ukrainian POW from the Nazi battalion Azov, Dmitry Kozatsky who had a call-sign Orest, was one of those who were responsible for the press department of the regiment. He was granted with international awards for his photos from Azovstal. He confirmed that the order to murder Russian POWs was given directly by President Zelinsky’s office.

The Azov militants talked a lot about their crimes against civilians, extrajudicial executions, torture and confirmed that the country’s top leadership was involved in terror against civilians.

Kiev’s strike on its own is both an attempt to close their mouths forever and to intimidate those who survived. After the Kiev regime confirmed that it is ready to kill its own “heroes”, the remaining Ukrainian Nazis are likely to testify on the real essence of their command and provide more testimonies on the war crimes of the Ukrainian military.

The Kiev regime traditionally launched a media campaign in an attempt to hide the truth. They expectedly stated that the attack was carried out by the Russians. At the same time, various versions immediately appeared, one more absurd than the other.

Ukrainian media citing anonymous Ukrainian authorities report that the prisoners were transferred to Elenovka a few days before the attack. The fact of the detention of Ukrainian prisoners in Elenovka was well-known. The Azov fighters have been held in Elenovka for months, since their surrender in the Azovstal plant. It was publicly declared by the DPR and Russian military officials. This was confirmed by numerous video reports filmed in this center, showing Azov fighters.

The alleged Russian strike was explained with various reasons, including the attempts of the DPR military to hide tortures and crimes against Ukrainian POWs. However, numerous testimonies of the POWs confirm that they were in good health conditions and were treated well.

The video showing the HIMARS shells on the spot leave no space for any speculation by the Kiev’s side.

The value of the captured Azov fighters for the Russian and DPR side is extremely high, because earlier Ukrainian propaganda had created the image of heroes for them. Any developments with prisoners were in favor of Russia and caused significant information and psychological damage to Kiev.

The cooperation of the Azov members with the authorities in the DPR reveal the criminal orders of their commanders and Kiev authorities, including their crimes against civilians. Prisoners who refused to cooperate with the investigation were of interest to the Russians as an exchange fund for the rescue of high-ranking Russian and DPR officers or other valuable prisoners of war. In the third scenario, the Azov fighters would have been sentenced on the territory of the DPR, which would have shown Kiev’s inability to fulfill its loud promises to liberate the “heroes of Mariupol”.

Thus, Kiev had a weighty motive to solve the problem in the simplest way, to kill dozens of its own “heroes”.

However, hundreds of other Azov fighters remained alive. A repeated attack by Kiev on the place of their detention will only embitter the remaining Ukrainian prisoners. POWs will have no other way but to intensify cooperation with local authorities in order to increase their value to the Russians, who can save them from the Ukrainian shells.