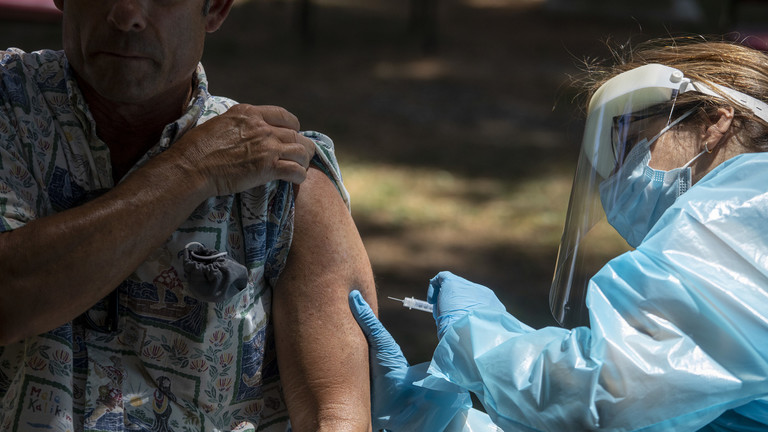 Man diagnosed with HIV, Covid-19, and monkeypox all at once – report

According to the Journal of Infection, this is the first known case in which the three viral diseases concurred in one individual

An Italian man has been diagnosed with HIV, Covid-19, and monkeypox simultaneously – the first known case of the concurrence of these three viral diseases, the Journal of Infection has reported.

According to an article published by the medical outlet last Friday, the 36-year-old male spent five days in Spain in June this year, developing a fever accompanied by a sore throat, fatigue, and a headache nine days later. A subsequent test yielded a positive result for Covid-19. To make matters worse, a rash appeared on the patient’s left arm soon thereafter, with small, painful vesicles spreading across the man’s body in the following days.

The man sought medical help and was hospitalized in an infectious diseases unit. The patient told doctors that he had had “condomless intercourse with men” during his sojourn in Spain.

Taking into account the appearance of pustules indicative of monkeypox, samples of the liquid contained in the vesicles were sent to be tested for the virus and came back positive as well.

Subsequent tests were carried out to check if the individual was infected with viral hepatitis, herpes simplex, gonorrhea, chlamydia, and lymphogranuloma venereum. None of these sexually transmitted diseases were identified. However, an HIV-1 test did come back positive.

Despite the combination of the dangerous diseases, the treatment administered by Italian doctors saw the patient recover relatively quickly, with visible signs of monkeypox disappearing almost completely within ten days.

The doctors noted that, given the scarcity of evidence, it is hard to tell at this point if this combination of viruses necessarily aggravates a patient’s condition.

The article points out that, given the rapid spread of monkeypox and the continuing Covid-19 pandemic, doctors worldwide should be aware of how the symptoms of these two diseases can overlap and co-exist. The authors also stressed that medical professionals should take note of a patient’s “sexual habits” and travel history. If someone tests positive for monkeypox, a complete screening for other sexually transmitted infections is recommended, the piece concludes.