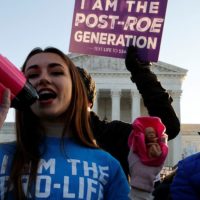 Elections are all about narratives. Before election day, a narrative is set by the national media that informs how the parties will decide to spend their cash. The media’s narrative, and the subsequent political spending, has a tremendous influence on who wins and who loses. This election, Democrats bet everything on abortion, making it the narrative-setting issue of their campaigns across the country. Democrats and the abortion industry spent $400 million dollars promoting their lies and anti-human agenda.

Yet, that singular focus and unprecedented expenditures were not enough for Democrats to achieve a clean victory. That’s because Democrats were spending all their time and money selling something the American people do not want: abortion at any time in pregnancy, performed for any reason, at the taxpayer’s expense.

There was a lot for pro-lifers to celebrate following election day. Strong pro-life governors who have passed significant protections for the preborn were overwhelmingly re-elected. Pro-life Republicans will continue to control the state legislatures in a majority of states. And it seems highly likely that pro-life leaders will be in control of the U.S. House of Representatives come January, ensuring the worst excesses of the Biden administration’s hostile stance toward preborn Americans will be curbed, and the administration can be properly investigated and held accountable. However, there were also major setbacks on election day.

Voters were asked questions on abortion and life in five states, and the pro-life side was defeated in each state. These states – California, Vermont, Michigan, Kentucky and Montana – show the need to redouble our efforts on education and persuasion on the intrinsic value of human life. We must combat the outright lies and misinformation told by the pro-abortion media.

In Montana, voters were told that voting in favor of the “Born Alive Infants Protection Act” would put medical providers in prison for allowing parents to hold a terminally ill newborn in her few brief moments of life outside the womb. This was a ridiculous lie (the provision instead assured that said newborn would not be abandoned and left to die), but the lie, extensively told and funded by out-of-state interest groups, worked.

In Kentucky, voters were told that voting in favor of a pro-life measure was voting in favor of government mandates and against freedom. These were effective messages regardless of their veracity, and if they are not being properly countered, voters may believe them.

The pro-life movement failed to adequately reach enough voters during the midterms. We have persuasive, mind-changing content, and we even have most Americans on our side when they know the truth, but without matching and exceeding the abortion industry’s reach and resources, we can’t get the votes we need to end abortion and build a culture of life. By saturating the market with the scientific truth about the humanity of a preborn child at all stages of gestation, the human right to life will be a winning political issue in 2024.

What the media does not want you to know is that the American people side more with the pro-life movement than with the abortion industry.  Specifically, most Americans support limits regarding abortion, and many hold conflicting opinions on the subject. But we know that as voters’ understanding of human development increases, their opposition to abortion does as well.

Data shows that 69% of American women [7 out of 10] believe that abortion should be significantly restricted yet legal — and even a majority of those who call themselves pro-choice (52%) “believe that abortion should be available, at most, during the first three months of pregnancy, allowed only in cases of rape, incest, or to save the life of the mother, or never permitted.” Contrast these prevalent beliefs in favor of abortion restrictions with the position of virtually all Democrat candidates and politicians, and the position of the Democratic Party: Abortion without any restriction, through all nine months of pregnancy, on-demand and tax-funded. Pro-choice strategists understand there is a wide expanse between the position of voters and Democrat politicians, and this is why they don’t want to talk about the facts of early human life and what abortion truly is.

The vast majority of Americans would rather taxpayer dollars support pregnancy centers than abortions, leading to a more family-focused culture.

The loudest message often wins. Tragically, pro-aborts were louder because they were richer.

The pro-life movement must maximize its resources to change the media landscape in America. That is the biggest takeaway from the midterms because there is solid data that illustrates how persuasive and compelling pro-life messages can be. We know that over 40% of people change their minds from pro-choice to pro-life after viewing the right content. This includes persuasive video content such as that which is posted on whatisabortion.com or videos like “Baby Olivia.” These videos, which share the truth about the beauty of human development in the womb and the brutality of abortion procedures, are narrative-shaping.

The pro-life movement needs to set the narrative, so we can win the narrative. The narrative is the truth that human life begins at the moment of fertilization, that abortion is a violent and unethical act of killing, and that children – regardless of their age – deserve complete legal protection.  We know that when people learn the truth about abortion and life in the womb, they become pro-life. It is our strategic duty, and our moral obligation, to give every American a true choice when they go to the ballot box. Every American needs to hear the pro-life message. Our future literally depends on it.