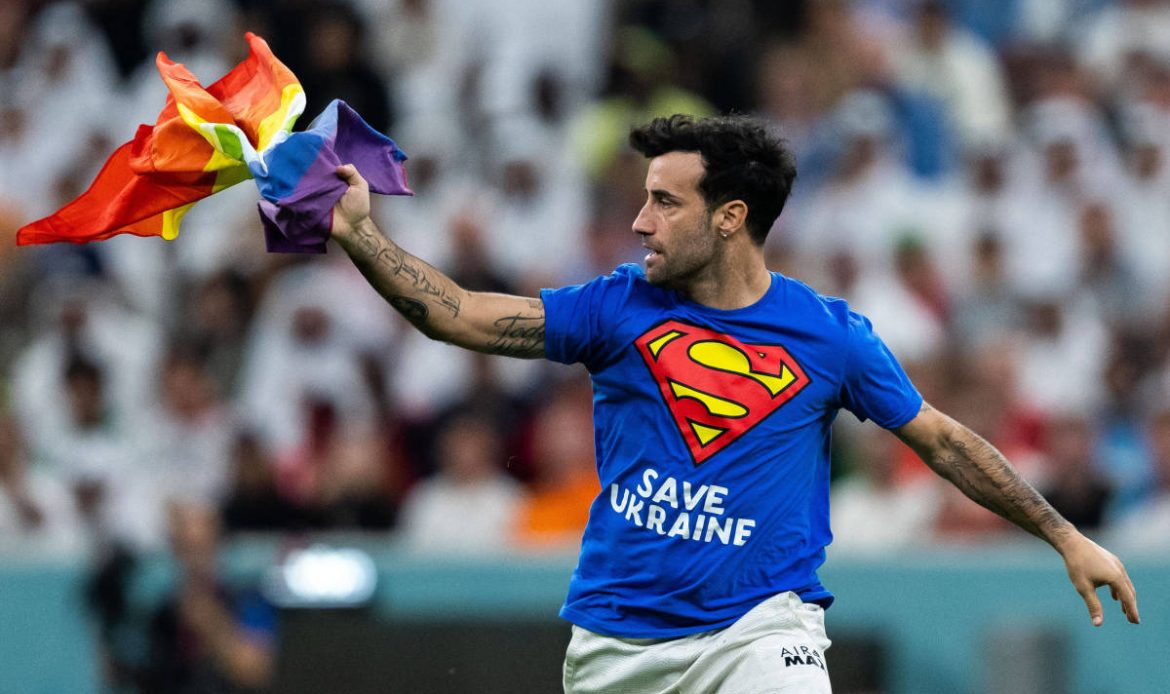 CNN — The World Cup match between Portugal and Uruguay was briefly interrupted by a pitch invader waving a rainbow flag on the field at the Lusail Iconic Stadium on Monday.The FIFA global television feed avoided showing the pitch invader, but the individual could be seen running on the field trailing the flag as they were pursued by security officials.

Portugal won the match 2-0 thanks to two Bruno Fernandes second-half goals, a victory that ensured the European team’s qualification for the knockout stages.

The incident involving the pitch invader happened in the 51st minute of the game. Iranian referee Alireza Faghani was later seen picking the flag up off the turf.

Getty photos showed the flag carrier wearing a shirt with the words “RESPECT FOR IRANIAN WOMAN” written on the back and “SAVE UKRAINE” writing on the front.

The pitch invader has since been identified as Italian Mario Ferri, who describes himself on his Instagram feed as “football player” and “modern pirate.”

In a series of posts of his Instagram story, Ferri called himself the “new Robin Hood,” outlining a meeting he had with FIFA President Gianni Infantino after being detained.

“I will call it ‘the last dance.’ My last run in a playground, I wanted to send important messages for me that I have experienced on my skin in the past months,” he wrote.

“1) A message for Iran where I have friends who are suffering, where women are not respected … THE WORLD MUST CHANGE, we can do it together with STRONG gestures that come from the heart, WITH COURAGE.

“2) FIFA banned rainbow captain’s armbands and human rights flags in the stands, they blocked everyone, BUT NOT ME, like a Robinhood 2.0 I brought the message of the PEOPLE. We want a free world that respects all races and all ideas.

“3) SAVE UKRAINE. I spent a month in the war in Kiev as a volunteer and saw how much those people are suffering.

Ferri added: “Breaking the rules if you do it for a good cause is NEVER A CRIME.”

In a statement sent to CNN from the Supreme Committee for Delivery & Legacy – which, since its formation in 2011, has been responsible for overseeing the infrastructure projects and planning for the World Cup – it said the pitch invader has been banned from attending any more matches.

“Following the pitch invasion that took place during last night’s Portugal v Uruguay match, we can confirm that the individual involved was released shortly after being removed from the pitch. His embassy has been informed,” it said.

“As a consequence of his actions, and as is standard practice, his Hayya Card has been cancelled and he has been banned from attending future matches at this tournament.”

A Hayya card acts as a Qatari visa and all World Cup ticketholders must apply for one as it is used to identify fans.

CNN has reached out to FIFA and the Qatar tournament organizers for more information on the incident.

The participation of Iran, who play the US Men’s National Team on Tuesday in a Group B match, in the World Cup has been played out against the backdrop of the country’s domestic turmoil.

Russia invaded Ukraine on February 24. In recent weeks, Russian forces have repeatedly targeted power infrastructure in Ukraine, leaving more than seven million people without power after one wave of strikes a week ago, according to Ukrainian officials.

Ukrainians remain resolute in the face of Russian missile attacks, however, and hopes for any kind of negotiated end to the war remain distant, even as America’s top general pushes for diplomacy.

Meanwhile the issue of LGBTQ+ rights in Qatar has also been a constant theme at the World Cup. The rainbow is a symbol of LGBTQ+ pride.

On Saturday, two German soccer fans told CNN that they were asked by security officials to remove the rainbow-colored items they were wearing as they made their way to watch the World Cup match between France and Denmark.

Wahl said he was released 25 minutes after being detained and received apologies from a FIFA representative and a senior member of the security team at the stadium.

When asked to clarify the dress code for fans, FIFA referred CNN to the tournament handbook, which states “expats and tourists are free to wear the clothing of their choice, as long as it is modest and respectful to the culture.”

After some Wales fans were also denied entry into stadiums for wearing rainbow-colored bucket hats, the Welsh Football Association said FIFA told the federation on Thursday that rainbow-colored flags and hats would be permitted at World Cup stadiums in Qatar.

Qatar’s LGBTQ+ laws – where sex between men is illegal and punishable by up to three years in prison in the country – has come under criticism.

A report from Human Rights Watch, published last month, documented cases as recently as September of Qatari security forces arbitrarily arresting LGBT people and subjecting them to “ill-treatment in detention.”

However, the country has insisted that “everyone is welcome” at the tournament, adding in a statement to CNN this month that “our track record has shown that we have warmly welcomed all people regardless of background.”

Yes, but then noCristiano Ronaldo thought he had scored Portugal’s first goal – but not according to FIFA’s officials.Midway through the second half, the 37-year-old rose to head a cross from Fernandes.Ronaldo seemed convinced he had got the slightest of touches to score his second goal in as many games at Qatar 2022 – and he certainly celebrated as if he did.However, Ronaldo was left disappointed after officials changed their minds, awarding the goal to Fernandes.Chasing an equalizer, Uruguay ratcheted up the pressure, in particular after the introduction of Luis Suárez and Maxi Gomez.Just minutes after coming on, Gomez struck the post with a curling effort while Suárez could only hit the side-netting from close range soon after.Portugal wrapped up its victory following the award of a controversial penalty by the video assistant referee for a handball by José María Giménez.Fernandes had two more opportunities to complete his hat-trick, but was denied by Uruguay goalkeeper Sergio Rochet and then the post thwarted the Manchester United midfielder.The victory means that Portugal has advanced to the next stage of the World Cup with a game to spare whereas Uruguay needs a victory from its final game against Ghana to have any hopes of progressing.Friday’s match between the South American side and African team will be the first meeting in the World Cup since their controversial quarterfinal in 2010, when Uruguay beat Ghana in a dramatic penalty shootout to reach the semifinals.Ghana were left to rue a missed penalty in the last minute of extra-time which denied them the honor of becoming the first African team to reach the semifinals.The penalty was awarded after Ghana’s Dominic Adiyiah had his first shot blocked on the line by Suarez and his follow up effort was kept out out by the Uruguayan striker’s hand.It meant a red card for Suarez, but Asamoah Gyan’s penalty hit the crossbar, ensuring the game went to a penalty shootout.