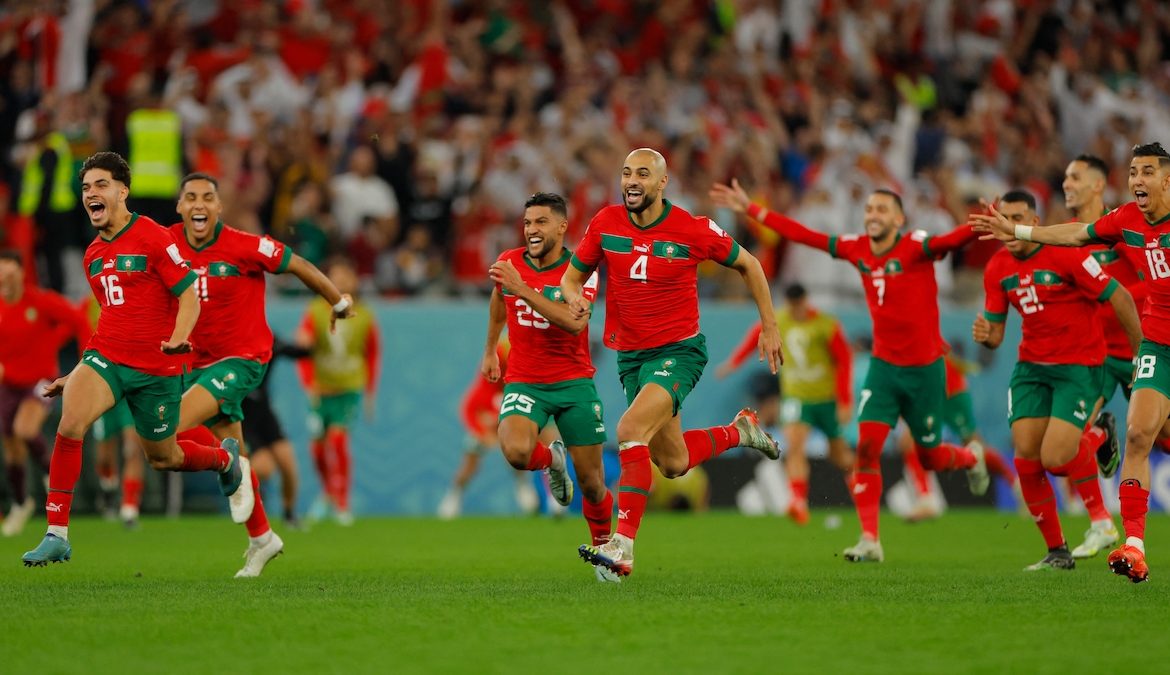 Morocco will play a World Cup quarterfinal for the first time after eliminating 2010 world champions Spain at Education City. And the so-called Atlas Lions are now one step from making history as the first African nation to reach the semifinals by beating either Portugal or Switzerland in Saturday’s last-eight tie.

Coach Walid Regragui’s team went into this game having conceded just one goal — an own goal — in the tournament and their defensive organisation was crucial in overcoming Luis Enrique’s team. Morocco rarely looked troubled by Spain, but their inability to score themselves during normal time and extra time meant that the game went to penalties.

And that’s where goalkeeper Yassine Bounou emerged as a national star by saving penalties from Sergio Busquets and Carlos Soler, as well as seeing Pablo Sarabia hit a post, as Spain suffered the ignominy of losing a penalty shootout without scoring a single one of their spot kicks. The defeat means Spain have now lost four of their five World Cup penalty shootouts.

For Morocco, though, the chance to go even further in this World Cup has now opened up. Whoever they face in the next round, they will not be overshadowed by their opponents and could yet progress all the way to a semifinal against either England or France. In the first World Cup to be staged in an Arab nation, Morocco’s progress ensures that the whole region still has a team to throw its support behind.

Spain have been an anomaly at Qatar 2022. Only England (12) have scored more goals than Spain, who went into the Morocco game having netted 10 times in the group stage, but despite their numbers, Luis Enrique’s team have virtually no goal threat against well-organised opponents.

The 7-0 win against Costa Rica in their opening game has skewed the picture with the 2010 World Cup winners because they tried everything against Morocco and never looked like scoring. Enrique started with Marco Asensio ahead of Alvaro Morata, but the Real Madrid forward offered little threat and was only able to hit the side netting with his one clear chance in the first half.

But Morata, when he came on just after the hour mark, was little better. He made more penetrating runs than Asensio, but his finishing and awareness meant he did nothing with the opportunities he created. Enrique was too slow in throwing Nico Williams and Ansu Fati into the action.

When they came on, the two forwards made a difference and enabled Spain to get behind the well-organised Morocco defence. They crashed out of this tournament because they had no cutting edge when it mattered.

If the World Cup final was decided by the best fans at Qatar 2022, we would all be looking ahead to a clash with between Argentina and Morocco at Lusail Stadium. You’ll have heard all about the Argentina fans — they have been magnificent in terms of their numbers, their songs and the way they have filled every stadium in a sea of blue and white. But the Morocco supporters have been similarly loud and passionate. This game brought out the best of them.

Deep-rooted historical and geographical tensions between Spain and Morocco added real spice to the atmosphere, but it was a display of incredible colour and noise by the Morocco fans that enabled their team to make the game so tough for Spain. But the Morocco support inside Education City went beyond mere backing for the Walid Regragui team. As the last African team in the competition, they were already carrying the hopes of a continent, but in the first World Cup staged in the Middle East, Morocco’s presence as a team from an Arab nation also matters.

Among the Morocco flags were many Palestinian flags, which have been prominent at every game involving a team from North Africa or the Middle East, and Morocco coach Regragui said before the game that his team knew they were representing more than their country.

“We come in with a winner’s attitude, we want to hoist our Moroccan flag,” he said. “And yes all Arabs and Africans. We want their prayers and their support. Before it was just the Moroccans, now we’re going to add the Africans and the Arabs.” That Morocco have made it into the quarterfinals is huge for this World Cup and the region.

What an amazing performance in the penalty shootout by the Morocco goalkeeper. Stunning saves against Sergio Busquets and Carlos Soler.

Chosen ahead of the in-form Alvaro Morata to lead Spain’s attack, Asensio had few chances, but he should have done much better with those he had.

After the match: What the players and managers said

Morocco player Bilal El Khannouss: “We have written Morocco’s history. Morocco had never qualified for the quarterfinals of the WC before. What an incredible day for us! We did it together. We have a great team. The head coach has created a great team spirit. We believed in us and in the fact we could beat them and we did it. We didn’t prepare for the penalty shootout yesterday. We didn’t practice.”

Morocco goalkeeper Yassine Bounou: “We felt the support of our fans, be it in Morocco or any other country in the world, this gives us the impetus to give such a performance. When you’re in the thick of it, you can’t really realize what you’ve achieved, we need to remain focused but as time goes on, maybe we’ll realize what we’ve just achieved.”

Spain’s Sergio Busquets: “It was hard for us. We tried to tire them out, to find spaces. Sometimes we managed it, and we lacked a bit of luck, the final ball or the finish. It’s always heads or tails [with penalties]. We missed the first three penalties and it’s very difficult like that.”

Spain coach Luis Enrique: “We have to congratulate the winners. They played their game, it turned out well, they were better than us in the penalty shootout. I think children have to learn how to lose, regardless of whether you deserve it or not.”

“Football is a marvellous, passionate sport, but a team can win without attacking. Morocco attacked once or twice and were dangerous, but we dominated the game completely, and tried to create. We would have liked to create more. It was hard for us. We had 11 shots I think but few on goal. In the final move of the game Pablo Sarabia hit the post. The penalty shootout was hard for us. But I’m proud of my players.”

This article was originally published by espn.