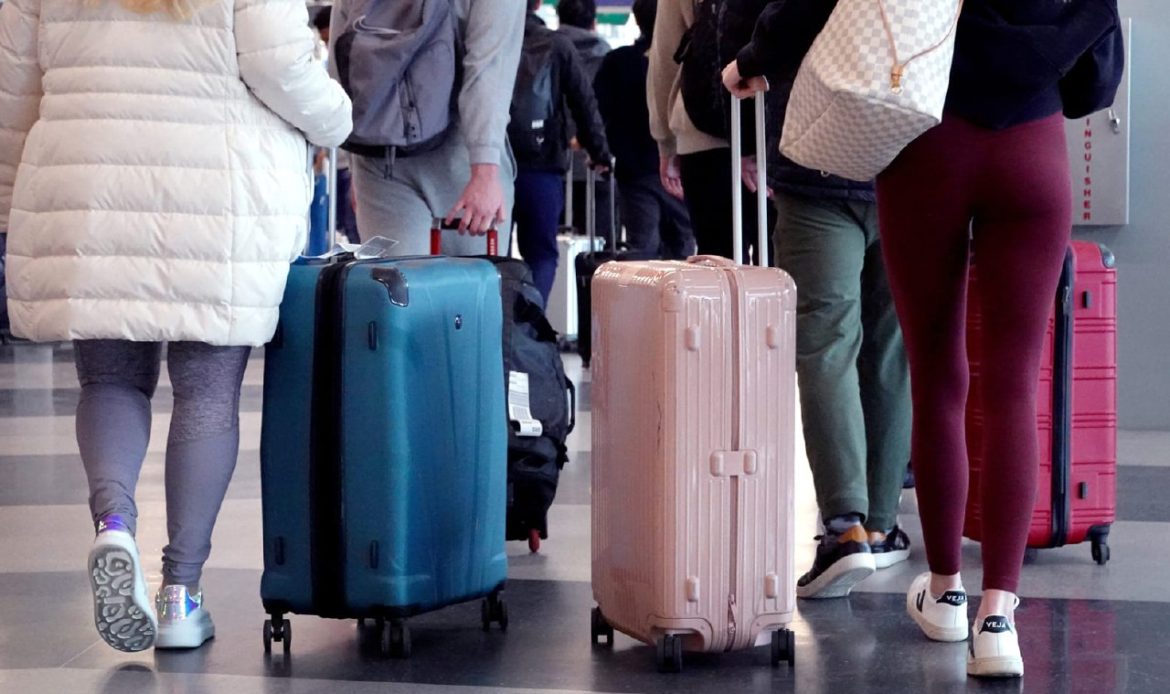 Luck might have finally run out’ for holiday air travelers.

(CNN) — Winter certainly is arriving with a bang in the United States. An arctic blast and bomb cyclone will push through most of the country as the season officially starts, and that’s bound to bring disruptions for millions of holiday travelers.
In fact, just over 1,000 Thursday flights within, into or out of the US had already been canceled by 7:50 p.m. ET Wednesday, according to data from flight tracking site FlightAware.
US air travelers had a decent run of it over the July Fourth, Labor Day and Thanksgiving holidays with largely favorable weather conditions. But it appears we’re in for a different story for Christmas.
That huge winter storm, what the National Weather Service is calling a “once in a generation type event,” is delivering deadly cold, possible blizzards and a proverbial lump of coal in our travel stockings. And it’s all coinciding with a travel season that’s returning to crowded, nearly pre-pandemic levels.
And when you factor in that airlines are operating fewer flights that are more crowded, there’s serious potential for a serious mess.
Travelers check in for their flights at Terminal 1 at Minneapolis-St. Paul International Airport in Minnesota on Wednesday.
Abbie Parr/AP
“We’re looking at major airports impacted by delays and cancellations including Denver, Chicago, Houston, possibly Atlanta, and later into the weekend, highly-trafficked New York area airports as weather systems move East,” said Kathleen Bangs, a former airline pilot and a spokesperson for FlightAware.
“But really, if things play out as the major weather forecasters are predicting, then hundreds of airports could be affected.”
Keep your eyes on the Midwest, particularly Chicago.
Airlines are already out front on offering waivers on fees to switch flights, allowing people to bypass trouble spots such as Chicago — and dozens of other potentially impacted cities — without financial penalty.
The sooner the better, said Keyes, who noted that flights are more packed than they were pre-pandemic in 2019, because although travel volume is still down, the airlines have trimmed the number of flights.
Keyes said December 22 and December 23 are typically the busiest travel days leading into Christmas. This year that’s Thursday and Friday. Unfortunately, Thursday is going to be the most difficult day for travel, according to the CNN Weather team.
Travelers walk through Terminal 3 at O’Hare International Airport in Chicago on Monday
Nam Y. Huh/AP
The bedeviling nature of winter storms
Massive winter storms create all kinds of issues: dangerous cold for travelers and workers, frozen precipitation and high winds. All play havoc with getting people safely to their destinations.
“And when it comes to ice, that’s where things grind to a halt,” Bangs said. “Most Northern-tier airports are geared up to handle snow, but there is no easy way to conquer widespread ice.”
Some of this is just out of our control.
“There’s no amount of safety protocol or preparation that airlines can take that’s going to make it safe to land or take off in the middle of a snowstorm,” Keyes said.
What can airline passengers do to avoid a fiasco?
• Take advantage of airlines’ travel waivers to leave earlier or reroute itineraries.
Bangs said if your flight gets canceled, consider flying on Christmas Eve or Christmas Day. While there are fewer flights, there are also fewer passengers.
“Scheduling the first flight of the day is a great way to avoid flight delays,” Jeff Klee, CEO of CheapAir.com, told CNN Travel in a recent email. “Studies show that the first flights of the day are more likely to leave on time and arrive on time.”
• Pack light. “The best way to ensure all luggage arrives safely to a traveler’s destination is to not check a bag. Packing light and carrying on is a great way to save money and have peace of mind that your luggage will make it to your destination with you,” Klee said.

Industry group Airlines for America said in a recent media briefing that the industry is adding around 4,600 employees a month. Airlines have ramped up hiring, reduced capacity and built in reserves and buffers to improve performance, the organization said.
What should I do if my flight has been canceled or delayed?
December 21, 2022 by Forrest Brown, CNN
“With hybrid work schedules, we are seeing more people take long weekends to travel because they can work remotely at their destination and be more flexible with the days they depart and return.”
Top image: Workers deice an Alaska Airlines plane at Seattle-Tacoma International Airport on Tuesday, December 20. Much of the rest of the United States will see severe weather in the coming days.

this article was originally published by CNN.

Airline Airlines Travel USA
Previous ArticleOpenAI Could Write This Article, But Only We Can Diversify Tech.
Next Article BBC Sports Personality winners: Who won the awards in 2022.