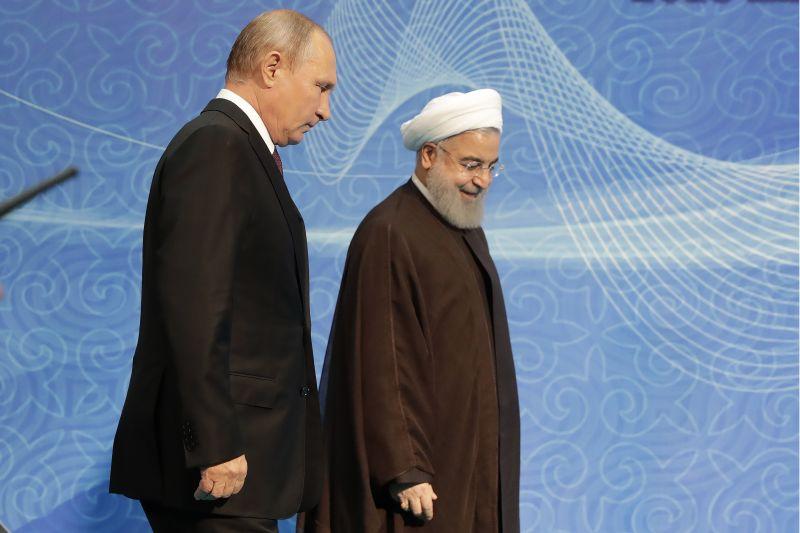 The withdrawal of the US from the international agreement on the Iranian nuclear program and introduction of new anti-nuclear sanctions are just the tip of the iceberg representing Washington’s far-reaching strategic goals in Eurasia and Central Asia.

The goal of the new restrictions introduced by the US against Tehran is destabilizing the country as a minimum and regime change as a maximum. It doesn’t really try to conceal this. However, Washington does not need a different, loyal or even friendly Tehran just for the sake of it. The goals are much broader and long-term: the US is prepared to pay any price to stall the rapprochement between Russia and China, as well as the current integration processes, including such large-scale projects like the North-South transit corridor or the One Belt, One Road.

Iran, which is a transit country for the main trade and passenger routes, has become a key player in these projects and – a crucial link in Russian-Chinese cooperation.

As soon as Iranian President Hassan Rouhani took office in 2013, he said that one of his government’s priorities would be the development of the country’s transport and logistics infrastructure to provide for the transit of goods and commodities from Europe and Central Asia to the southern ports of the Persian Gulf and on to South Asia and Africa and back, and also from East Asia to Mediterranean ports. Therefore, the Islamic Republic’s economic program was based on the search for alternatives to oil revenues. In the last few years, Iran’s participation in the North-South corridor, which connects the Indian Ocean and the Persian Gulf to the Caspian Sea via Iran and then to North Europe via the Caucasus and Russia, has been the center of Tehran’s economic diplomacy.

Iranian experts estimate that the country could get $1-2 billion a year from goods transit via this transport corridor, while each ton of cargo shipped by railway along this route will generate about $50 in transit revenues.

Yet another very big player on the continent – India – is also closely involved in the corridor project, offering the prospects of increasing its trade with its neighbors along the route by $28-170 billion. Compared to the traditional routes via the Suez Canal, used by India for trade with Russia and North Europe, the corridor reduces the distance by 40% and the cost of delivery by 30%. This is why New Delhi agreed to invest $500 million in the development of the infrastructure of Iran’s easternmost port Chabahar in the Strait of Hormuz.

To put it straight: Washington’s treacherous breach of its obligations under the nuclear deal known as the Joint Comprehensive Plan of Action (JCPOA) jeopardizes Iran’s plans to complete the infrastructure required for the proper functioning of the North-South international transport corridor. This means that Iran may once again find itself in economic and transport isolation.

Meanwhile, completion of the important part of the railway between Rasht and Astara along the border with Azerbaijan requires investment of $1 billion. Azerbaijan has agreed to provide $500 million, and now Iran needs to find the remaining half in order for the section to be commissioned in 2022.

The construction of another important section, a railway between Chabahar and Sarakhs, requires $2.5 billion.

US sanctions may create a deficit of financing both in Iran and its partner countries, India and Azerbaijan.

It also raises the issue of risks for businesses, since it involves financial cooperation with a subject of Washington’s sanctions.

Despite anti-Iranian restrictions, Russia carries on with electrification of the 500 km of railway from Garmsar to Incheh Borun srarted at the end of July. The railway goes along the northern part of Iran towards Turkmenistan and Kazakhstan and is part of the international transport corridor, connecting Central Asia with the Persian Gulf. The $1.2 billion project is financed with a loan provided by Russia.

Other big joint projects in Iran, including the construction of the next block at the Bushehr nuclear power plant, are also underway.

As for the Russian-Iranian trade, the parties have in advance gone over to partial settlements in national currencies, which eliminates the threat of transactions being blocked. Ali Akbar Velayati, the senior advisor to Iran’s Supreme Leader, visited Moscow in July and said that 30% of bilateral trade was already conducted using roubles and rials, while its turnover had grown by 36% in the first four months of 2018 compared to the same period of 2017.

Having made it clear that Russia would “do everything necessary to preserve and fully implement the JCPOA,” the Russian Foreign Ministry emphasized that it was “taking relevant measures to protect trade and economic cooperation with Iran at the national level.”

China, in its turn, remains the biggest buyer of Iranian oil. Beijing has already announced that, rather than reducing, it plans to increase imports after the second set of US sanctions, which ban the purchase, transportation and export insurance of Iranian oil, come into force on November 4.

According to Iranian media, Chinese oil company Sinopec may increase its stake in the consortium developing phase 11 of the world’s biggest gas field, South Pars, as the French giant Total is withdrawing from the project.

Analysts also believe that China has a good chance of replacing the French carmakers Peugeot and Renault, which have also left the Iranian market. Many compare today’s Chinese car industry with the Japanese and South Korean in the 1970s and 1980s. As many as 50% of car parts in the Iranian market today are from China. So the attempt to create a crisis in Iran’s second most important industry after oil and gas will most likely fail.

The Chinese Foreign Ministry has assured Iran that the countries would continue their cooperation in accordance with their obligations under international law. In a special statement related to the coming into force of the first set of anti-Iranian sanctions, the ministry emphasized that it consistently opposed unilateral sanctions and aggressive attempts to extend internal jurisdiction beyond national borders. The spokesperson for the Chinese Trade Ministry said in an interview with Islamic Republic News Agency, IRNA, that economic relations between Beijing and Tehran would be expanded, “regardless of internal regulations of third countries.”

Still, it seems that Washington will not give up its attempts to tear Iran away from Russia and China, since the stakes in this game are so high.