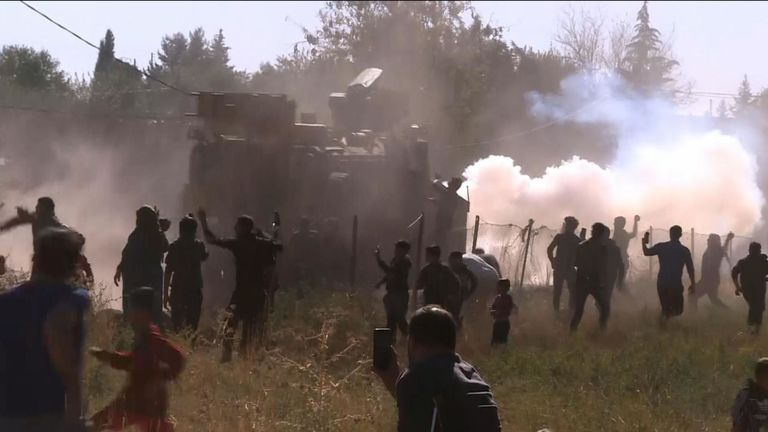 At least two civilians have lost their lives when Turkish military forces fired live rounds at a group of people, who were taking part in a protest against their presence in northern Syria following a cross-border incursion by Turkish army troops and their allied militants against members of the Kurdish People’s Protection Units (YPG).

The so-called Syrian Observatory for Human Rights reported that Turkish troops, conducting a joint patrol near the mainly Kurdish town of Kobani (officially known as Ayn al-Arab), opened fire at local residents on Tuesday afternoon as the latter threw stones and shoes at them in an expression of boiling rage.

The Britain-based war monitoring group said two people were killed and seven others injured in the process.

The development took place only two days after an unmanned aerial vehicle (UAV), operated by Turkish military forces, launched an airstrike against a residential neighborhood in Syria’s northeastern province of Hasakah.

Syria’s official news agency SANA reported that the drone fired a missile at al-Dardara village on the outskirts of the key border town of Ra’s al-Ayn.

There were no immediate reports about possible casualties, and the extent of damage caused.

A day earlier, Syrian government troops had retaken the village of Um Shuaifeh, located near the border with Turkey, from Turkish military forces and their allied militants following intense clashes.

SANA said the battles involved heavy and medium weapons, noting that Syrian army soldiers finally managed to liberate the village and establish full control over it.

They forced Turkish forces and their allies to retreat towards the village of Mahmudiya, Syria’s official news agency said, without providing any information about possible casualties.

A correspondent and two cameramen for the state-run al-Ikhbariyah Syria television news network, identified as Fadel Hammad, Walid Ibrahim and Mohammed al-Khaled respectively, were injured by tank shell shrapnel during the coverage of the clashes.

Also on Tuesday, Turkish troops and their allied militants lobbed barrages of shells at several villages in the western sector of Syria’s Hasakah province.

SANA reported that the projectiles struck areas in the villages of al-Qasimiya, al-Rashidyia, al-Rihaniya and al-Azizyia on the outskirts of Tal Tamr town, with no reports of casualties and the extent of damage caused immediately available.

Ankara views the US-backed YPG as a terrorist organization tied to the homegrown Kurdistan Workers’ Party (PKK), which has been seeking an autonomous Kurdish region in Turkey since 1984. The YPG constitutes the backbone of the Kurdish-dominated so-called Syrian Democratic Forces (SDF).