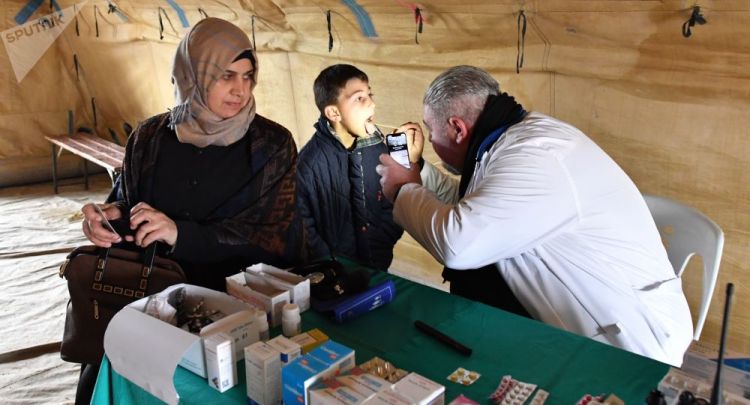 The first units of the medical special forces arrived at the Russian military police base near Kobane in northern Syria, where they will provide assistance to the local population.

Special forces medics arrived near Kobane on a Mi-8 helicopter along with equipment, medicines, dressing materials.

According to surgeon Sergey Ponomarev, local residents have not had adequate medical care for a long time.

“Chronic diseases are neglected, acute [diseases], respectively, too … We are ready to work here all the way … After some time, the full medical team will arrive. I think we will be able to take about 100 people a day”, Ponomarev told reporters.

The first medical aid point was deployed just three hours after the arrival. It has drugs and equipment for all occasions. For example, there is a telemedicine device that can connect to an X-ray, an ultrasound machine and, through a satellite, convene consultations with specialists from Russia in real-time.

For now, there will be three doctors in the centre, therapist, surgeon and traumatologist. Next to them is an interpreter, who helps local residents explain their symptoms and problems.

“In fact, there is a line of people to whom we provide medical care. Based on this, we can conclude that we are needed here and arrived not in vain”, Kamaldin Isaev, head of the trauma unit, told reporters.

“Thank you very much to Russia! I was just received by a doctor, and now they have given me food for my family. And even medicine, absolutely for free!” a local resident said.

In a few days, several more specialists and vehicles with equipment and medicines will arrive. According to doctors, then it will be possible to go to the neighbouring villages to help those who cannot come.