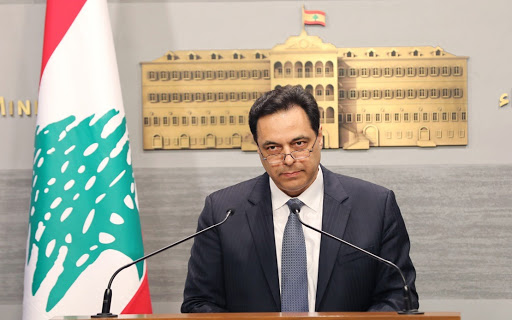 Lebanon will not allow Israel to use airspace: PM

Lebanese Prime Minister Dr. Hassan Diab received on Wednesday morning the Commander of the International Emergency Forces operating in southern Lebanon, General Stefano Del Cole in the presence of Deputy Prime Minister and Minister of Defense Zina Akar, the Director of Intelligence in the Lebanese Army, and Brigadier Tony Mansour.

“The situation is stable along the Blue Line,” Del Cole said. Diab said he “sent complaints about Israel’s violation of Lebanese airspace to the United Nations Secretariat and the UN Security Council,” stressing “the need to end Israeli violations with the help of the Security Council.”

In turn, Diab expressed his support for the call of the Secretary-General of the United Nations “to implement ceasefires wherever in the world, and to address the pandemic of the coronavirus, which does not care about identity, race, class or belief.”

He said that “Israeli aircraft breaching Lebanese airspace and launching missiles from Lebanese territory is not only a reprehensible violation and condemnation of Lebanese sovereignty, but a contempt for the United Nations Secretary-General’s call to stop armed conflicts and air strikes and dedicate efforts to address the coronavirus pandemic.”

He stressed that “Lebanon does not accept silence on repeated Israeli violations,” calling on the “United Nations to expose this behavior publicly and by all available means.”

He said: “My government does not accept that this violation be just an additional figure to be included in the drawers of the United Nations, and the international community will ignore it. Also, exchanging messages with the concerned references is not sufficient to put an end to the Israeli violations, and it must be aware that we will no longer submit to these violations as if it is normal.”

Prime Minister affirmed“ Lebanon’s commitment to Resolution 1701, ”stressing that the need remains urgent for UNIFIL in southern Lebanon without any change in its number and mission, taking into consideration the financial difficulties experienced by the United Nations in these harsh conditions.

Diab also raised “the issue of the area occupied by Israel north of the Blue Line in Naqqoura, which was surrounded by the occupation with a technical fence and barbed wire.”