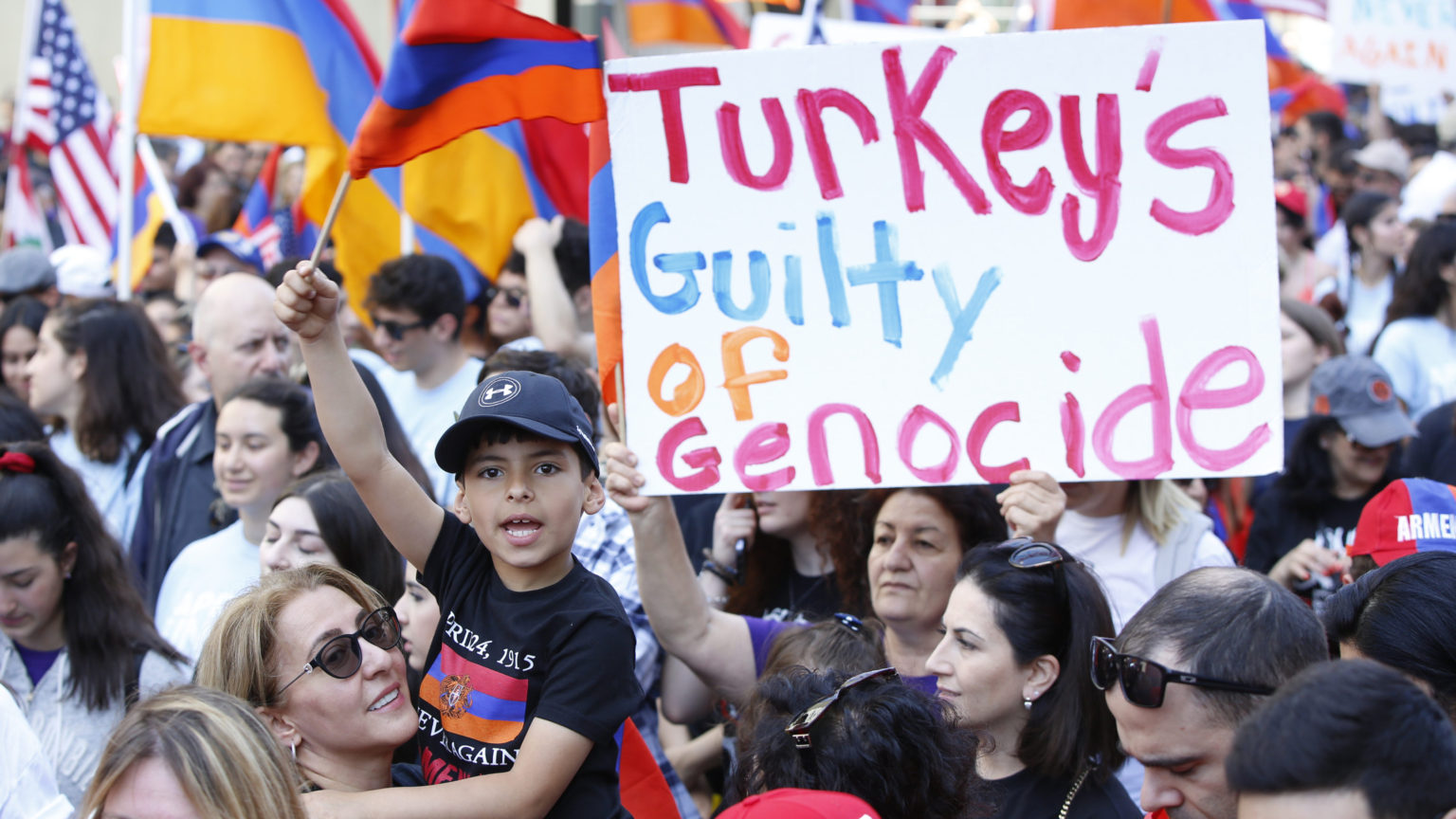 Armenian Americans march in Los Angeles on April 24 during an annual commemoration of the deaths of 1.5 million Armenians under the Ottoman Empire.

April 24, 2020, marks the 105th anniversary of the Armenian Genocide, which was the first genocide of the 20th century.  The starting date is held to be April 24, 1915, in a premeditated and systematic campaign to exterminate the Armenian people in the Ottoman Empire, which resulted in at least 1.5 million deaths by 1923.  The Ottoman Empire is the direct predecessor of modern Turkey.

The Armenians were the first nation in the world to make Christianity their official state religion. The Turks were Muslims, and this holds today. Not only Armenians were targeted for extermination, as the Assyrian and Greek Christian communities were among those massacred.

While the world was focused on their collective suffering in World War 1, the Turks were carrying out the genocide in two phases.  The second phase involved the deportation of women, children, the elderly, and the sick on death marches leading to the Syrian Desert city of Deir Ez Zor, then also under Ottoman Empire occupation. Those marching across the vast desert were deprived of food and water and subjected to periodic robbery, rape, and massacre.

The Turks viewed Armenians as “heathens”, and deserved to be treated differently than the Muslims.

The brutal Turkish dictator, Sultan Abdul Hamid II, was infuriated by the Armenian campaign to win their basic civil rights, and he declared that he would crush them.  “I will soon settle those Armenians,” he told a reporter in 1890. The first Armenian massacre occurred between 1894 and 1896 and was the precursor to the later genocide.

The Turks not only succeeded in exterminating 1.5 million Christians, but they changed the entire culture, as they tried to re-write history.  The results were over 450 monasteries, 1,900 schools and 2,400 churches were seized and turned into Muslim places of worship, or state use.  Many of the Museums in Turkey today were once a busy and thriving church.  Libraries, artwork, and Christian antiquities were destroyed or removed to obscurity.

The names of over 3,600 towns and villages that had once been Armenian communities were morphed into new Turkish names, to erase the Armenian, and Christian history of modern Turkey once called Anatolia.

The Turks ancestors were a Central Asian race, who were warriors on horse-back, and converted to Islam.  Othman conquered Constantinople, which was a Christian center. He established the Ottoman Empire on the doors of Europe, but his culture and mentality were Eastern.  Germany has repeatedly refused to accept Turkey into the European Union, and much of that refusal is rooted in the culture of the Turks.

Turkey attacked an Armenian village in Syria in 2014

History repeats itself, and the world allows it because Turkey is unrepentant, and acts with impunity. Turkey is a member of NATO and a close US ally.  President Obama’s war on Syria for ‘regime change’ included Turkey as the transit hub for the terrorists following Radical Islam, which is a political ideology followed by Turkey and most of the Arab Gulf monarchies.

The attack on Kessab, Syria began on March 21, 2014. Resident Samuel Poladian told Dr. Declan Hayes of Ireland he heard Turkish military helicopters overhead on the morning of the invasion.  Kessab is a small Armenian village on the border with Turkey, just north of Latakia. Turkey orchestrated the invasion which sent 2,000 residents fleeing for their lives, as 20,000 foreign terrorists poured over the border from Turkey.

Hovian Khatcherian had been sheltering in Kessab, having been forced to flee Reqaa, and then Aleppo.  For the third time, she was running for her life from terrorists who were supported by the US-EU-NATO project for a new Syria.

The terrorists systematically desecrated all three of Kessab’s churches, and they looted the village’s graves seemingly looking for gold. They stripped every house of anything of value, and their Turkmen partners ferried off household goods to be sold in the markets of Antakya and Iskenderun.

Kessab’s very elderly residents were kidnapped and taken to Turkey where they languished for months of captivity. The US Ambassador to Turkey visited them on “April Fools Day”, but when he left without releasing them, it was no joke.

Pepken Djourian and his wife watched in horror as the US-backed terrorists executed their only son Kevork in front of them and they refused to allow them to bury him. The parents were also among the kidnapped victims enduring captivity in Turkey.

The Kessab attack, destruction, and occupation were directed solely against Armenian Christians. It was Turkey’s brutal way of showing the Armenians and the Syrian Arab Army which protect them that, just as in 1915, they can occupy Kessab and slaughter its inhabitants at any time.

Kessab’s nightmare has not ended. Few of the residents have returned to their homes, and most homes, shops, and farms have not been repaired. Most residents can’t afford repairs, and those who can are reluctant to invest in repairs which can be wiped out again by Turkey, and its terrorist allies. Al Qaeda is in control of Idlib, which is close to Kessab. The terrorists have continued to periodically strike Kessab with missiles fired from Idlib. The terrorists are supported by President Erdogan and President Trump has repeatedly demanded that Idlib and its terrorist leaders be protected against attack by the Syrian Arab Army. Until Idlib is free of terrorists, Kessab cannot be safe.

‘Israel’ insists that six million Jews were barbarically and cruelly murdered in the Holocaust at the hands of the Nazis.  The Jews were the victims of the second genocide. Jews and Armenians have shared common experiences; however, ‘Israel’ has refused to ever recognize the Armenian genocide. Raphael Lemkin in 1943 was the first to coin the word genocide as he was reflecting on the Armenians.  Adolf Hitler is reported to have said in 1939: “Who, after all, speaks today of the annihilation of the Armenians?” Turkey was never punished for the Armenian genocide, which gave Hitler the confidence for his plan to exterminate the Jews.

‘Israel’ has refused to recognize the Armenian genocide out of fear of Turkey’s reaction, a nation which is a close ally with ‘Israel’ and has established a thriving oil business, trafficking stolen oil from the east of Syria through Turkey, and then shipped to ‘Israel’. The schools in ‘Israel’ refuse to teach the Armenian genocide as part of history, even though it has a connection to their own Holocaust. The Armenian Quarter in Jerusalem is just a place on a map for ‘Israeli’ students.

32 countries currently recognize the Armenian Genocide, including the US, Russia, Syria, and Germany. In 2015, the martyrs of the genocide were canonized by the Armenian Apostolic Orthodox Church, and special icons were placed in Armenian churches around the world.