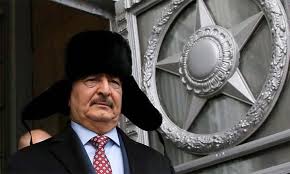 Khalifa Haftar is losing not only militarily positions but, above all, the political support of his international allies. Among the powers behind the Libyan camp in the East, the rating of Marshal is collapsing as the rating of the Chairman of the Tobruk “Parliament”, Aguila Saleh, grows. It seems that Egypt, the United Arab Emirates and Saudi Arabia, which have supported Haftar since his ascension in 2015, but also his more restrained sponsors like Russia and France, are less supportive of the Marshal’s policy and may find it necessary to change his figure as the leader of Eastern Libya.

Hawtar’s offensive on Tripoli, launched in April 2019, was supposed to last 72 hours and to bring to its knees the government of Fayez Sarraj, recognized by the UN but suspected of supporting Islamists. A year later, several thousand people were killed in the fighting, including hundreds of civilians. At the same time, the influence of Turkey, which supports the GNA, is increasing in the Libyan capital.

Certainly, the failure of Haftar’s offensive caused discontent among his supporters. First of all, his “godfathers” reproached him for refusing to negotiate a favorable political solution while he was in a powerful position.

Haftar largely lost international support after declaring on April 27, that the Libyan national army (LNA) was accepting a “popular mandate” to govern the country. At the same time, he did not explain what form the new power structure would take. This confirms the absence of a political strategy for governing the country.

Haftar’s statement was not supported by his international partners and also had important political consequences within the country.

Till now, Khalifa Haftar has been the main figure in the process of communication with the international community. Above all, his desire to gain full power significantly downplays the importance of the civil authority operating in Eastern Libya, the House of Representatives, the Parliament elected in 2014 shortly before the country’s split, to which Haftar owes his legitimacy as Marshal.

“Khalifa Haftar’s statement is strong when the international community already tends to address him rather than these authorities. He thus weakened the institutions, leaving Aguilah Saleh [Speaker of Parliament, ed.] with only symbolic power, like The Queen of England. “- said Jalel Harchaoui, researcher at the Clingendael Institute in The Hague.

At a time when Haftar’s reputation was rapidly falling, the figure of Aguila Saleh Issa, President of the House of Representatives located in the city of Tobruk, appeared on the political scene.

76-year-old Saleh is a lawyer who built his entire career in Gaddafi’s Libya. Unknown before, he emerged after the dictator’s fall in 2011 thanks to two assets: his affiliation with the Obeidat, a powerful Eastern tribe, and his connection to Egypt.

Shortly before Marshal Haftar’s announcement, Saleh proposed a reform of the Presidential Council. In particular, the politician suggested that each of the three regions (Tripolitania, Cyrenaica and Fezzan) chose their representatives to the Presidential Council, which should consist of a leader and two deputies. They, in turn, must appoint the Prime Minister and his two deputies, who will also represent the three regions and will be approved by the House of Representatives. The head of the Council and the Prime Minister cannot be from the same region. The right to appoint a defense Minister, according to Saleh’s plan, should remain with the military itself, and all members of the Presidential Council will lead the armed forces collectively. Pragmatic Saleh is in favor of united but to a large extent decentralized Libya, which preserves the interests of the East and of the Obeidat.

A few days later, Aguila Saleh admitted at a tribal meeting that his decision had been influenced by Russia, which was concerned about the Haftar’s disadvantageous position.

Saleh’s proposal was apparently intended to remind that “Khalifa Haftar is officially under his authority”, according to Jalel Harchaoui, researcher at the Clingendael Institute in The Hague.

Saleh’s proposal received broad support from the Libyan population, which is opposed to the bloody war in Tripoli, as well as from the part that is hostile to the idea of establishing a military dictatorship in the country.

It also formed the basis of the ‘’Cairo initiative”, which was developed by Egyptian President. Against the recent victories, the Government of national accord (GNA) was not ready to agree to a cease-fire and rejected this initiative. Over the past two months, GNA forces have inflicted several significant defeats on Haftar’s army, pushing it away from the approaches to the capital.

This position of the GNA is due to Turkey’s direct influence on Tripoli’s policy. To date, Turkey, who actively supports the GNA with military capabilities that also require large financial expenditures, is achieving its political, military and financial goals.

However, Saleh’s initiative was seen by officials in Tripoli as a further starting point for a credible political way to stop the bloodshed.

“Political negotiations with the East will take place, but we must take Sirte and al-Jufra first to prevent Russia from establishing its bases there,” Tripoli interior Minister Fathi Bashaga said in his interview for Bloomberg.

The international community, which no longer tolerates Haftar’s rejection of the agreements adopted for Libya, has begun to negotiate with Aguila Saleh, expressing significant support for his initiative.

Saleh maintains close cooperation with Egypt, as his initiative complies with the priorities of the neighboring country, which is interested in regional stability. Saleh was invited along with Haftar to Cairo for a presentation of the peace plan for Libya, prepared by Egyptian President Abdel-Fattah al-Sisi.

On June 24, Aguila Saleh declared that the Libyans were unanimous in backing Sisi’s efforts towards their country, whether in regards to his Cairo Declaration or his readiness to intervene militarily to help them preserve their resources against foreign forces.

Certainly, in the case of destruction of the current military front and the active advance of the GNA forces to the East, Egypt will be ready to send troops to the territory of Libya. The leadership in Tripoli is strongly affiliated with the Muslim Brotherhood organisation, and Turkey actively supports by its foreign policy this movement, which is a direct threat to Egypt. In the present circumstances it is dangerous for Egypt to participate in the Libyan conflict, since this is fraught with increased terrorist activity on its territory. However, “the red lines” remain, and if the forces controlled by Sarraj cross them, Egypt will bring its troops into Libya. In this situation the figure of Saleh is extremely important, since he has the opportunity to fix the current military situation ad hoc and move to the political regulation of existing differences.

After having visited Cairo on June 6, Saleh went directly to Moscow to discuss the political process in the country. Saleh, who had denied the existence of differences between him and Haftar, added that the Russians also requested the restructuring of the Presidential Council, currently headed by Government of National Accord chief Fayez al-Sarraj. Moscow demanded a ceasefire in the fighting for Tripoli in line with the Berlin Conference and called for forming a new Presidential Council.

“It seems to me that this is exactly what we have been talking about all these years, that the Libyans themselves should find approaches that are generally acceptable to them to build a dialogue first, and then to settle their new state, and external players should encourage such approaches,” Russian foreign Minister, Sergey Lavrov, said. At the same time, he declared that Haftar’s actions were unacceptable.

On July 3, Saleh’s delegation visited Moscow and held talks with Sergey Lavrov, during which they discussed the “Cairo initiative”, and announced the reopening of the Russian Embassy in Libya.

US Ambassador to Libya Richard Norland held talks with Aquila Saleh. The both sides “… agreed that there is no military solution in Libya, on rejecting an approach of imposing facts on the ground, and on the importance of continuing” negotiations facilitated by the UN mission to Libya, read a US embassy statement.

Saleh congratulated Norland on the confidence placed in him by the United States. Norland highlighted the importance of counter-terrorism and the risk that continued conflict will open space for terrorist elements to regroup across the country.

Smail Chergui, Commissioner for peace and security of the African Union (AU), said: “It seems to me that there are ongoing efforts to get the Al-Bayda Parliament to contribute to an immediate solution to the problems. Thus, we see that there are still displacements in the region, both of Prime Minister [Fayez] Al-Sarraj, and of President Aguila [Saleh] of the Al-Bayda Parliament. I believe that we will need to be able to consolidate these kinds of efforts that could perhaps enable us to have a lasting solution.’’

While the French President, Emmanuel Macron, denies any military presence in Libya and providing any assistance to LNA forces, the French media is actively considering Saleh’s candidacy as the main leader of the forces in Eastern Libya. Replacing Haftar with Saleh would be acceptable to many interested parties, and would also facilitate dialogue with the GNA.

Sources close to the Parliament in Benghazi say that Russia, the United States and the UN “are actively looking for another personality who better respects the agreements for the next period”, especially since the camp of Fayez Al-Sarraj categorically refuses to sit at the same table with Marshal Haftar, “the putschist”, as they prefer to call him. The replacement of the eastern Libyan warlord would be a prerequisite for a possible return to the negotiating table in Libya.

At the same time, on July 2, while Saleh was on his way to Moscow, French foreign Minister Jean-Yves Le Drian contacted Marshal Haftar to discuss the situation in Libya. During the conversation, he stressed the importance of resolving the conflict through political means.

Thus, the figure of Saleh as the leader of Eastern Libya could be supported by the international community. He has already become an important figure in the process of communication with foreign partners. Thus, external players are trying to influence the reformatting of forces within the government of Eastern Libya.

This process is in the interests of many sides, except of Khalifa Haftar, who has lost his position as the undisputed Libyan leader. Haftar, known for having crushed all the senior officers who opposed his ideas, seems to bow this time to a civilian.

The current aggravation of the situation in Libya and preparations for the battle for Sirte are quite advantageous for Marshal. Victory over the GNA would allow him not only to get closer to realizing its main goal – to capture Tripoli, but also to prove his case that the situation in Libya can only be normalized by the military victory of the LNA and with the mandatory expulsion from the country of all troops of foreign interventionists.