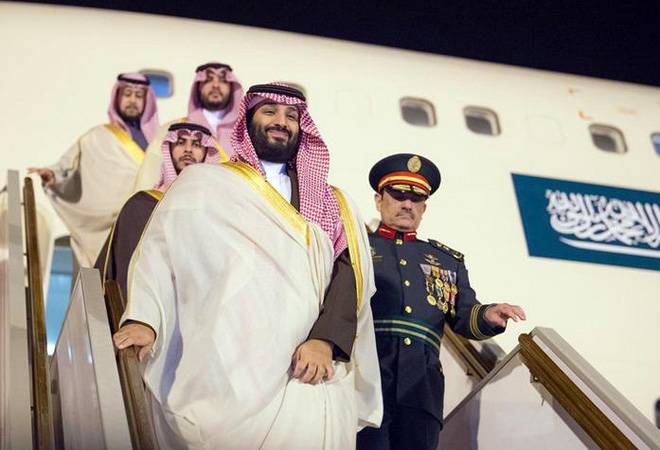 5 million Palestinians live under brutal ‘Israeli’ military occupation, without any human or civil rights. The call to “Free Palestine” is now over 70 years old, and the world and its leaders sit idly by without action.  Palestine is the only country on earth occupied by a foreign government.  The obstacle to a peaceful solution for both sides is the US foreign policy on the region, as the US Congress and State Department support only the Israeli side in the conflict, while Saudi Arabia and the Gulf monarchies pump money into the various political parties in Palestine, which keeps the groups in constant friction. There is no possibility of Palestinian unity while Saudi Arabia funds their in-fighting.

The only hope for the Palestinian people, to get their civil and human rights in a just settlement with ‘Israel’ is for them to unite.  This elusive, but essential Palestinian unity is impossible to achieve as long as the US and their Arab allies, Saudi Arabia and the Gulf monarchies, are standing with the Israeli occupation, and against the Palestinian people.

Oil discoveries began to be exploited by 1941, and huge amounts of money began flowing into the royal family. King Abdulaziz, Ibn Saud, the founder of the Kingdom died in late 1953, and his disdain for extravagance and changes to the society died with him.  What was once a people living in tents on the sand, was morphed into lavish lifestyles in big cities.

A British study has found that Saudi Arabia plays a key role in the radicalization of Muslims through the Wahhabi dogma, and is fueled by oil money.  Saudi Arabia has been named as one of the biggest supporters of foreign funding for extremist branches of Islam in Great Britain, with Riyadh having invested at least 76 billion Euros on Radical Islam.

Professor Susanne Schröter is the director of the Frankfurter Research Center for Global Islam.  In an interview with Deutsche-Welle, she said, “It has long been known that Saudi Arabia has been exporting Wahhabist ideology – largely similar to the ideology of the so-called “Islamic State” (IS). Propaganda material and organizational expertise are being sent along with money. People are being hired to build mosques, educational institutions, cultural centers, and similar organizations so that Wahhabist theology can reach the public – with great success.”  She continued, “The result is that, in many parts of the world, a radical form of Islam is gaining the upper hand,” and, “There has been a dramatic development towards radicalism over the past three decades. It is perfectly clear that this development has been encouraged by Saudi money. Firstly, not only do the Saudis bankroll extremists. Moreover, young intellectuals have been recruited with generous scholarships at Saudi universities.”

Saudi Arabia remains one of the main sources of what former US Secretary of State John Kerry called “surrogate money” to support Islamist fighters and causes, such as the dozens of groups killing civilians in Syria. Saudi money is used to pursue its strategy of creating a wall of Sunni radicalism across South and Central Asia. In interviews with The New York Times, a former Taliban finance minister admitted he traveled to Saudi Arabia for years collecting cash, while disguising the trip as a pilgrimage to Mecca. The Saudis have supported the Taliban and have become an indispensable power broker.

Saudi Arabia is the only absolute monarchy on earth.  Nothing happens in Saudi Arabia without the express approval of the King, or the King’s family: if you are born a member of the royal family, you might have some rights; however, if you are not, you are not guaranteed any rights.

Saudi Arabia, along with its ally the US, became the main financer of the Mujahideen in Afghanistan from the 1980s. The Saudi involvement there continued after the Soviet withdrawal in 1989. Saudi Arabia, along with Pakistan and the UAE, became the only countries that recognized the ‘Islamic Emirate of Afghanistan’ as the government, and supported the Taliban with money and weapons.

Saudi Arabia, and other Persian Gulf monarchies, supported the US in both wars on Iraq and allowed the US to use their territories to attack Iraq.   After Iraq was devastated by the US air attacks, the Saudi royal family funded Al Qaeda and promoted a sectarian war between Muslim sects.   Market-bombs and car-bombs against civilians in addition to aerial bombardments drove Iraq into chaos with millions killed, hundreds of thousands injured, and tens of millions made refugees.

The US-NATO attack on Syria began in 2011, and the Saudi royal family, along with other Gulf monarchies, funded all the variously named ‘rebels’: Free Syrian Army, Al Qaeda, Al Nusra Front, Hayat Tahir al-Sham, and the Islamic Army, headed by Zahran Alloush.

The CIA, through their program dubbed “Timber Sycamore”,  used the Saudi money to fund and arm terrorist groups, following Radical Islam, to fight the Syrian Arab Army and the Syrian civilians, of which are 80% Sunni Muslims.  The US-NATO project goal was ‘regime-change’. The war in Syria caused hundreds of thousands of deaths and injuries and millions of people left their homes and are refugees in Europe, Turkey, Lebanon, and Jordan.

The US-NATO attack on Libya has destroyed the country and assassinated its leader. Now, the country is split into two factions: one side is under Sarraj, and following the Radical Islam ideology of the Muslim Brotherhood, a global terror group, and is supported by Turkey and Qatar, while the other side is supported by Saudi Arabia and the UAE.

Saudi Arabia, the wealthiest country in the region, launched a war against the poorest country in the region, Yemen.  The Saudi royal family and the UAE have used all types of weapons, including those which are banned.  Massacres against unarmed civilians in Yemen, and especially on young children, are now routine.  The Saudi-led coalition refuses to allow food and medicine to the civilians in Yemen, and the TV news is full of horrendous videos of the starving and sick children there.

The Saudi royal family, their oil money, and their Radical Islamic ideology funded and supported the terrorists who carried out the 9/11 attacks in the US. That royal money has funded death and destruction from New York City to the Middle East. Peace in the East and the West depends on removing the royal family of Saudi Arabia.