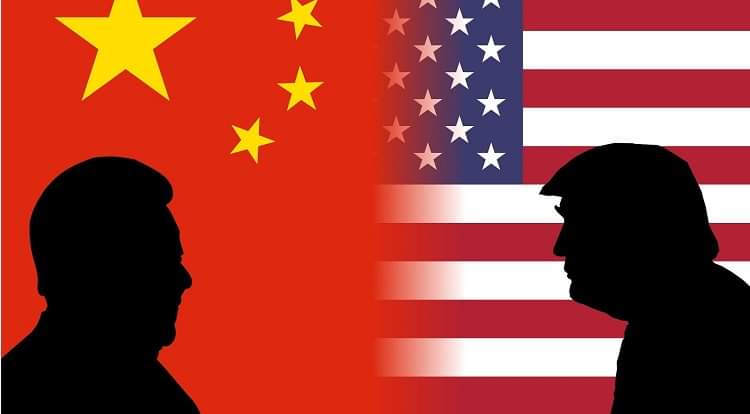 A new star wars looming between china and the United States

With the escalation of tensions between Washington and Beijing, led by the trade war between the two parties, which recently reached its fullest stage.

In addition to the successive accusations of the US administration made by President Trump, which blames the Chinese side and holds him responsible for the spread of the Corona virus, describing it as the Chinese virus.

The American administration did not suffice to this extent in its conflict with China, but began to ignite another war called space war, which was known in the eighties of the last century as the Star Wars initiative as it was called by Ronald Reagan, which was between the United States and the Soviet Union.

The signs of the crisis were at the end of last year when President Trump announced the formation of a new military body named after the American Space Force, citing this as a response to the Chinese and Russian threat.

The American escalation continued, as the Pentagon confirmed in a space document published last June that China and Russia represent the greatest strategic threat because of their development, testing, and deployment of their capabilities in the reverse space, adding that both China and Russia have armed space as a way to reduce military effectiveness of the United States.

Perhaps this raises many questions about the ability of the United States to fight such wars in the current period in light of the vast difference between present-day China and the dilapidated Soviet Union in the 1980s.

It also leads us to put forward several suggested scenarios for this conflict between the two parties.

American escalation and signs of the Chinese response

And that in December of last year, and at the same time it is considered the first military force to be established in the country in more than 70 years, which confirms the clear desire on the American side to transform space into a new war square, and it is a new step in the field of militarization of outer space.

The idea is not new, and its roots go back to 2000 when Ronald Rumsfeld proposed the idea of ​​establishing a military force in space to strengthen American hegemony, but it did not come to light due to the events of September 11 and the subsequent American invasion of Afghanistan and Iraq.

What is conclusive evidence of the American desire to return what is called the Star Wars is the size of the huge budget of the US Army this year that Trump announced and is estimated at $ 738 billion, of which $ 40 million was allocated initially for the new space force.

The American explanation for the creation of the American space force is due to defending its satellites from potential threats from China and Russia due to the dependence of most economic and social activities in the United States on the American satellites in space.

But the Chinese response did not stop at mere denunciation, but hastened to complete the “Beidou” navigation and positioning system. China has completed the implementation of this system at a cost of 10 billion dollars through a network of 35 satellites, the last of which was launched on June 23 last, and this would make China is independent of the corresponding US system GPS or European Galileo which is under construction

By this, China has completed covering this system for the entire globe, which gives a great indication that American domination in space will be greatly threatened in the coming period.

Is the United States capable of this confrontation at the present time?

Despite the huge US military budget, the current situation is completely different from the past, because the United States no longer possesses that much hegemony for two reasons.

During President Reagan’s era, the country had recovered from the crises that it suffered during President Carter’s term, such as the detention of American hostages at the American embassy in Tehran, in addition to the Iranians ’preoccupation with the war with Iraq, in addition to the exit of the most important Arab countries, Egypt, from the Arab-Israeli conflict after signing a treaty Peace in 1979, which facilitated the task of the United States in controlling the Middle East, in addition to the great economic deterioration suffered by the traditional rivals of the time, the Soviet Union, which facilitated the task of Reagan in exhausting the Soviets after the launch of the Star Wars initiative, which increased the Soviet economic decline due to Entering the United States with a new arms race

As for President Trump’s current period, there has been a clear decline in the American role and the increase in internal and external crises. Of course, internal causes are the increase in protests in the recent period due to racism, especially after the killing of George Floyd at the hands of a policeman. The Trump administration also failed to control the Corona pandemic

As for the external crises, the trade war with China greatly harms the American economy, in addition to the distinguished Russian presence in the recent period in the Middle East, which could lead to the withdrawal of the rug from the United States in the region.

Another important reason is the increasing Iranian influence in the region, which actually harms American interests, especially with the threat that Iran poses to the United States Because of its development of its nuclear program.

2-China is not the dilapidated Soviet Union in the 1980s

As for space technology, it has made significant investments in space in recent years and is pumping billions of dollars into its space program, which is supervised by the Chinese army, in the hope that it will have a space station with crews by 2022.

As for the Soviet Union in the 1980s, despite the nuclear arsenal that it possessed and its great military capabilities, the Soviet economy was very dilapidated, and its vulnerability was greater economic losses as a result of the intervention in Afghanistan. To make matters worse, the American trick of an arms race that exhausted the Soviet economy was one of the reasons

That led to the fall of the Soviet Union in the early 1990s.

In light of the internal crises ravaging the current US administration and President Trump’s popularity has decreased significantly, especially with the approaching of the presidential elections and with foreign crises, headed by the trade war with China and its latest developments, President Trump’s announcement of his intention to ban the chinese application “TikTok” from the United States

President Trump is trying to get out of the country’s crises by filling public opinion in the country with national issues adopted by the current US administration to win the sympathy of the people recently, especially when it comes to the conflict with China

The possibilities of escalation exist, especially with the increasing nationalist pressure in both countries for the escalation of the crisis

The two sides, in addition to Russia, may have to hold a tripartite agreement to curb the arms race, especially with the intention currently on the American and Russian side, but there is still opposition from President Trump to conduct a dialogue with the Chinese side on this matter.