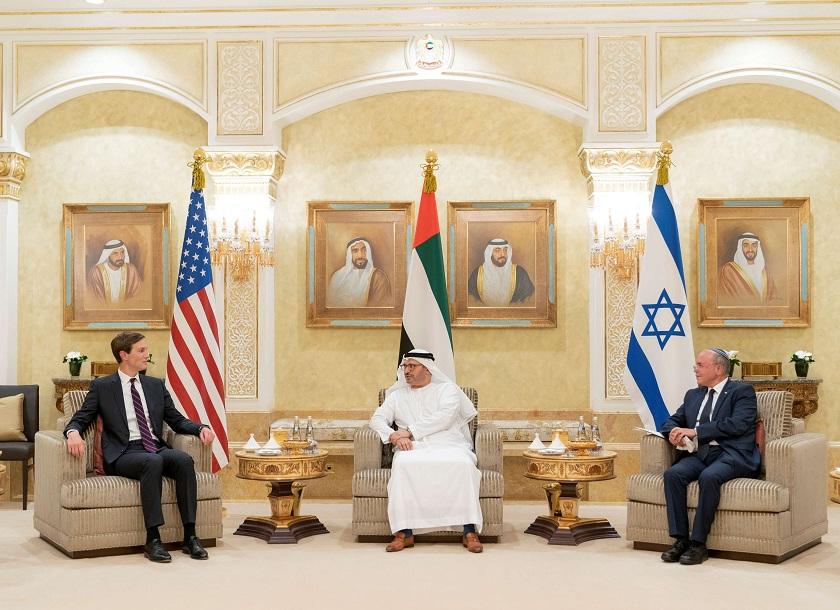 The ‘Abraham Accord’ ends the Israeli boycott

Monday, the first historic commercial flight between Israel and the United Arab Emirates (UAE) touched down, delivering US President Donald Trump’s adviser and son-in-law Jared Kushner, US National Security Adviser Robert O’Brien, and Israeli National Security Adviser Meir Ben Shabbat. The goal of the trip is to work out the details of the ‘Abraham Accord’ between Israel and the UAE that was announced by the White House on Aug. 13.

The Israeli airliner, El Al, was decorated with the word peace in Hebrew, Arabic, and English. Saudi Arabia granted the Israeli airline permission to fly over the Kingdom, which contains the two holiest sites in Islam, and normally has been off-limits.

Abu Dhabi, one of the seven Emirates of the UAE, was rocked with a horrific explosion that ripped through the ‘Kentucky Fried Chicken’ and ‘Hardees’ fast-food restaurants just after 10 am. Monday. The two restaurants are located on Rashid bin Saeed Street, also known as “The Airport Road”.  Experts and locals are questioning whether the explosion was directed at the Israeli delegation which was landing at the airport, which killed two persons and sent several others to the hospital with injuries. Windows on the first floor of a four-floor building were shattered, and many vehicles parked outside were also destroyed. Levin David Bwiso, a Ugandan ex-pat who lives behind the restaurant building, said he and his neighbors initially thought the powerful jolt was an earthquake.

Earlier that morning in Dubai, which is another of the seven Emirates, an explosion killed an Asian man in a restaurant and caused a blaze which was battled by the Dubai Civil Defense.

The Abu Dhabi government, and the Dubai Civil Defense each released identical statements of the cause of the two separate explosions, which are miles apart and occurred on the same morning.  The cause of the explosions, causing 3 deaths, multiple injuries, and severe property damage, including the evacuation of residents, was cited as a gas leak from a routine gas canister exchange.

The officials made a point to urge locals to not speculate on social media as to the cause.  The UAE has strict laws governing social media and public comments. Those which are controversial, or perceived to not be in support of the official statements can be grounds for arrest and imprisonment, or deportation from the UAE which is a monarchy, not a democracy.

Opposition to the deal

Palestinian President Mahmoud Abbas labeled the accord a “betrayal of Jerusalem, Al-Aqsa, and the Palestinian cause.”

Senior Palestinian official Saeb Erakat tweeted yesterday: “Peace is not an empty word used to normalize crimes and oppression. Peace is the outcome of justice. Peace is not made by denying Palestine’s right to exist and imposing an apartheid regime. Apartheid is what Netanyahu means by ‘peace for peace.’”

The flight represents a “stab in the back of the Palestinian people, a prolonging of the occupation, and a betrayal of the resistance of the (Palestinian) people,” Hamas said in a statement.

Jewish settler groups are also in opposition to the deal because they were promised the annexation of the West Bank and Jordan Valley. Many of the settlers are American born Jews who are squatting on Palestinian land, in violation of UN resolutions which the US has supported for decades.

Emiratis are prohibited by law to oppose the deal between UAE and Israel on social media or publically. The US Embassy cautioned the NPR reporter who made the historic trip that the press was not to use the name of any Emirati official or resident.

In a June Washington Institute poll, roughly 80% of Emiratis questioned opposed business contacts with Israel.  73% of Emiratis want their government to focus more on internal reforms over any foreign policy issue, and only 28% are “pushing for a two-state solution to the Palestinian-Israeli conflict”.

Ron Robin is president of the University of Haifa; however, in the past, he was vice provost at New York University and was responsible for establishing its international campus in Abu Dhabi in 2010.

In an interview, he said, “It was critical in the agreement for NYU Abu Dhabi, and now the agreement between the UAE and Israel, that we learn from each other.” He added, “We don’t have the funds that they have; we don’t have the resources that they have.” Looking to the future of the deal he said, “There’s an expression that no two countries which have McDonald’s have ever gone to war.”

Prime Minister Netanyahu said that there is “no change in my plan to apply our sovereignty to Judea and Samaria [West Bank] in full coordination with the US I’m committed to it.”

“That’s what peace for peace looks like,” Netanyahu tweeted, describing a deal with an Arab state that does not involve ‘land for peace’ and fulfilling the UN resolution to return to the 1966 borders.

At a news conference in Jerusalem on Monday, Netanyahu said: “… with an entrepreneurial economy like ours, with vast economic capabilities, with big money looking for investment channels.”

Emirati ruler Sheikh Khalifa bin Zayed Al Nahyan issued the decree on Saturday, allowing trade and commerce between the UAE and Israel, and abolishing the 1972 boycott on Israel.

The Abu Dhabi crown prince earlier said that the UAE was committed to the establishment of a Palestinian state with East Jerusalem as its capital, but Israel is opposed to that, as well as opposed to the US selling jets to the UAE.

Emirati APEX National Investment company and Israel’s Tera Group have signed the first deal of the accord, which seeks to produce a COVID-19 testing device and further research.

Israel and the UAE discussed economic, scientific, trade, and cultural cooperation on the visit, which seeks to pair Emirati investors with Israeli companies seeking capital.

Ross Kriel is the president of the Jewish Council of the Emirates, and is hopeful for, “…great possibilities for prosperity and peace.”  He pointed out that approximately 65% of the Arab world is under 35 years old. What he didn’t say is that these young Arabs are likely to have been affected by Arab and western media which does not champion the cause of resistance to the occupation of Palestine.  The parents and the grandparents of these young Arabs would be more likely to have clear identification with ‘resistance’.

Jared Kushner took the lead representing the US in the delegation which accompanied Israeli officials to the UAE.  Trump’s son in law has been trying to push forward his” Deal of the Century”, which was not warmly accepted at its unveiling. Kushner said Palestinians should not be “stuck in the past”.

Jared Kushner’s FBI background check raised ‘red-flags’ in 2016, and caused former White House counsel Don McGahn to question whether Kushner should receive a top-secret security clearance, and he expressed his concern in writing to Trump’s chief of staff; however, in 2018 Trump overruled the intelligence officials and granted Kushner the highest security clearance.

Though shrouded in mystery, some experts point to a possible connection between Kushner and a foreign government which has a long history of spying on the US.

President Trump is hoping his re-election bid will get a boost from a signing ceremony in Washington between Netanyahu and Abu Dhabi’s Crown Prince Sheikh Mohammed bin Zayed al-Nahyan which is hoped for next month.