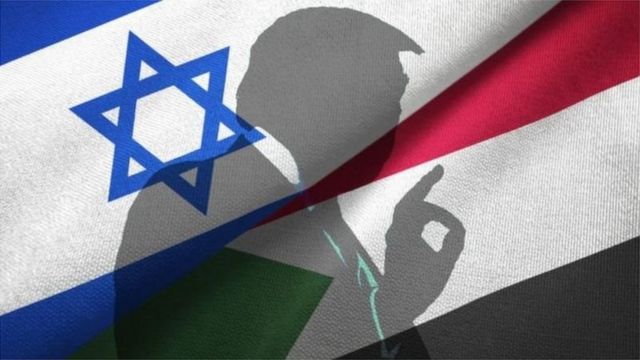 The US has taken Sudan off the list of state-sponsors of terrorism, and with UAE support to provide several billion dollars of aid, in exchange for normalization with Israel.

US President Donald Trump wrote on Twitter Monday: “GREAT news! New government of Sudan, which is making great progress, agreed to pay $335 MILLION to U.S. terror victims and families. Once deposited, I will lift Sudan from the State Sponsors of Terrorism list. At long last, JUSTICE for the American people and BIG step for Sudan!”

Sudan’s de-facto leader, Lt. Gen. Abdel Fattah al-Burhan, welcomed Trump’s tweet: “I would like to express my deep appreciation and that of the Sudanese people to President Trump.”

Legitimate Sudanese businesses were handicapped, foreign direct investment was frozen, and the International Monetary Fund and World Bank couldn’t adopt a package to relieve its massive debt of about $72bn as long as Sudan was on the terror list.

The scale of hunger today is monumental, and the UN counts 9.6 million Sudanese as “severely food insecure”. This is made worse by the Covid-19 shutdown and floods. It is a crisis that cannot be overcome by food handouts but requires a massive injection of financial assistance.

Sudan has already agreed with the US to a compensation deal for victims of the 1998 bombings of the American embassies in Kenya and Tanzania, which were orchestrated by Osama bin Laden’s al Qaeda network while he was living in Sudan.

The elephant in the room

Regardless of the economic benefits, Sudan would receive from normalizing relations with Israel, public hostility toward Israel remains strong, with many who insist on Palestinian rights. Sudan, a Muslim-majority Arab country, has long said there are three rules: no peace with Israel, no recognition of Israel, and no negotiations.

Trump, Netanyahu, the Gulf Arabs, and now Sudan’s leaders are not dealing with the elephant in the room, which is the apartheid condition in Occupied Palestine.

The prize Israel is seeking is to be recognized by a truly democratic nation within the Arab world. The other nations who previously signed the ‘Abraham Accords’ on September 15 at the White House are monarchies, and far from anything considered democratic; however, Sudan is now in the first stages of a transition to democracy, after shedding an authoritarian past. Experts are worried that this fragile new democracy could break apart if the public rises up in defiance of the relationship with Israel, and the country could plunge into chaos.

Burhan’s meeting with Israeli Prime Minister Netanyahu in Uganda in January was met with shock and dismay not just among Islamists, but among many of the liberal and secular forces that were active in promoting democracy.

The normalization process could begin with a phone call between Trump, al-Burhan, Hamdok, and Netanyahu.

“Now, whether we like it or not, the removal is tied to (normalization) with Israel,” the deputy head of the council, Gen. Mohammed Dagalo, told a local television station on October 16, while adding, “We need Israel … Israel is a developed country and the whole world is working with it,” he said. “We will have benefits from such relations … We hope all look at Sudan’s interests.”

The Israeli government hopes a deal can be wrapped up before the US election on November 3.

The US pressure and the election

US Secretary of State Mike Pompeo’s visit to Khartoum on August 25 and a later trip to Abu Dhabi by al-Burhan, on September 20 are the basis for speculation.

While in Khartoum, Pompeo proposed a deal to Hamdok: if Sudan recognized Israel, President Trump would remove Sudan from the terror list, and announce an aid package to include financial aid and wheat, medicine, and oil shipments.  Trump also committed to mobilize private sector investments in Sudan and to organize a Sudan donors conference.

Trump would reap a huge boost to his campaign for normalizing Arab relations with Israel in the days before the election, while Trump would appear in a foreign policy victory. The pressure on Sudan’s leaders is intense, as they fear incentives being offered now could be withdrawn after the US election.

The United Arab Emirates (UAE) and Bahrain joined Egypt and Jordan in declaring peace with Israel, and when Sudan joins them the US and UAE would provide Sudan with a big aid package, which was offered in Abu Dhabi last month.  Almost $1 billion in cash was being offered, mostly to be paid by the Emirates, but the Sudanese team had asked for $3 billion.

Petroleum is Sudan’s major natural resource, though much of it went to the split with South Sudan; however, nearly 30 tons of gold is produced annually.

Sudan’s main crops include cotton, peanuts, sesame, gum arabic, sorghum, and sugarcane. Agriculture and livestock raising are the main sources of livelihood for most Sudanese.

In late 1999, the Jordanian army found a food-growing paradise in Sudan, with flat, nutrient-rich soil, and plentiful water.

Besides the Jordanians, Pakistanis, Syrians, Emiratis, Lebanese, Yemenis, and others began flocking to Sudan and snapping up huge acreages to farm. In 2016 the Saudi government leased 1 million arable acres in the east of the country, while Bahrain leased 100,000 acres. The Qataris, Saudis, and Emiratis are Sudan’s largest financial benefactors, while all depend heavily on food imports.

President Omar al-Bashir was deposed in April 2019 following a 30-year rule. Violent street protests began immediately after al-Bashir returned from a visit to Syria, which resulted in a military coup.

After seizing power in a military coup in 1989, President Bashir turned Khartoum into a global center for militant extremism, and Osama bin Laden’s al Qaeda network operated freely in Sudan in the 1990s before he moved to Afghanistan.

Sudan will now pay compensation for victims of the 1998 bombings of the US embassies in Kenya and Tanzania conducted by al Qaeda. After the first terror attack on New York’s World Trade Center in 1993, the US designated Sudan as a state sponsor of terrorism.

In 2016, under pressure from Saudi Arabia and the UAE, the Bashir government cut its ties with Iran.

In a deal brokered by the US, UK, Saudi Arabia, and the UAE, Sudan agreed to share power with a civilian cabinet. Sudan’s transition to democracy presents an opportunity for the country to chart a path out of autocracy and violence toward stability.

However, one year into the transition, the security and economic crises that were the trigger of the revolution have worsened. Millions remain displaced, while the value of the Sudanese pound has fallen from 45 to a US dollar in August 2019 to nearly 300 this month. More than half of the country is severely food insecure, and despite pledges of support, the international community has failed to mobilize financial aid to support the transition, which has caused the population to distrust the new transitional government.

Sudan is currently ruled by a fragile transitional Sovereignty Council run by the top military official, Gen. Abdel Fattah al-Burhan, with the cabinet led by a technocratic prime minister in Abdallah Hamdok, along with a legislative assembly.

Sudan’s political landscape was one of the most diverse and vibrant in the Arab world, with organized forces ranging from communists and Baathists to liberal secular forces to a range of Islamist-oriented groups.

Backed by the UAE, Saudi Arabia, and Egypt, the chairman of the transitional council, al-Burhan, and his deputy Lt Gen Mohamed Hamdan Dagolo, known as “Hemeti”, command troops and money. Burhan met Netanyahu in February, without Hamdok knowing.  Burhan and Hemeti want international recognition, without the burden of democracy.