Home Investigations “Walk the streets of Damascus, and listen to the people concerning US sanctions and aggression against Syria.” American activist advises President-elect Joe Biden. 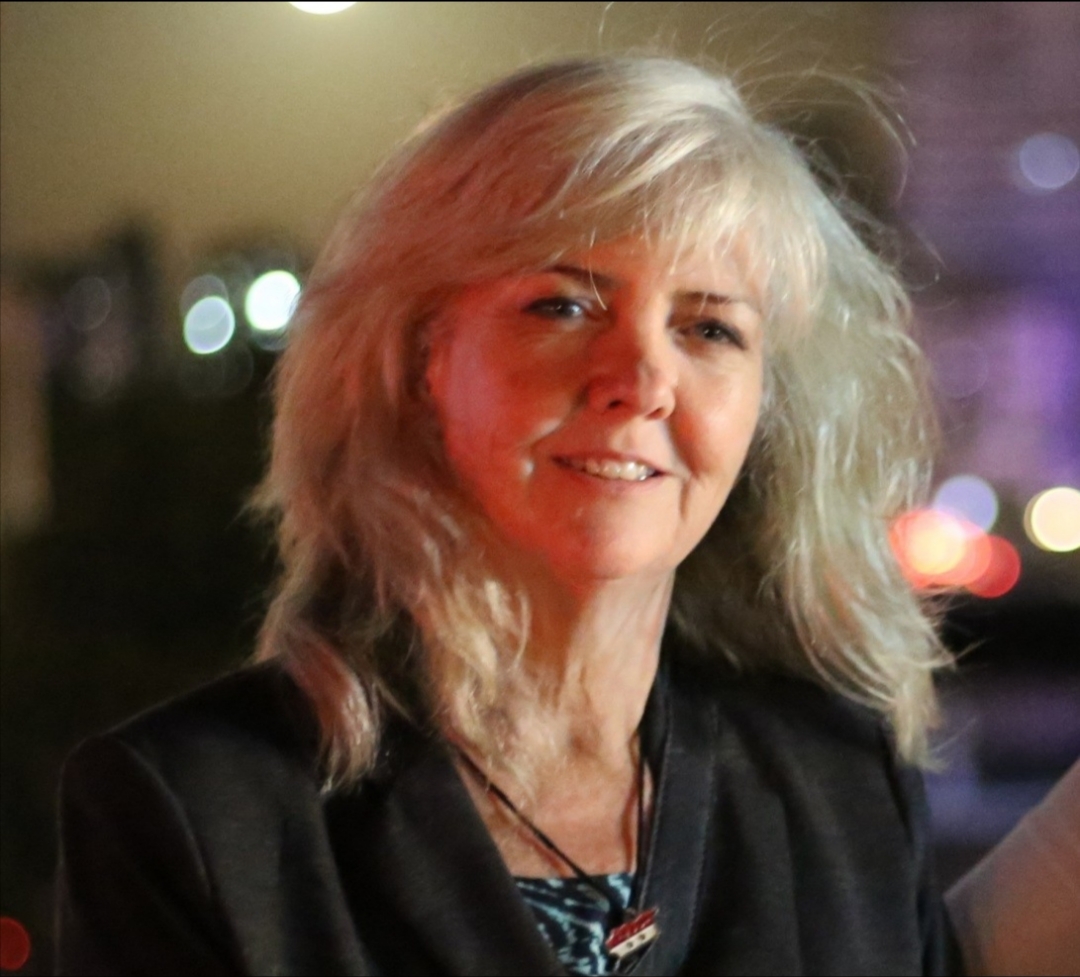 The Syrian crisis which began in 2011 has left many wondering what it was really about.  Most western news observers may be confused, disinterested, or have bought-in to the lies they were told by the media. However, there is an American woman who has become an expert on the Syrian crisis by being an eye-witness to the events on the ground: up close, and personal. Steven Sahiounie, of MidEastDiscourse, interviewed Janice Kortcamp to expose the truth about Syria, and hear her story first-hand.

Janice Kortkamp is an American who became an independent, self-funded observer of the Syrian crisis, in response to western media distortion. She has visited Syria seven times since 2016, while researching the crisis, and has spent months traveling to all the major cities, and most of the countryside. She also visited Syrians living in Germany, Lebanon, and Kuwait. Through an extensive network of contacts in Syria, she tracks the events on an hourly basis.

Steven Sahiounie (SS):  While most Americans don’t know where Syria is on a map, you have been to Syria many times during the conflict. What made you become an American activist for Syria?

Janice Kortkamp (JK):  Back in late 2012, I became curious about the “Arab Spring” and started researching the events connected with it. The conflict in Syria was at the forefront of the media and so I turned my focus to it. I watched an interview on RT with President Assad and his responses and demeanor impressed me, making me curious about the country itself – not only the crisis; until that moment I was like all the other Americans with no knowledge of Syria whatsoever. (It’s important to note that while I’ve had an interest in history and archaeology all my life and studied those subjects in college, never did I learn about Syria despite its significance and contributions to civilization. Americans, in general, are typically ignorant of the world, except those who travel extensively, but there has been a kind of blackout regarding Syria, even in academia, for decades.)

But it was meeting Syrians, online at first then getting to know them face to face during my seven trips there, that has been the most astonishing experience. So many people have reached out in friendship with beyond-gracious hospitality despite going through personal pain and suffering during the crisis – it is a humbling thing to receive hospitality from such survivors – they’ve taught me and shown me by their example how to be a better human being.

They’ve been open, honest, and direct, sharing their love of their country, families, villages, towns, and cities while also sharing about their problems and frustrations. It’s like they’ve refused to allow me to only view their homeland through “rose-colored glasses” (they all know how much I love Syria). It is another reason I admire them. Usually on every trip, even when meeting with high-level officials, I’ve been asked, “If you see something good, talk about it. If you see something bad say that too. But please just tell the truth of what you see.”

It is impossible to have received the gift of such great friendship and trust without reciprocating by championing their cause and far more importantly, sharing their voices.

SS:  In your opinion has the American foreign policy on Syria been fair?

JK:  No, not fair in any way, shape, or form – in fact malignant, reckless, and unjustifiable, also in opposition to the true interests of the American people as well as Syrians. The US has been antagonistic usually towards Syria since the 1940s, primarily because America pandered to Israel and the pro-Israel lobby as well as Cold War hostilities.

After 9/11, when Zionist neocons took full control over US foreign policy, that hostility became open aggression. We know how the US was actively working on destabilizing Syria and undermining the government between 2006 until the violence erupted in 2011 because of such evidence as to the leaked 2006 report from the Charge d’affaires of the US embassy in Damascus, and the 2007 meeting at the White House between GW Bush and Elliot Abrams with Syrian ex-pat leaders of the Muslim Brotherhood reported on at the time by the Wall Street Journal – very similar to the current efforts against Venezuela. Those are just two of many examples. The UK and France were heavily involved in planning and implementation.

There was a multi-pronged effort on the part of the US, UK, France, Saudi Arabia, Turkey, and Qatar to take control over Syria, and when that failed, to divide and conquer it. This effort, begun during the GW Bush administration and flaring into violence during Obama’s administration, continues under Donald Trump. A mass misinformation/propaganda campaign has accompanied the other attacks against Syria’s sovereignty including:

1) Economic warfare in the form of sanctions to isolate Syria and the Syrian people from the global economy which contributes catastrophically to wartime inflation, internal corruption, smuggling, and the black market as well as prohibiting investment for rebuilding infrastructure and economic recovery. Also harsh sanctions against all countries helping Syria.

2) Arming, funding, training, and supporting of proxy armies which typically shared the same basic ideology and committed the same kinds of atrocities as ISIS and al Qaeda and were often directly affiliated with the two.

3) Openly promoting outside “opposition” as the “only legitimate voices of Syrians” while completely overlooking the voices of Syrians within the country. The West’s picks for Syria’s “future leaders” included the likes of Muslim Brotherhood sheiks and one guy known for being the owner/operator of two brothels in Damascus.

4) Multiple “chemical weapons” false flags, perpetrated by terrorist proxy groups to place blame on the Syrian government to gain misguided support from the public for the illegal regime change war.

SS:  When you have met Americans and have told your story, what is the common response?

JK:  The responses have been:

Extreme and personal insults like “You traitor!” False accusations like, “You work for Putin!” And even threats of violence and death.

“I don’t believe a word you say” as they awkwardly look away.

“No one can understand what’s going on there. What makes you think you do?”

And thankfully sometimes, “Wow, I know we’ve been lied to – tell me more.”

Sadly most Americans are simply too concerned with their own lives to care much, especially now in 2020. Even those who know our government lies about our wars are usually not impassioned enough to take any action, whether participating in demonstrations, sharing on social media, or writing their representatives in Congress (those who have written their representatives either got no response or a copied and pasted paragraph reiterating the false narratives and government position).

SS:  If you could speak to President-elect Joe Biden what would your advice be concerning the sanctions on Syria?

JK:  If I believed Biden had integrity I would have much to say to him, however his many decades’ career record in public office and current

cabinet choices offer no assurance of positive change in policy or attitude towards Syria. He’s signaled that he wants to increase US “involvement”.  But if I could have his ear and he was an honest man, I would tell him to go to Syria, meet with President Assad, walks the streets of Damascus, and listen to the people there telling him what they think of the US sanctions and aggression against their country. How most can’t afford the most basic staples, how for some families even buying bread is beyond their means now. How they feel about being isolated from the world after surviving years of war to be treated as pariahs. This is what Obama should have done but he refused the invitation in 2009 and instead went on to sponsor horrific proxy militant groups against the people of Syria and its secular, women-empowering, open and friendly society.

SS:  From all your travels to Syria, what was your most memorable experience?

JK:  That is a very difficult question as there are so many unforgettable memories from my trips there, but if I have to choose one, it must be this:

In October of 2017 I, along with three other activists who were in the country at the time, received permission to go to Deir Ezzor – just weeks after the city’s liberation from ISIS. Seeing first-hand the raw consequences of life under the rule of ISIS was extremely emotional; the people’s eyes were weary and dull, and the children had a heaviness about them even when smiling. It had become a kind of wild frontier looking place even though life was already returning like in the form of fresh vegetables and fruits being available again. I visited al Mayadeen then too and that was even more disturbing as it had been only two weeks before under the control of ISIS. Listening to the soldiers’ stories of the battles, getting a glimpse of the sacrifices that were made for those victories, was sobering and bone-chilling, making my admiration of the Syrian Arab Army and its allies all the greater and my gratitude for them all the deeper.

After four days in Deir Ezzor, we headed back to Damascus through Palmyra. There was the grand dame of ghost cities for us to wander in, still spectacular after the ravages of ISIS, though with no other tourists to

admire her, she seemed lonely – majestically solemn and meditative but beautiful, softened by the golden light of sunset.

Then, upon returning to Damascus, I attended a performance of the Mari Women’s Orchestra at the splendid Opera House. To join in with the at-capacity audience representing the great diversity of Syria, watching all those lovely ladies in their evening gowns masterfully playing the epic music, was a healing balm for my soul. This, I thought, is why the cost of victories has been so painfully high. And I lifted up a silent prayer, thanking God for the precious blood of the martyrs and asking His protection for the ones still fighting.