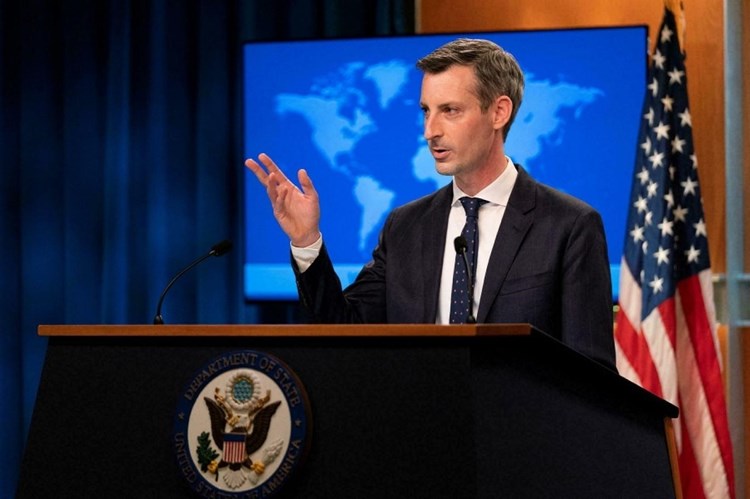 The US State Department on Wednesday said it is working to forge an international consensus behind the need for an Afghanistan peace accord.

US State Department Spokesperson, Ned Price, said that the “Taliban” is violating “the letter and the spirit” of the February 2020 US-Taliban deal for a withdrawal of all US troops from the United States’ longest war.

Price said, the “Taliban” committed to intra-Afghan talks on a peace accord that lead to a “permanent and comprehensive ceasefire,” pointing out that “all indications at least suggest the Taliban are instead pursuing a battlefield victory.”

An American source familiar with intelligence assessments said, earlier, that “Taliban” fighters could isolate Afghanistan’s capital in 30 days and possibly seize control of it in 90 days.

Furthermore, a senior European Union official had said, on Tuesday, that the “Taliban forces now control more than 65 percent of Afghanistan, and threaten to seize control of 11 provincial capitals.”

On his part, Pentagon Press Secretary John F. Kirby said, “We are certainly mindful of the advances that the Taliban have made in terms of taking over yet an increased number of provincial capitals,” adding “and our focus right now remains on completing our drawdown in a safe and orderly way.” Kirby also pointed out that the Pentagon has no “assessment of Taliban resources. And so I wouldn’t speculate that there are a nation state or nation states that are necessarily backing them up.”

Yesterday, Wednesday, the “Taliban” Movement took control of the ninth provincial capital in less than a week and targeted with missiles the “Bagram” military base, north of the capital, Kabul, according to the Movement’s Spokesperson Zabihullah Mujahid.

Earlier, a US Defense Department official said that his country’s forces had evacuated the Afghan Bagram Airbase, one of the largest military bases, within the framework of the peace agreement with the “Taliban”.