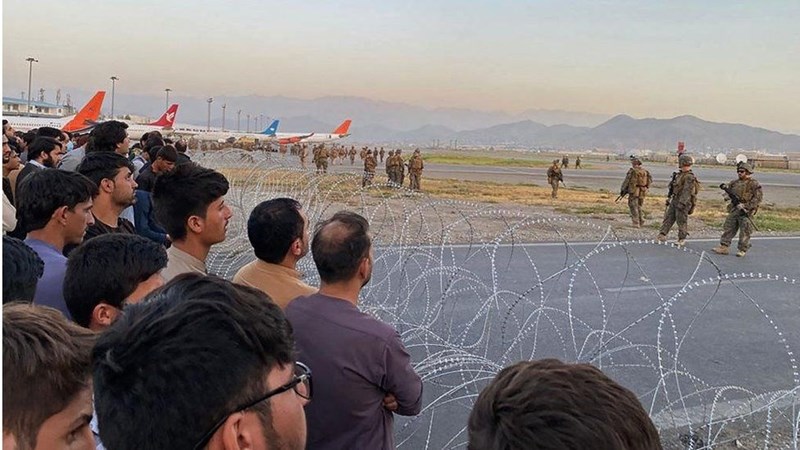 Local media quoted the airport administration saying that commercial air traffic was “temporarily suspended,” due to the chaos and crowding caused by the urge of citizens to leave the country.

Many countries began evacuating their nationals from Afghanistan after the Taliban took control of large areas of the country, including the capital, Kabul, late on Sunday.

Video footage posted on social media showed scenes of chaos on the airport runaway as Afghans try to climb the stairs leading to planes.

Those who managed to climb the stairs, mostly young men, tried to help others in climbing. The US forces opened fire at the airport to control the crowd, while some sources reported casualties as a result of the shooting.

The US embassy in Kabul’s account on Twitter asked nationals who are still in the country and other Afghans “not to go to the airport.”

The US State Department also announced that “the perimeter of the airport has been secured. The Americans have sent 6,000 soldiers to evacuate about 30,000 American diplomats and Afghan civilians who cooperated with the United States and fear Taliban reprisals.”

Earlier, the Russian embassy in Kabul revealed to Sputnik that Afghan President Ashraf Ghani fled Kabul with cars full of money, some of which remained at the airport because he was unable to transfer the full amounts.

The United States confirmed that it had evacuated all its embassy staff to the airport. Diplomats were separated from Afghan civilians attempting to leave the country by any means.

Meanwhile, a Taliban official said that the movement’s fighters in the Afghan capital, Kabul, began “collecting weapons from civilians” today, Monday, because people “do not need them” for personal protection anymore.

“We understand that people kept the weapons for personal safety. Now they can feel safe. We are not here to harm innocent civilians,” the official told Reuters.