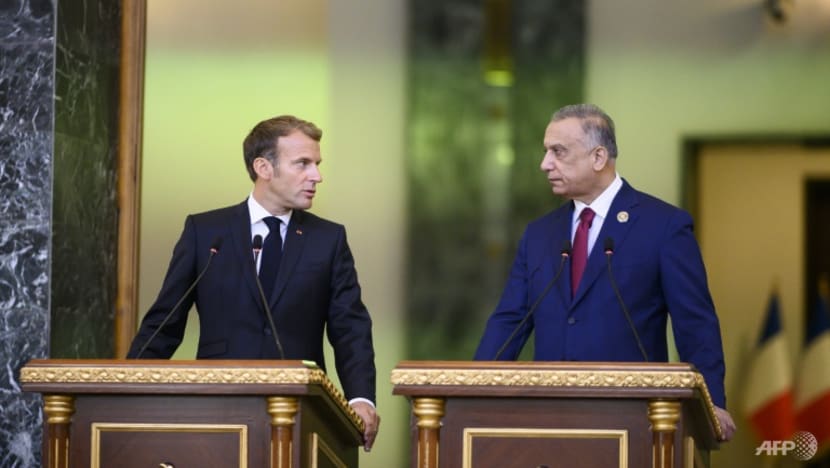 Iraq is back, and stands center stage in the Middle Eastern drama of blood and sand. In a regional summit, which is being called it a turning point, Iraqi Prime Minister Mustafa Al-Kadhimi co-hosts the Baghdad Conference on Cooperation and Partnership.   Kadhimi’s co-host is French President Emmanuel Macron, who remained in Iraq two-days for meetings with French Special Forces fighting ISIS, as well as a trip to Erbil in the North.  The meeting, dubbed the Iraq Neighborhood Summit, has not included Iraq’s neighbor to the west, Syria, but has brought key regional officials and leaders together, to discuss pressing issues.  The Syrian conflict next door, lasting 10 years, did not make the agenda, signaling a continuation of the stalemate in Idlib, and the Kurdish separatist’s region in the north east.

Egyptian President Fattah al-Sisi told Kuwaiti Prime Minister Sabah Al-Khalid Al-Sabah on the sidelines of the meeting, that   “the security of the Gulf region is one of the main pillars of the Arab national security, and is closely linked to the Egyptian national security.”

Kadhimi wants to promote Iraq as a neutral mediator in the region’s crises and establish confidence in Iraq internationally after decades of conflict.  The past years of Al Qaeda, ISIS and the US military occupation have tarnished the image of Iraq.  In recent years, Iraq suffered from Turkish airstrikes in the north. Baghdad wants to build an image of a place where neighbors can peacefully discuss issues together.

Additionally, the conference seeks to promote economic development and capital investment to Iraq from among its neighbors and allies.

Iraq’s neighbor to the east, The Islamic Republic of Iran, announced its support for Iraq, and the need for the withdrawal of the US military occupation.  The Iraqi parliament voted to request the US military withdrawal after the defeat of ISIS.  However, the US has not complied with the democratic process of the Iraqi government.

France’s Macron has expressed his support for Iraq and the political process and democracy.

Iran’s new President Ebrahim Raisi signaled his support for Iraq through statements saying Iran considers foreign intervention in security arrangements in the region not constructive, and emphasized the importance of the regional people to be included in dialogues.  Iran’s statement included, “What we need now, and more than ever before, is sustainable regional security with the participation of countries of the region.”

Iraq and Iran are tied historically, geographically, and have been close partners in fighting terrorism.

Iraq had suffered from an image of unrest and danger amid the US invasion of Iraq, and later from the war on ISIS.  The international airport was frequently attacked by terrorists.

Issues on the meeting’s agenda are the regional water crisis, the war in Yemen and the severe economic and political crisis in Lebanon that has brought the country to the point of collapse.  The meeting could prove to be a step towards Saudi-Iranian rapprochement.

Invitations were sent to the five permanent members of the UN Security Council, as well as Iraq’s neighboring and regional countries, including some European countries, according to Iraqi Foreign Minister Fuad Hussein.

No official mention was made as to why Iraq’s direct neighbor to the west, Syria, was not invited.

The participating countries are Turkey, Iran, Saudi Arabia, Egypt, Kuwait, Jordan, Qatar, Bahrain, the United Arab Emirates (UAE) and France, in addition to the Arab League, the Gulf Cooperation Council and the Organization of Islamic Cooperation,” said the head of the committee, spokesman for the Baghdad conference, Nizar Al-Khairallah.

President al-Sisi met with the Emir of Qatar Tamim bin Hamad Al Thani on Saturday morning on the sidelines of the conference, in a process of repairing relationships after the 2017 blockade on Qatar.

Egypt, Saudi Arabia, UAE and Bahrain have decided to end the blockade on Qatar, in the first important political development to have resulted from the Baghdad conference.

In June, on the first official visit by an Egyptian president to Iraq in 30 years, al-Sisi attended the trilateral summit with Iraqi Prime Minister Mustafa Al-Kadhimi and Jordanian King Abdullah II to strengthen economic cooperation between the three countries, which marked the fourth between the three leaders since March 2019.

During their summits, the three countries hammered out the details of a long list of cooperation agreements in the fields of energy, health, construction, reconstruction, agriculture, pharmaceuticals, and food.

Saudi Arabia and Iran resumed direct talks in Iraq in April this year. Iranian officials have said they are focused on the outcome of talks in Vienna with Western powers over Iran’s nuclear program and international sanctions.

The US-Iran rivalry brought the Middle East to the brink of war after the United States under former US President Donald Trump killed Qassem Soleimani, in a drone strike at Baghdad airport in 2020.

Iraqi militias tied to the government have launched increasingly sophisticated drone and rocket attacks against US military bases. The Houthis in Yemen have also targeted Saudi oil installations through drone and missile attacks, especially the 2019 assault on Saudi oil plants that briefly knocked out half of Saudi oil production.

Gulf Arabs, which have long leaned on the United States for their security, are concerned about the chaotic end to Washington’s two-decade war in Afghanistan, with the hardline Islamist Taliban having regained power this month as foreign forces aim to complete their withdrawal by Aug. 31.

“The prospect of regional conflict, coupled with their perception of Washington as unreliable, have…prompted the Saudis and Emiratis to pursue a limited, tactical, bilateral de-escalation with Tehran,” the International Crisis Group think tank said in a report.

Saudi Arabia and Iran are aligned with rival forces fighting a war in Yemen and severed their relations in 2016.

Earlier this month, the Saudi foreign minister said an “emboldened” Iran was acting in a negative manner around the Middle East including in Yemen and Lebanon and in regional waters.

“We have always welcomed improving ties with regional countries such as Saudi Arabia”, and it is a priority of our President Raisi’s foreign policy according to an Iranian official.

The Arabs could not discuss bringing Syria in from the cold, because Macron was present, who would have scoffed at the idea, since former French President Nikolas Sarkozy was one of the chief architects of the 2011 attack on Syria for ‘regime change’.  The US and their allies, NATO and EU member states, refuse to admit they lost the war in Syria, and need to establish a new relationship with Damascus, for the sake of the suffering citizens.

The meeting demonstrated how US leadership in the region has diminished. America is leaving Afghanistan and many see the US as withdrawing from the region. Washington has left many facilities in Iraq in recent years as Iraqi militias target US forces. Turkey has been bombing US-backed Kurdish SDF fighters in Syria and the Kurds are concerned the US-led anti-ISIS coalition no longer cares about them. Gulf states fear they can no longer rely on Washington, while relationships within the region are strained chiefly by hostility between Iran on one side and the US and its Persian Gulf allies on the other. The US and Syria were both absent from the Baghdad meeting, but negotiations under the table among the attendees may be discussing how to bring Syria back into the brotherhood of Arabs and neighbors.