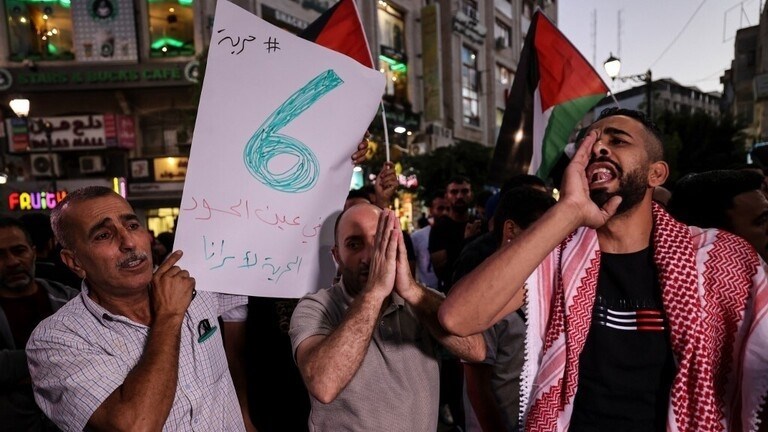 For the second day in a row, angry marches continue throughout Palestine in protest of the occupation’s treatment of prisoners, following last night’s mass marches that spanned a number of cities in the West Bank, the Gaza strip, occupied al-Quds, and the occupied 48′ territories.

In the West Bank, hundreds took part in mass protests, while resistance fighters fired on the occupation’s Jalama checkpoint north of the city. The checkpoint has witnessed four shootings in the past few days coinciding with Palestinian marches confronting the occupation’s aggression.

The marches spanned many regions of Jenin Province, with the marchers chanting statements against the occupation, holding them fully responsible for the lives of the prisoners. Two other marches headed toward prisoner Mahmoud al-Arida’s house in Arraba and Yaqoub Qadri’s house in Bir al-Basha village.

Other marches also took place in Tulkarm and Ramallah, with protestors in the latter heading toward the Beit El military checkpoint, and at the same time, Palestinians confronted the occupation’s aggression near the northern entrance of the city of al-Birah.

Palestinian youth in Beit Lahm also confronted occupation forces who had suppressed a march in support of the four captured prisoners using teargas and sonic grenades.

In al-Khalil, resistance fighters fired on occupation forces in the Jisr Halhoul area, north of the city, with one youth being injured by occupation fire.

Palestinian refugee camps in Lebanon commemorated the “snatching freedom” week, in support of the prisoners’ steadfastness and struggle. The movements included marches and vigils spanning all camps in Beirut, the North, the South, and the Bekaa, calling for the need to protect the prisoners, and blaming the occupation for any harm that might befall them.