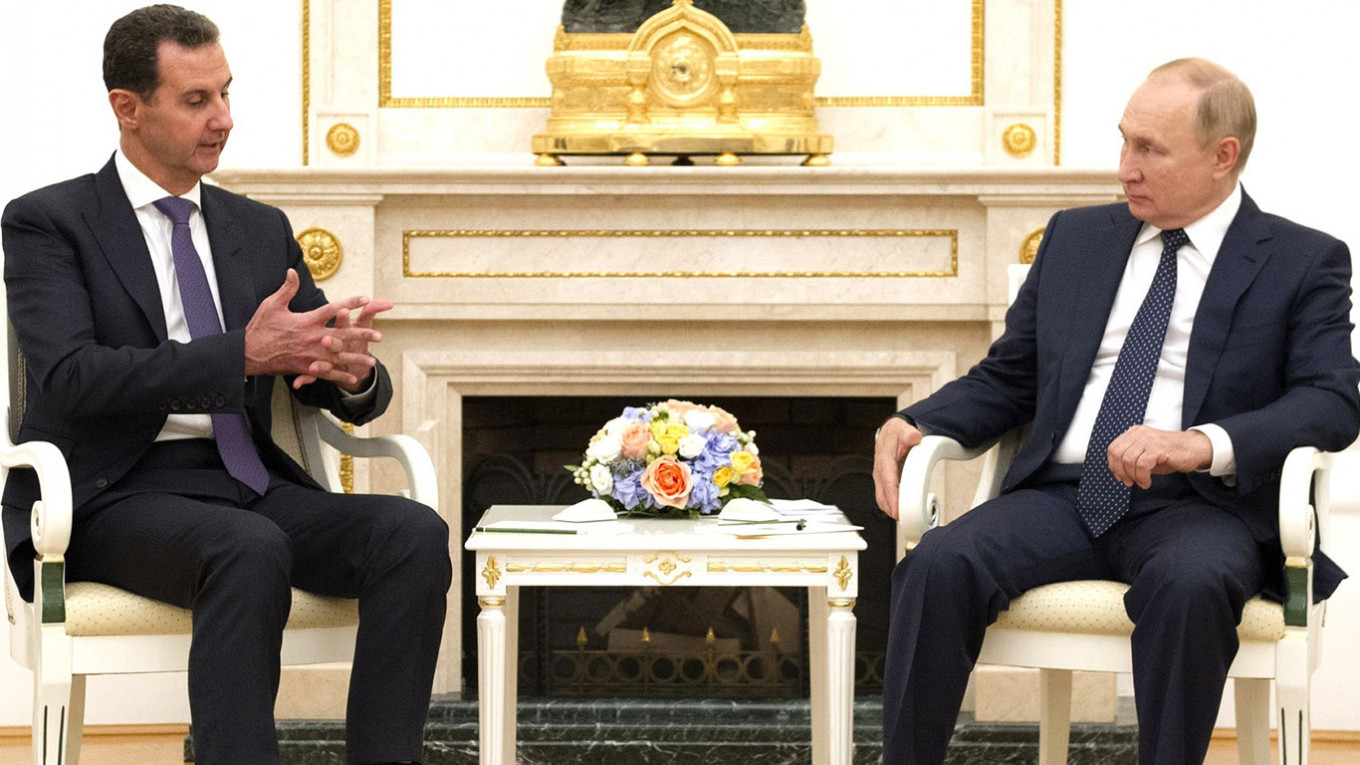 Syrian President Bashar al-Assad met with Russian President Vladimir Putin in Moscow on September 13 in a rare face-to-face meeting.  Assad brought a high-level delegation with him for talks on all aspects of the Syrian crisis which has dragged on for 10 years. Publically released details of the private meetings are scarce, but experts expect they included how to clear Idlib from Al Qaeda terrorists, and how to deal with Turkey and the US who both are illegally occupying sections of Syria, contrary to UN rules and international law.

Where are the hot spots in Syria, and who is heating them up?

After 10 years of war, Syria is now enjoying the greatest peace in many years.  The capital, Damascus, is calm and safe.  Aleppo, the industrial center of Syria, is back to work and peaceful.  Homs, Hama, and the entire coastal strip are business as usual.  Travelers and truck drivers are crisscrossing highways connecting major cities daily without fear, excepting the M4 highway connecting the Port of Latakia with Aleppo is still a no-go zone due to Al Qaeda being in control of Idlib. Securing the safety of the M4 highway was part of an agreement signed by Russia and Turkey; however, Turkey failed to implement their part of the agreement.  Turkey was supposed to obtain guarantees of safety from the Al Qaeda terrorists they are supporting in Idlib but failed to do so.  Since then, Idlib has been sitting in a stalemate, with neither Turkey withdrawing support of the terrorists, nor Russia and Syria beginning a final bombardment to free the civilians from Al Qaeda occupation.

The conflict in Daraa has ended with a Russian mediated peace deal, which saw hundreds of armed men lay down their arms and civilians returning to their homes.  The conflict heated up during summer, and it took months of negotiations between the Russian Center for Reconciliation and the armed men to resolve the situation.  A previous peace deal had been shattered by the armed men who were using motorcycles to assassinate Syrian soldiers at area checkpoints.  It is still unclear who funded these armed men with large amounts of US dollars, and where their weapons and ammunition came from, though it is thought to have come from the US military base in Jordan which borders Daraa.

Afrin and much of the Turkish border region north of Aleppo is occupied by the Turkish military and their non-Turkish mercenaries who are following Radical Islam.  The area had been home to a large Kurdish community, but the Turks ethnically cleansed the area and re-settled Arabs who are following the Muslim Brotherhood political ideology, as does President Erdogan of Turkey.  The US and Turkey are both NATO partners, and in the past had good relations, but they are on opposite sides in the North East of Syria.  The US partnered with the Kurdish militia, SDF, in the fight to defeat ISIS.  Turkey regards the SDF as a terrorist organization.  Experts believe that the recent meeting in Moscow may have discussed ways to repair relations between the central government in Damascus and the political wing of the SDF.  Most analysts see the US pulling out of Syria, and the Kurds making a deal with Damascus, which would unite the country and restore the border security with Turkey and Iraq.

The UN and EU officials want to prevent Syrian refugees from returning home.  This is a political position they have taken, in support of continuing the war and pressure on the Syrian government.  If the UN and EU support allowing Syrians to go back home, it would be a signal that the war is over, and the Syrian government won its battle against international and domestic terrorists.

By keeping the Syrian refugees in Europe and camps in Turkey, Jordan, and Lebanon the UN and EU perpetuate the myth that the Syrian war continues and pressure must be kept on the Syrian government to prevent rebuilding and restoring law and order to the only secular country in the Middle East.

The UN and EU follow the US and NATO foreign policy on Syria. It was the US and NATO which designed the 2011 attack on Syria and the Syrian civilians.  They had several projects going on at the same time: Libya, Egypt, and Syria.  The US and NATO were more successful in Libya and Egypt, but Syria offered resistance to their mission to destroy the country and armed forces to effect ‘regime change’.

The US, UN, and EU are united in their insistence that refugees not be allowed to return home, because they are against rebuilding and restoring Syria.  They need to keep the refugees far from home, and regardless of the dismal conditions some of them live in tents in the mud and snow, they need to show those suffering faces to the world to keep their narrative going that Syria is not recovering.

Denmark has decided to ask Syrian refugees to return home to safe locations, such as Damascus.  The EU has been dictatorial in their denunciation of Denmark’s right to decide who lives in Denmark.

Who wants the Syrian war to continue forever?

Recently, the US finally shut down the longest war in their history, that of Afghanistan.  At only 10-years, compared to 20-years, the war in Syria still sees US troops guarding and stealing the oil in North-Eastern Syria.  By stealing the oil, the US prevents the Syrian civilians from electricity and gasoline.  The US, UN, and EU want the conditions for civilians in Syria to be so dismal that the refugees will not want to return home.  These are political decisions by the US, UN, and EU which are in direct conflict with the Syrian civilians’ human rights.

When a police detective starts an investigation, they often will say, “Follow the money.” There are people, companies, and organizations which are warlords and are making money off the weapons and equipment provided to the Al Qaeda terrorists holding Idlib, and the Kurdish SDF holding the North East along with the US military.  Bullets, guns, missiles, tanks, and other items, including food, clothing, medical, and cash payroll come from various US-allied sources, such as Turkey, Qatar, and Saudi Arabia.

The reality on the ground in Syria

The reality in Syria today, is that there is one hot spot: Idlib.  This most likely was a major focus of the recent Putin-Assad meeting.  The civilian population is thought to be about three million.  They are not the original inhabitants of Idlib, who mainly fled years ago to avoid the fighting.  The people living in Idlib today are a mixture of Syrians who support the terrorists and are the families of armed fighters who were moved there from various peace deals in past years, and foreign terrorists from western democracies, as well as the Uyghurs from China, following Radical Islam, and Al Qaeda and allied terrorists.  The group that holds Idlib today is Hayat Tahrir al-sham, formerly called Jibhat al-Nusra, formerly called Al Qaeda in Syria.  Regardless of the succession of name changes, the group, and its ideology remains the same.

Recently, Senator Mitt Romney bemoaned the fact that the US under Biden had left Afghanistan while Al Qaeda is still prevalent there.  He failed to mention that the US supports and defends Al Qaeda holding Idlib while denouncing Al Qaeda in Afghanistan. Each time that Russia or the Syrian Arab Army attacks Al Qaeda positions in Idlib, the US and its allies denounced the attacks.  The US and its allies have brought up attacks on Idlib repeatedly at the UN, in an act to defend terrorists holding civilians’ hostage, while pretending Al Qaeda are the good-guys and the Russians and Syrians are the bullies.

There are thousands of foreign women and children who are held as prisoners by the US-allied SDF in the North East region of Syria.  Many are from western democracies, who have refused to bring them home.  Children are innocent victims of war and Radical Islamic ideology.  The rights and protection of children should be of utmost importance to the US, UN, and EU; however, these children are facing living out their lives in a squalid prison camp in Syria, because of western democracies’ failures.

The battlefields are quiet. The Syrian people suffer from a lack of electricity, a short supply of gasoline and cooking gas, and hyperinflation has priced basic foods out of the reach of many.  The Syrian people want to live and rebuild their lives, but the US and EU sanctions prohibit importing any materials from abroad.  Hospitals find it difficult even to import life-saving drugs, which should be exempt, but in reality, are part of the chess game used by the US and its allies to punish the Syrian people for their resistance and steadfastness in the face of a 10-year onslaught for ‘regime change’.