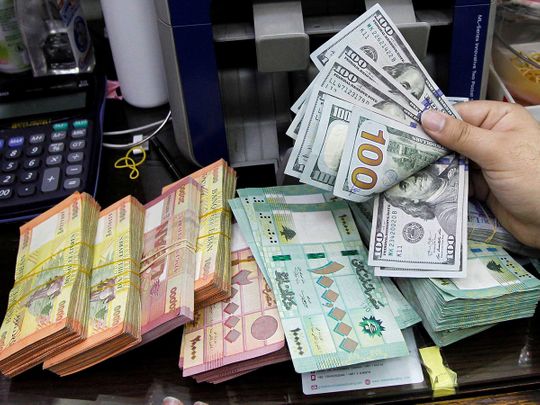 Lebanon Central Bank Governor Riad Salameh has denied statements made that the bank was bankrupt.  Salameh has led the bank for 30 years and claims it is going about its legally-mandated role despite losses in the financial sector.

“Despite the losses sustained by Lebanon’s financial sector, which are being addressed in the recovery plan that is currently being prepared by the Lebanese government in cooperation with the International Monetary Fund, the Banque du Liban is still exercising its role entrusted to it under Article 70 of the Monetary and Credit Law, and will continue to do so,” he said.

His denial came after Deputy Prime Minister Saade Shami said, “Unfortunately, the state is bankrupt, as is the central bank, so we have a problem … the loss has occurred.”  He had been speaking about the state’s inability to contribute significantly to bridging financial sector losses, “which means it has no liquidity.” He added that the losses will be distributed among the state, the Banque du Liban, banks, and depositors. Cash withdrawals in foreign currency in Lebanon have been strictly limited since 2019 due to the ongoing economic crisis.

Riad Salameh refused to appear before Judge Ghada Aoun to answer questions about his possible money laundering activities. According to France24, the investigation rests on several apartments owned by Riad Salameh in Paris. He is also accused of smuggling money out of Lebanon. Salameh’s brother, Raja, and his Ukrainian business partner, Anna Kosakova, are also accused of money laundering. The Judge has referred the case against both Salamehs to Judge Noula Mansour of the 1st court of Mt. Liban.  The Swiss have frozen Riad Salameh’s accounts and accused him of stealing $300 million of Lebanese money. He also faces accusations of money laundering, stealing, and tax evasion from the UK, France, Belgium, Germany, and Luxembourg, while those countries have frozen his accounts.

Since 2019, Lebanon has been experiencing the worst economic crisis since the end of the civil war (1975-1990).  The financial collapse incurred by the banking system is estimated by the government at about $69 billion.

Lebanon’s economic crisis ranks among the world’s top three crises since the mid-19th century, according to the World Bank’s Regional Director, Saroj Kumar Jha, who on Monday described the current crisis as the worst in Lebanese history.

In March 2020, Lebanon’s economy collapsed after it defaulted on about $31 billion of Eurobonds, with its currency sinking more than 90 percent against the dollar on the black market.  Talks with the International Monetary Fund continue as inflation in the country soared an annual 215 percent in February.

About 80% of Lebanon’s population now lives under the poverty line, with 36% in extreme poverty, according to the UN, and people can’t access basic goods, including food, water, healthcare, and education, while widespread power outages are common due to fuel shortages.

The financial implosion was caused by decades of political corruption and bad banking policies. The wealthy ruling elite has become richer, while the citizens have become poorer. This social inequity caused violent street riots as protesters demanded the government step down.  Lebanon is ruled by a sectarian political system by which various religious sects control power and money.

On Monday, the ‘Lebanon Reform, Recovery, and Reconstruction Framework’ meeting were chaired by Prime Minister, Najib Mikati, and in joint coordination between the UN, EU, and the World Bank in Beirut.  Jha, of the World Bank, said, “the national reform program led by Mikati, but if this program does not do well, it will lead to a greater deflation of the economy and will lead to a crisis in economic and social conditions.” He believes that “there is a need for a reform plan that includes a financial program, debt repayment, restructuring the financial and banking sector, and developing social protection systems.”

Mikati said, “The government is working through the relevant authorities in the public sector to unify a single and comprehensive vision for development, recovery, and reform among those concerned, and we are close to completing the unification of this vision to implement the necessary reforms.”

Lebanon needs to carry out various reforms and measures to secure financial assistance and unlock billions of dollars of aid from donor countries and institutions, such as the International Monetary fund.

Lebanon applied for a $10bn IMF bailout package in May 2020 but stalled due to internal bickering among the various political factions in the country and a lack of consensus on the size of the debt and losses on the balance sheet of the central bank. A proposed government financial rescue plan earlier this year estimated a roughly $70 billion hole in the financial sector.

On Saturday, a Turkish ship carrying 58 truckloads of humanitarian aid arrived in Tripoli under the coordination of the Turkish Disaster and Emergency Management Presidency carrying 960 tons of food.

On hand to greet the arriving aid was Turkish Ambassador Ali Baris Ulusoy, head of Lebanon’s High Relief Committee Maj. Gen. Muhammad al-Khayr, and Tripoli Port manager Ahmet Tamir.  Ulusoy confirmed 524 tons of food have arrived last week, and 80 tons of food were delivered to the Lebanese Armed Forces at the Port of Beirut on Friday.

Maronite Patriarch Beshara al-Rahi said, “I had previously said that there should be a probe into the central bank governor and all ministries and funds, but the prosecution of a single person exclusively is rejected and this is not justice.”

He stressed that President Michel Aoun’s term should not be extended, and he called for “reevaluating” the 1989 Taef Accord, which was a plan to eliminate the sectarian political system in Lebanon, which many feel is the root cause for much of Lebanon’s ills.

Many experts feel sectarianism will not end until religious groups stay out of politics, and political parties are formed and run based on a political ideology.

“The constitution stipulates that the President cannot renew his term and this is what I advocate. We must elect a new president two months before the end of President Michel Aoun’s tenure,” al-Rahi said in an interview on LBCI television. He added, “We want a president who can unify the Lebanese and who can carry the constitution and implement it without fear.”

“In the presence of new faces, we can achieve change. The era of blocking roads has ended. Elect those whose loyalty is for Lebanon, not for foreign forces; elect those who are not running after money,” the patriarch urged.