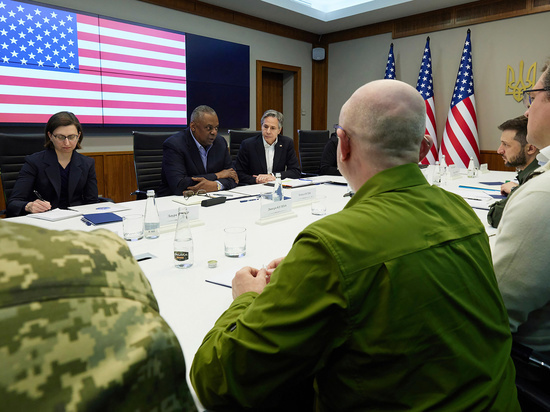 After the visit to Ukraine by the US Secretary of State and Secretary of Defense on April 24th, CNN reported on Biden’s change of strategy towards Russia. The US officials also announced new military assistance and the return of diplomats to Ukraine.

Secretary of Defense Lloyd Austin told reporters after a trip to Kyiv that “we want to see Russia weakened to the degree that it can’t do the kinds of things that it has done in invading Ukraine.” The new US goal is “to defeat Russia on the battlefield so decisively that it will refrain from any new attacks.”

A representative of the National Security Council balanced his speech claiming that the US efforts “are aimed at the Russian defense industry in order to undermine Russia’s economic and military power.”

The shift is only a change of the US rhetorics. The US officials allegedly did not speak about the real goal to weaken Russia on the battlefield and according to the CNN  they made it clear that a peaceful settlement could be reached.

Today Washington officially declares the reason of the years-long military support to Kiev that is to inflict such severe military damage to “stop Moscow forever”.

Biden administration officials are optimistic that that is an achievable goal, sources told CNN.

In fact, there is no real shift in US policy today, Washington simply do not hesitate to declare real goals, striving to play the role of a global savior, since the population of the so-called “international community” is ready to accept the openly bellicose rhetoric of the United States, especially after the staged massacre in Bucha. Washington’s tactics have not changed for years. The Kiev regime and the West openly declare their unwillingness to end the conflict by diplomatic means and that they are aimed at prolonging the war as long as possible, paying with the lives of Ukrainian soldiers and civilians.

Recent statements by Lloyd Austin clearly demonstrate the US policy that is pushing Europe towards World War III.