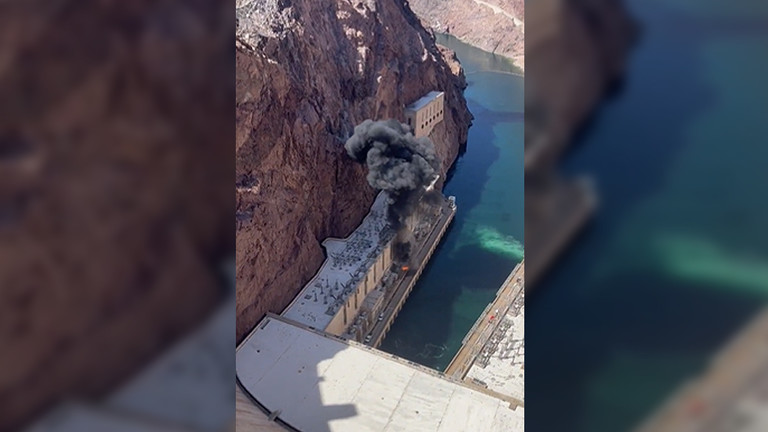 A fire broke out after an explosion at Hoover Dam, a major hydroelectric power plant on the border of US states of Arizona and Nevada, on Tuesday morning. The fire was put out by the time firefighters from nearby Boulder City arrived on the scene, but the moment of the explosion was captured by a tour group.

“My goodness, something just blew up,” someone can be heard saying in a short video posted on Twitter by Kristy Hairston, a writer based in Nashville, Tennessee who was visiting the dam with a group of other tourists. A pillar of thick black smoke can be seen rising from the power plant at the bottom of the dam.

Hairston’s video was posted at 10:11 local time. BY 10:51, Boulder City officials said the fire had been extinguished before their fire brigade arrived on the scene.

According to the publicly posted plans of the dam, the explosion took place in the area housing the turbines and transformers. The causes of the explosion and fire, or the extent of damage caused, are as yet unknown.

The Bureau of Reclamation (BoR), a federal water management agency that operates the dam and controls water in the western US, has not issued a statement on the incident as of 2pm Eastern time on Tuesday.

The massive dam across the Colorado River, named after former president Herbert Hoover,  was built between 1931 and 1936, during the Great Depression. It created Lake Mead, the largest water reservoir in the US by volume, when full. The nearby Boulder City, southeast of Las Vegas, initially housed workers employed in the dam’s construction. Over 100 people died in the process of surveying and building the landmark.

The power plant is capable of producing 2,704 megawatts and powering a million homes at full capacity, but the recent drought affecting the southwestern US has led to declining water levels in Lake Mead, and cut the power production by a third, a Bureau of Reclamation spokesman told local media in May.

The Hoover Dam is a major tourist attraction, with up to seven million visitors a year, according to the US National Park Service. It was recognized as a civil engineering landmark in 1984 and a historic place in 1985.