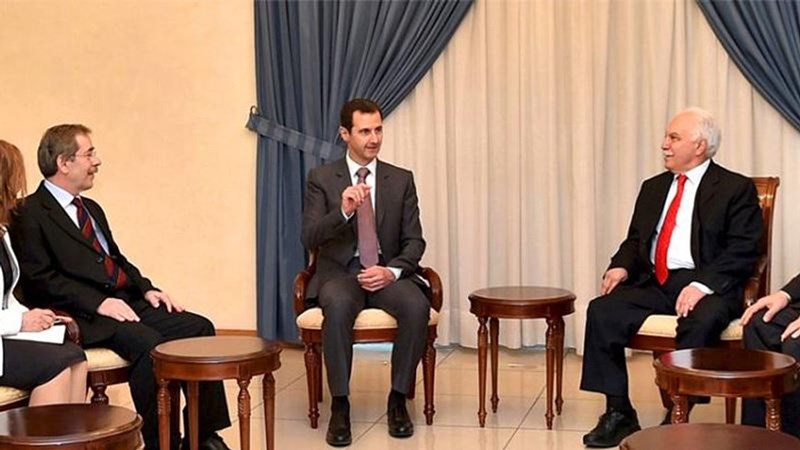 The head of the Patriotic Party in Turkey says several Turkish officials will accompany him on his trip to Syria where he will meet with the Syrian President.

The head of the Patriotic Party (Vatan Partisi), Dogu Perincek, revealed that his party is preparing a delegation to travel to Syria, pointing out that several Turkish officials will accompany him on his trip to Damascus.

Perincek told Birgum newspaper that the exact date of the visit will be determined based on the plans of Syrian President Bashar Al-Assad.

It is noteworthy that in March 2015, Perincek headed a delegation that met with Al-Assad and a number of Syrian officials.

Officials from the Patriotic Party recently announced that they will head to Damascus in the coming weeks to meet with the Syrian President.

In a related context, the Turkish Interior Minister, Suleiman Soylu, announced last week the arrest of two people who attempted to burn a Turkish flag in the city of Azaz, northern Syria, which is controlled by the Turkish forces.

Thousands of supporters of armed groups took to the streets last week to protest against Turkish Foreign Minister Mevlut Cavusoglu for proposing reconciliation between the Syrian government and the opposition factions.

Turkey’s top diplomat revealed that he had a brief meeting with his Syrian counterpart Faisal Mekdad in October in Belgrade and that communication between the two countries’ intelligence agencies had resumed.

Cavusoglu added, “We have to somehow get the opposition and the regime to reconcile in Syria. Otherwise, there will be no lasting peace, we always say this.”

He also stated that there must be strong administration in Syria to prevent any division of the country, adding that “the will that can dominate every corner of its lands can only be achieved through unity and solidarity.”

Supporters of the so-called Turkish-backed National Army took to the streets in major northern cities including Azaz, Al-Bab, and Afrin to protest Cavusoglu’s comments.

Some protesters burned the Turkish flag, while others removed Turkish flags displayed throughout major northern cities.

Meanwhile, armed groups summoned supporters to protest in major northern cities, which are under the control of Turkish forces, under the slogan: “No reconciliation”.

Activists confirmed that dozens of demonstrations took place in several areas of Idlib and Aleppo’s countryside, emphasizing their rejection of Cavusoglu’s proposal, which contradicts Turkey’s claims that the Syrian state is obstructing the country’s political process.

Turkey has no eyes on the territory of Syria

This comes as Turkish President Recep Tayyip Erdogan claimed on Friday that Ankara’s main contention is the “fight against terrorism” in northern Syria, adding that the US continues to support terrorism there.

“It is the US and coalition forces that primarily feed terrorism in Syria. They did it brutally and they still do it. They did not get tired of it, and they also made the same feeding in Iraq. To whom? Again to terrorist organizations. If there is unrest in Iraq today, unfortunately, America lies behind it,” the Turkish President indicated.

He claimed that Ankara is not eyeing Syria, adding that Syria’s territorial integrity is important to Turkey.

“We do not have eyes on the territory of Syria because the people of Syria are our brothers. We have no such problem there. The integrity of their territory is important to us. The regime must be aware of this,” Erdogan said.

Responding to a question about possible talks with Syria, Erdogan said, “We need to know and accept this for once. Political dialogue or diplomacy between states can never be cut off. There are always these kinds of dialogues, there should be.”

However, a couple of days ago, Syrian Defense Minister, General Ali Mahmoud Abbas, stressed “the necessity of ending the American and Turkish occupation of Syrian territories in order to extend the State’s control over them and to be able to invest in their resources that are subject to looting and theft.”