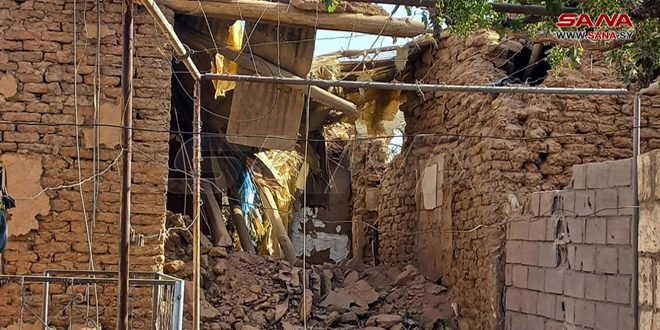 The terrorist organizations backed by the Turkish regime have renewed their artillery attacks on the safe areas in Tal Abyad and Ain Issa in the northern countryside of Raqqa.

Local sources told SANA that, during the past hours, the mercenaries of the Turkish occupation targeted with heavy artillery the residential neighborhoods in the villages located in the vicinity of the cities of Tal Abyad and Ain Issa in the northern countryside of Raqqa, which resulted in material damage to some houses and infrastructure.

The sources added that the Turkish occupation and its mercenaries have recently intensified their attacks on these areas to push the people to leave them, and allow terrorist organizations to seize the homes of the people and agricultural crops, as they did in many areas in the countryside of Hasaka, Raqqa and Deir Ezzor.

On Aug. 16th, a number of civilians were martyred and others were injured in an artillery shelling attack launched by the Turkish occupation forces on residential areas in the villages of al-Mu’allaq and Saida and in the vicinity of the M4 international highway and the western countryside of Tal Abyad, north of Raqqa.