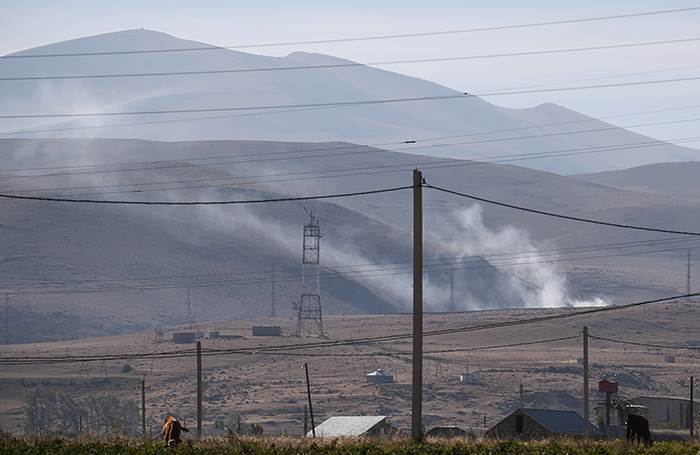 Since the morning of September 14, the situation on the Armenian-Azerbaijani border has been heating up again.

The Azerbaijani Defense Ministry, accused the Armenian Armed Forces of shelling the Azerbaijani military positions in the Kalbajar district and stated that the army units “are taking retaliatory measures.”

On the other hand, the Armenian Defense Ministry reported a major escalation on the border with Azerbaijan. Shelling was reported  in the area of the Sotk—Goris border.

Armenian Ombudsman Kristine Grigoryan said that at least 2.5 thousand people were evacuated from the border areas due to shelling. As of Wednesday four civilians were wounded.

Yerevan acknowledged deaths of at least 49 Armenian servicemen in the recent escalation. In turn, Baku claimed that it was ready to unilaterally hand over to Armenia up to 100 bodies of the Armenian servicemen who died as a result of the conflict on the border on September 12-13, the statement of the Azerbaijani State Commission for Prisoners of War, Hostages and Missing Citizens says.

Armenian Defense Ministry spokesman Aram Torosyan claimed that the Russian vehicles of the Federal Security Service (FSB) came under Azerbaijani fire near the village of Verin Shorzha in the Gegharkunik region of Armenia. They were reportedly carrying out a humanitarian mission. The Azerbaijani Defense Ministry has rejected accusations of firing on a vehicle of the FSB of the Russian Federation.

According to some unconfirmed reports spread on the social media, the target of the artillery of the Azerbaijani Armed Forces was the permanent deployment point of the Russia’s Border Service of the FSB in the Armenian Gegharkunik region.

The reports are yet to be confirmed.