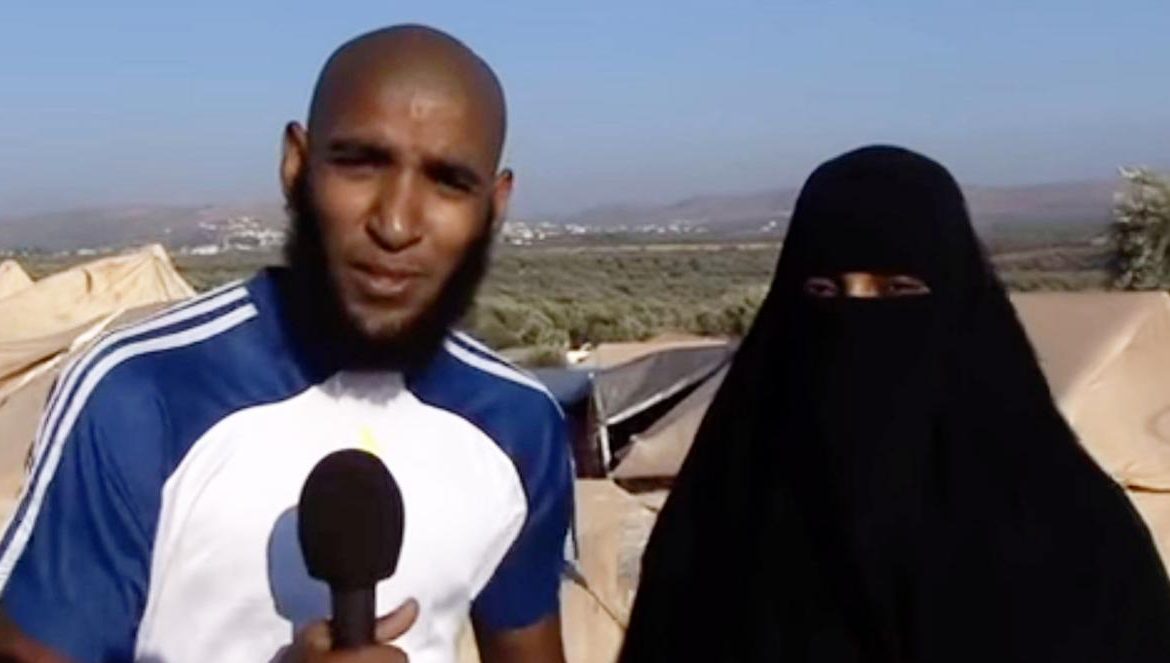 Tauqir Sharif was abducted from his residence in Idlib, near the Turkish border, on June 22 by members of the Syrian branch of Al Qaeda, HTS.

“Late last night they searched our house looking for anything and tried to get me to carry my children who were sleeping out of the house. I refused and said there is no way I’m waking them up to have them see this sight of masked men coming into their home,” Racquell Hayden-Best wrote in a Facebook post.

Tauqir, 31, from Walthamstow in East London lives with his British wife, Racquell, and their five small children in Idlib, the only Al Qaeda terrorist-controlled city in Syria. He describes himself as a British Pakistani East Londoner, and adds, “I am a product of London. What I learned while in the UK was British values that have shaped me – good, universal values.”

“I’m not a fighter,” said Tauqir adding, “But I do follow the opinion that some of the people being branded as terrorists should be hailed as heroes.”

“That’s not to say he’s never fought in some capacity because Syria is complicated and often there’s no such thing as straightforward ‘good’ and ‘bad’ guys,” said Shiraz Maher, the director of the International Centre for the Study of Radicalisation at King’s College.

In 2012 Tauqir and Racquell traveled to Syria as leaders for the first “Aid Convoy” from Britain to Syria, using ambulances to take in food and medical supplies, under the leadership of Usman Ali, and accompanied by Marcus Solak.

The couple stayed and founded a Facebook page “Live Updates from Syria”.  They claim to have distributed British charity donations to Syrians in Idlib and to have taught Islamic lessons to Syrian Muslims.

Racquell was excited to travel to Syria as a young bride, despite the dangers of giving birth in a war-zone five times. “I had a very protected upbringing,” she said. “I wanted to get out and see the world. Life in the UK, it was depressing, it was like a robot life, doing the same things every day. Now Tauqir is doing what he wants to do. I’m happy because he’s happy.”

“I know people are saying it’s strange that as the war in Syria is coming to an end, people coming out of Isis are claiming to be aid workers,” Tauqir has said.

Tauqir admitted that since he arrived in Syria he has carried a handgun and has used an assault rifle.  “The handgun is for my self-defense and that of my family. I’ve not had to use it. There have been threats to my life because I distribute aid. It’s highly dangerous work in conflict zones. We have to protect not only the aid but also ourselves. Up until early 2017, I used to carry an assault rifle. Yes, I’ve fired it, shooting back at people who shot at us, who want to kill us. We’ve been in situations where we have been surrounded and had to ‘engage’ to get ourselves out. You could say technically that is a combat situation, but we only fire back in self-defense. I haven’t killed anyone – not to my knowledge.”

In May 2017 the UK Home Office informed Tauqir that his citizenship was revoked, along with two other Brits in Idlib.

The letter stated that under section 40(5) of the British Nationalities Act 1981, he was to be deprived of his British citizenship as he had been assessed to be “aligned with an al-Qaida-aligned group”. His return to the UK would present a risk to national security.

The Home Office has announced anyone traveling to Syria faces arrest and could even lose their passport.

The British preacher, Usman Ali, has been banned for life in 2007 from entering the Mosque at Woolrich, London after the judge found that Ali had shown a video to children in the mosque containing clips of planes flying into the world trade centre on 9/11 during which he chanted “God is great“.

Marcus Solak, aka Deniz, was one of four Britons arrested at an ISIS safe-house in Istanbul in 2016, along with Aine Davis from Hammersmith, who has been exposed as one of the ISIS “Beatles”.  Solak was a member of the “Aid Convoy” to Syria in 2012 along with Tauqir Sharif.  Solak claims to have been involved with an Islamic school project in 2013 in Syria and having moved to Turkey in 2014.

“Aid Convoy” came under police investigation in 2016 amid concerns that cash was being funneled to ISIS and Al Qaeda fighters in Syria, some of which was donated by primary school children in Britain.

In 2014 the UK Charity Commission warned that aid on convoys to Syria may be abused for non-charitable purposes.  In 2012 the UK convoys to Syria seemed innocent, but by 2014 the UK authorities were learning more, and the general attitude toward Britons going to Syria was viewed as potential fighters.

In July 2014 the Kent police questioned a convoy of nine Britons traveling to Syria in three ambulances packed with food and supplies. Kasim Jameel, a British Pakistani, complained that the police had confiscated 25,000.00 pounds in cash destined for Syria.

Syria has a secular government based in Damascus; however, the Syrian population is over 80% Sunni Muslim, with the remainder divided between Christians, Druze, and Shiite.  Syria has freedom of religion, and all sects are allowed to worship. For centuries Damascus has been seen as an important center of Islamic study.

“We want to teach them Islamic studies,” said Racquell. “I feel it’s important as a woman I should be here and show the support to the sisters.”

Muslims in Syria are wondering why they would need Pakistanis and Britons to teach them their religion.  Are the lessons these Brits are teaching in Syria Islam, or a perverted view of Utopia: the Islamic State?

By 2014, UK authorities were aware that dozens of young British women were being brainwashed online to become sex-slaves in Syria.  They were targeted in skillful social media contacts and apps on mobile phones by British terrorists in Idlib, and some of the girls, as young as 16, made the journey from the UK to Syria to be passed from man to man.

The International Centre for The Study Of Radicalisation (ICSR), based at King’s College, London, said they had monitored 28 Western women, including Brits, who are living in Syria and may be “Jihad Brides”, including Racquell Hayden-Best.  They observed both Racquell and her husband Tauqir Sharif have supported ISIS and regularly contact known jihadists on Twitter who they hail as heroes.

In an April 2014 Channel 4 News package by Home Affairs Correspondent Darshna Soni, she interviewed Tauqir Sharif. She described him as an Essex lad from Chingford who was driving an ambulance, regardless of having no medical experience.

She asked what motivated the Nottingham University graduate to risk his life in Syria, and he replied, “I feel it’s the duty of all Muslims to help.”

Who is in control of Idlib?

Idlib, in north-west Syria, has been controlled by Hayat Tahrir al-Sham (HTS), designated as a terrorist organization by the United States, and

linked to Al Qaeda. The Sunni Muslim group was formed in January 2017 by a merger between Jabhat Fateh Al-Sham, the Ansar Al-Din Front, Jaysh Al-Sunna, Liwa Al-Haqq, and the Nour Al-Din Al-Zenki Movement.  These are the terrorists who Tauqir and Racquell have chosen to live among while exposing their five young children to fear, violence, and death.

His Facebook page lists the cleric who influences his mind.  Shaikh Abdul Aziz Al-Tarefe is one of the leading state-sponsored clerics in Saudi Arabia.  On June 17 on his Facebook page, the cleric stated, “The separation of Religion from politics began in the West; that is because their Religion was corrupt.  Whoever advocates for the removal of Islam from politics, either does not believe in Allah as the Creator, or does not believe himself to be a created being, or is (outright) opposing the truth.”

When Tauqir Sharif married Racquell she was just 18, and they had their first child in Turkey, on the border with Idlib. The UK has not issued a passport for the child, and they now have five children.  Many experts accuse parents, who insist on living with very young children in a terrorist-controlled war-zone like Idlib, of child abuse.

They are not Syrians and have no historical or familial connections to Syria.  Why would these British people insist on living with five small children in Idlib, when they are admittedly fearing for their own lives, to the point of being armed at all times, and Tauqir has been kidnapped, leaving a young wife and 5 very young children in danger from Al Qaeda terrorists?

The charity funds for Tauqir and Racquell in Idlib

Using social networks, television fundraisers, and other crowdfunding appeals, Tauqir has raised millions of pounds over eight years for scores of charitable projects in Idlib.

The current fundraiser reads online: “The war continues and the oppressed are crying out for your help! Help us to help the people! Our team is of the few left who are actually on the ground!”  The webpage states “This campaign will collect all funds raised by Jul 31, 2020”, and lists £376,273 GBP having been donated.

Tauqir said they’re regularly sent donations from across the UK, and showed journalists around his warehouse, which was packed full of nappies, dried foods, and other supplies are sent from UK donors.