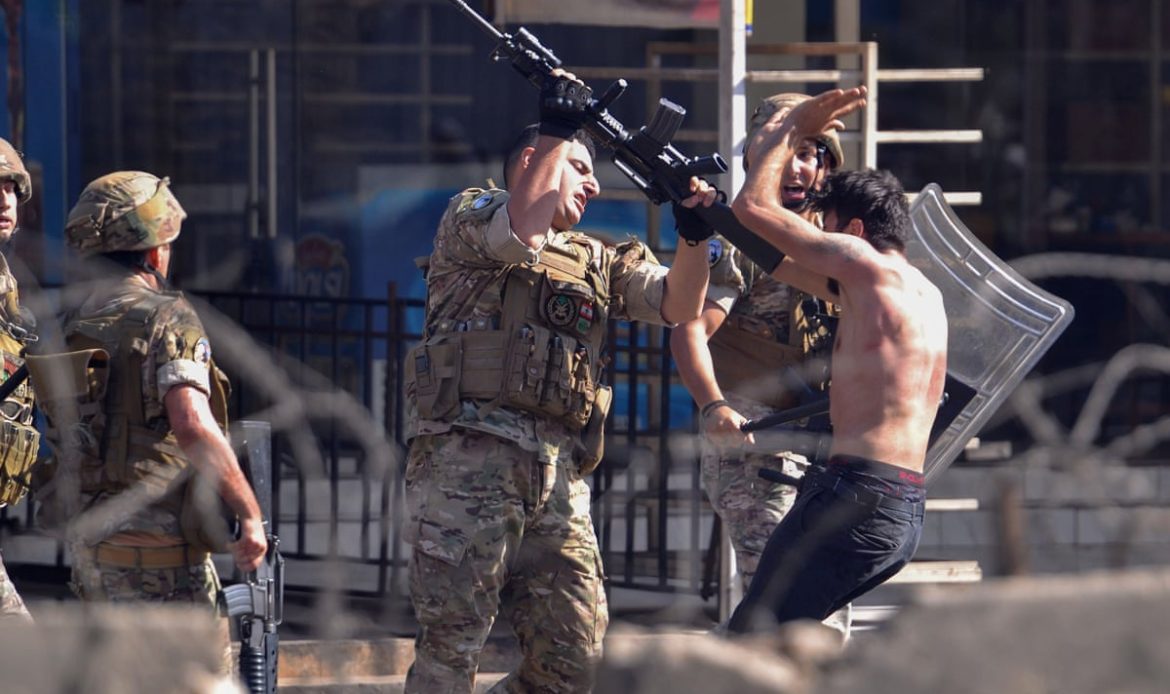 This is part two of an examination of the current state of Lebanon. In part one, we looked at the Soldiers of God, an extremist Christian militia that pose a threat to the security of Lebanon and could ignite a new civil war.

Lebanon needs up to $15 billion to rise from its present economic collapse which was decades in the making and can be blamed on the corrupt ruling elite who lined their pockets at the expense of the citizens, driving the country into financial ruin and deadly social turmoil.

Despite elections in May, still, no President has been appointed, as various political parties and factions can’t form a consensus on a person to fill the key position.  The post of Prime Minister is filled with a caretaker, Najib Mikati.

Human Rights Watch (HRW) reported this month, that Lebanon’s national government and the World Bank should take urgent action to implement a social protection system to address the rising extreme poverty which has led to hunger. Lebanon has no welfare system similar to the US and UK.

The economic crisis brought street protests in 2019 calling for the corrupt ruling elite to leave. In the meantime, four out of five households had a member who had lost their job. The devaluation of the Lebanese currency means older people on pensions are now among the extremely poor and are not eating well.  Even those who have a job, have seen salaries cut by the government and private employers.

Lebanon has no free public hospital. Routinely, patients have died outside the door of private hospitals. Many Lebanese have in the past traveled across the border to Syria to obtain free medical services.

Electricity is non-existent in many households, cooking gas is unavailable or too expensive to buy, and medicines in the pharmacies are slowly going out as merchants are unable to pay for imports due to the lack of US dollars at the Central Bank of Lebanon.

Riad Salameh, the Governor of the Central Bank of Lebanon, is under the protection of the US Embassy.  There was a previous arrest warrant issued against Salameh, but he remains free, and owning to his high level of foreign protection, it appears no one can get him out of office. He has been accused by several European countries of money laundering and illegal transactions.  It is generally accepted by financial experts on the case that he has absconded with billions of public funds.

The United Nations estimated in 2020 that by taxing the wealthiest 10 percent in Lebanon the number of those in extreme poverty would be alleviated. But, this action was never taken by the Lebanese government and its wealthy ruling elite. The right to social security is enshrined in both the Universal Declaration of Human Rights (UDHR) and the International Covenant on Economic, Social, and Cultural Rights.

The ruling elite was supported by foreign governments that allowed their corrupt practices to continue for decades. The current poverty and desperation in Lebanon today can be traced back in part to western democratic countries that opposed Hezbollah and supported Israel.

For decades, the Lebanese government has been run by policies written by the US Ambassador to Lebanon.  These policies are against Hezbollah, Iran, and Syria, and are pro-Israeli.

In November, the US warned Lebanon that they could fall under US sanctions if they were to accept the gift of fuel from Iran.  Lebanon is a failed state, and electricity is non-existent because there is no fuel to create electricity in the power stations. Lebanon does not have the money to make a fuel purchase, and gasoline stations were drying up.  Iran stepped forward with an offer of charity to benefit the Lebanese people; however, the US threatened Lebanon to not accept the free offer.

Hamed Mousavi, in the Journal of Politics and Law, 2008, wrote “The Israel-Lebanon War of 2006 and the Failure of US Foreign Policy”. Mousavi explains that the US encouraged Israel to attack Lebanon in the summer of 2006. Thousands were killed, maimed, and displaced after Israel carried out airstrikes over all sections of Lebanon. US President Bush wanted to create a new Middle East, but Israel was defeated in the war, and Hezbollah was strengthened.

On December 23, French President Emmanuel Macron said “The problem with Lebanon is that we must solve people’s problems and get rid of those who cannot do it.” He added, “Lebanon must change its leadership.”

His statements appear to be a public admission of promoting regime change in a foreign country. However, his sentiments are echoed by the Lebanese people, who took to the streets in 2019 demanding that the corrupt ruling elite leave and make way for fresh faces who are willing to work for the good of the nation. France hosted an international donor conference and raised $370 million for Lebanon.  Macron is keen to organize and promote another conference to help the tiny country which is now called a ‘failed state’.

“I care about Lebanese men and women, not those living off their backs,” Macron said referring to the ruling elite who refuse to step aside.  They have collectively made billions off of corrupt practices which became institutionalized.

Samir Geagea, leader of the Lebanese Forces (LF) is seen as the politician most connected with Saudi Arabia.

Earlier this month, Geagea said, “Saudi Arabia plays a major strategic role in Lebanon.”  He added, “The KSA has openly declared that if a new head of state, who does not inspire confidence, came to power, it would no longer contribute to providing aid to Lebanon”

In September, Geagea met with the Saudi Ambassador to Beirut, Walid Al-Bukhari, and wrote on Twitter that the only salvation for Lebanon is its “Arab depth”, and “adhering to the constitution”. Geagea referred to the need for support from Arab countries, instead of always relying on western countries to come to the aid of Lebanon.

“I noticed that the leadership in the Kingdom of Saudi Arabia is ready and willing to help Lebanon, but with the presence of a trustworthy president and government. We have the ingredients to raise Lebanon, but these ingredients need someone to implement them,” he added.

Earlier in April, some officials were skeptical of restoring ties with Saudi Arabia and other Gulf states after Hezbollah and its allies hold a great deal of political power. In the past, Saudi Arabia had invested billions of dollars in Lebanon and its upscale tourism economy.

Macron is in favor of including Iran in discussions concerning the rehabilitation of Lebanon.  This would be opposed by the US which has a hostile relationship with Iran. However, Iran is powerful in both Lebanon and Syria and is a country with resources that Lebanon could benefit from.

Iran supports Hezbollah because they are a resistance movement against the Israeli occupation of Palestine, Syria, and the Shebaa Farms region in the south of Lebanon.

Many of the young professionals who took to the streets and social media in 2019 have by now left the country in a mass migration looking for a job,  a life with electricity 24/7, gasoline to fill a car, and without corrupt leaders who are isolated in their palaces.  The streets in Lebanon are silent now because the energetic youth have moved on and the country is stagnant.

The Israeli occupation of Lebanon

In 1982, Israel invaded Lebanon and reached Beirut, but eventually retreated to the southern region which they occupied until 2000. The south was a mixture of Christian and Muslim communities living in small towns and villages with a population estimated at 180,000.  Israel found a willing partner in the Christian militia, the South Lebanon Army (SLA).

Thousands of civilians were imprisoned, tortured, or killed in the Khaim Prison, which was turned into a museum after the liberation.  In the 2006 Israeli attack on Lebanon, Khaim was destroyed by a targeted airstrike by Israeli jets.

On May 24, 2000, the Israeli troops and officers withdrew from Lebanon. However, a border area known as Shebaa Farms remains under Israeli occupation.  Several resistance groups in Lebanon demand the return of Shebaa Farms, such as the Syrian Social National Party founded in 1938.  Hezbollah is the strongest of the resistance groups.  Hezbollah is a political party as well and has won parliamentary elections. The US and Israel are against Hezbollah, but there is no other armed group today that has the capability of protecting Lebanon from a future invasion by Israel. It was their asset as a military force that allowed former President Michel Aoun to ally with them.

Lebanon is at the breaking point economically, and socially it is sitting on a tender box of sectarian issues such as the extremist Christian militia, the Soldiers of God.  Foreign countries, including Israel, may be able to use the vulnerabilities of Lebanon to push their agenda, even if it sets the country on the path to a new civil war.